The “Mean Girls” star will appear in a British TV program opposite Nick Frost and Rupert Grint. 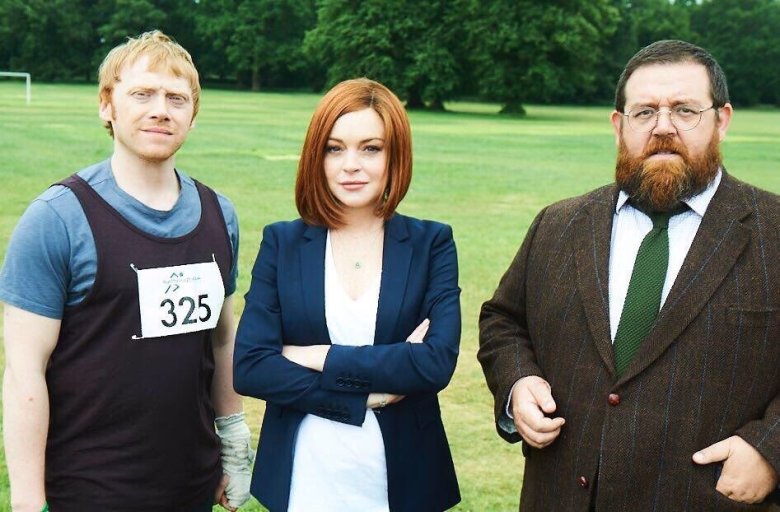 Lindsay Lohan is heading back to television, but she’s doing it across the pond.

The “Mean Girls” star has landed a role on “Sick Note,” a British comedy series that will air on Sky Atlantic and streaming service NOW TV sometime this year. The show has already been renewed for a second season, which is when Lohan is slated to show up.

READ MORE: ‘Mean Girls 2’: Lindsay Lohan Has Written a Treatment and Hopes Tina Fey Can make Time for It

“Sick Note” stars Rupert Grint as Daniel Glass, whose life hasn’t been going so well lately. He’s struggling to care about his dead-end job with his demanding boss Kenny West (Don Johnson) and is also in failing relationship. It all comes to a head when he’s diagnosed with esophageal cancer, supposedly a fatal case. Upon learning the news, everyone begins to treat Daniel better, and as a result he becomes far more invested in his life.

Unfortunately, Daniel discovers that he was misdiagnosed by the incompetent Dr. Ian Glennis (Nick Frost). On the advice of the oncologist, Daniel decides to keep the truth a secret and perpetuate the charade. What could possibly go wrong when you’re lying about having a fatal disease?

Lohan will play Katerina West, the daughter of Daniel’s boss. According to IMDb, she’ll appear in at least the first three episodes of the second season. Lohan posted the news on her Instagram and Twitter accounts a few days ago, accompanied with a picture of her costars Grint and Frost.

“Sick Note” is co-created by Nat Saunders and James Serafinowicz. Jo Sargent is an executive producer, while Sarah Fraser is a producer and David Jargowsky and Scott Aukerman are consulting producers.

Despite all of her problems though, Lohan’s abilities as a performer often shine through. They’ve set her apart from contemporaries like Hilary Duff, who is charming and entertaining but hasn’t delivered the nuanced performances that Lohan has. She’s been shown to have an instinct for hitting the right emotional notes and great comic sensibilities. Even Meryl Streep, who co-starred with Lohan in “A Prairie Home Companion” once said, “She’s in command of the art form. Whatever acting is — I don’t know what it is — she’s in command of it. I think she could do anything she puts her mind to.”

This is all to say that Lohan has the ability if only she keeps the rest of her life under control. That’s a big “if,” judging by how much of her career has been derailed before. Nevertheless, “Sick Note” could be the comeback vehicle to get her back on her acting feet. It’s not big enough to require that she carry the weight of a leading role, but it’s not an insubstantial cameo either. Plus, she can do humor. A quirky, somewhat dark British comedy is low-key enough to not put on the pressure, but just interesting enough to let her show off her ability. At only 30 years old, Lohan could still have a strong acting career ahead of her if she fights for it.