Nothing could prepare director Ryan White for the ongoing impact of the still unfolding true crime documentary Emmy contender 'The Keepers.' 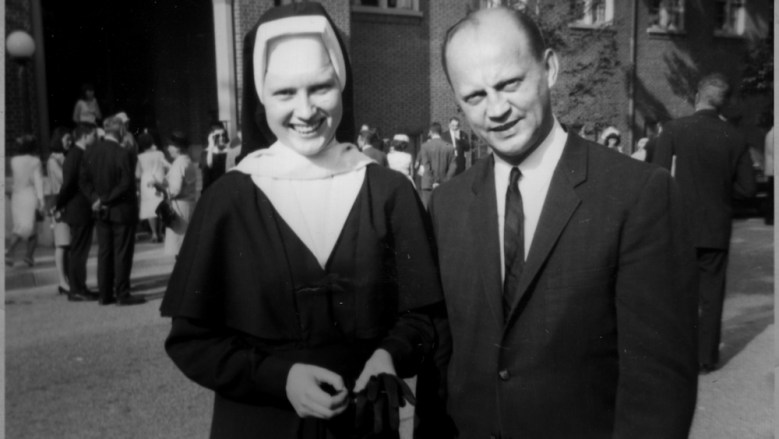 We all know the Catholic church has kept its share of hideous secrets. As “Spotlight” and other cases showed, priests have used their authority to sexually abuse underage girls and boys under the protection of the Church, which used its power to squash the press.

And yet, Netflix’s “The Keepers” is shocking. Ryan White’s docuseries blows the lid off a Catholic scandal from the ’60s, one that is still playing out. This true cold-case crime story has not been solved — and is still unfolding with new developments.

Sister Cathy Cesnik was 26 and a beloved teacher at Baltimore’s Archbishop Keough High School when she was murdered in 1969. Fifty years later, documentarian White, journalists, and former students delve into the mystery and the role the school’s chaplain, the late Father Maskell, may have played in it. Decades after they left the school, women in their 60s tell White about Maskell’s shocking sexual abuse, and the institutional corruption and cover-ups around it. White got his title from one of the survivors, who used the expression “the keepers” to refer to the women who hold on to all of those secrets and lies and keep the truth from slipping away.

The series is a strong contender for nonfiction series Emmy nominations for writing, directing, and editing, among other categories.

In 1969, Sister Cathy Cesnik disappeared; months later, her body was found in a secluded wood. In 1994 and again in 2014, “Jane Doe,” one of Sister Cathy’s former students, recounted her sexual abuse by the school chaplain. “The Keepers” reveals who she is, and fresh outreach into the community brought out 40 other women who suffered similar abuse. Over seven episodes, White unpeels the layers of this horrifying network of Catholic and government corruption and lies via extensive interviews and reenactments. White, whose credits include “The Case Against 8” and “Good Ol’ Freda,” first heard about the story in 2014 from his working-class Baltimore Catholic family. His aunt was in Sister Cathy’s class, and had been close friends with “Jane Doe” — and was stunned in 2014 when she read who she was. She couldn’t believe her friend Jean Wehner had suffered this horrific past.

White flew to Baltimore and had a five-hour conversation with Wehner. “If she wants to do this,” he told me on the phone, “I’m in 100%. I didn’t know the scope this was growing into. I didn’t think it was a Netflix series, maybe it was a feature film.”

Wehner went from being silent her whole life to confessing her most horrific secrets on camera. “It was painful for her,” said White. “She was very wary of anyone from the outside.” But it was one thing to speak to White behind the camera and then have “The Keepers” launch on Netflix May 19 to 100 million subscribers in 190 countries.

“She remained anonymous and private, and now she was suddenly a public figure,” said White, who became close to her over the past three years. “I’m on the phone with her every day hearing how the process is going for her. My hope is the story ends the silence in a loud way.”

READ MORE: Anatomy of a Disaster: Inside the ‘Buena Vista Social Club’ Sequel That Became a Fiasco

White worked closely with  freelance journalist Tom Nugent; he’d tracked the story for years, but couldn’t get it published and resorted to blog posts instead. “The story was virtually undercover,” said White. “There was not a lot of information about it. It bubbles up in the ’90s in a hearing around Jane Doe — but the institutions and the church were successful in squashing it. Then there was virtual silence for the last 25 years. Everything we were investigating or uncovering was new to us.”

Finding Gemma and Abbie, two loyal students of Sister Cathy who doggedly post everything they learn on a Facebook page, “were to me cinematic gold,” said White, “a fresh way to get inroads to a true-crime story. They were doing their [reporting] and we were doing ours. We’re covering their uncovering. They didn’t understand why we would want to document certain points of their process. But it was a way to get confrontations as they ask questions of people directly involved in the crimes about why they failed these children.”

READ MORE ‘The Keepers’ Review: Netflix’s Most Ambitious Docuseries Yet Is A Murder Mystery About Survival

At the heart of the mystery is school chaplain Father Maskell, who died a free man in 2001.”He was under the care of the archdiocese,” said White. “His path of destruction never ended with any literal form of justice. He got away with the abuse in the ’80s, fled to Ireland. The American criminal justice system and the church never did anything. We don’t have the answers. We don’t nail a perpetrator. Institutions failed. Victims are still around. The state attorney, Baltimore police, and the people in power in the legislature repeatedly blocked child-abuse assertions because of the lobbying of the Church. They will be held accountable. It won’t go as far as putting someone in jail, but putting someone accountable for what they failed to do.” White started researching the documentary before true-crime podcast “Serial” came out in 2014, which “paved the way for the episodic style of formatting,” he said. “That was when I started to wonder if there was an opportunity to tell it in a longer film format.”

He was still trying to keep his project a secret when his coproducer, Ben Cotner, with whom he worked on “The Case Against 8,” moved to Netflix as an executive. So he was the first person in the industry to see some footage at the end of 2016, and brought it to the attention of Netflix documentary chief Lisa Nishimura.

Working with her helped White to complete this women’s story. “I’m a man,” he said. “‘The Keepers’ is a woman’s story. Five female survivors appear through it — but I worked with 40. Only five are on camera. The big part of the Netflix decision was how they wanted this released in the world. This story was deliberately buried. I was the most comfortable with releasing it all at once worldwide, and not piece it out with one episode every week. Once the doomsday bandaid is ripped off, the truth is out there, and we can see how the world reacts. The Netflix model was a huge deal for me, I didn’t have to do separate deals with different countries. As of 12.01 AM May 19th, ‘The Keepers’ was out there and right now, we’re surveying how the world is reacting to it.” Ripping off the Bandaid

That aftermath has been the most challenging for White. “There’s no way to measure it,” he said. “I’d never done a Netflix project. I never felt this intimidating but powerful impact, on social media. The most horrific part that I’m feeling the most is in my inboxes.”

Like the final scene in the Oscar-winning “Spotlight,” White is fielding the equivalent onslaught of phones ringing off the hook. His inboxes are filled with reports of sex abuse from all over the world. “It’s horrifying, nauseating, they come to have me document their story. I’m proud of the product ‘The Keepers,’ but most of these days I’m nauseated trying to figure out how to grasp the idea that I wasn’t just making a story in Baltimore. I’m feeling the horrific ripple effect. It’s out there. It leaves a pit in your stomach.”

This Article is related to: Awards and tagged Documentary, Netflix, Ryan White, The Keepers