"Sami Blood” tells a very familiar story, but the hyper-specificity of its telling renders it a wholly new and quietly profound experience. 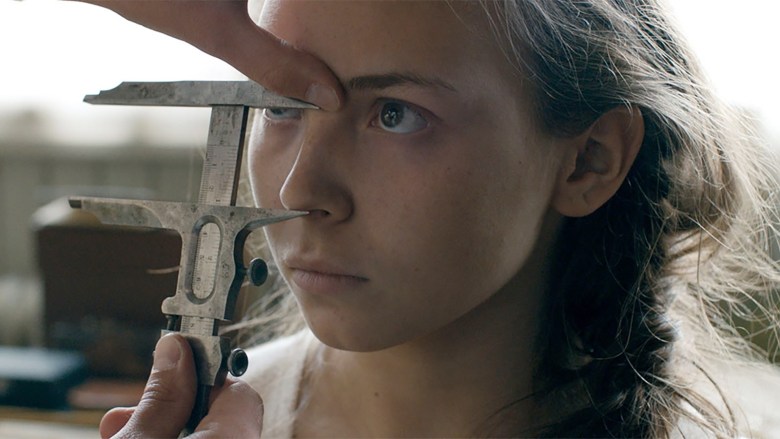 “My dad is dead. My mom has reindeer.” In many respects, 14-year-old Elle-Marja (magnetic newcomer Lene Cecilia Sparrok) is a lot like the typical kid at the heart of any coming-of-age story. Snagged between the smallness of her upbringing and the allure of the outside world, she’s hardly the first teenager who’s been forced to navigate a new identity for herself, to forge an uncertain path between where she’s from and where she’s going.

In other respects, Elle-Marja is quite unlike any other character the genre has ever seen before. Well, in one respect at least: She belongs to the Sami, a nomadic Scandinavian people who have been discriminated against for centuries, and whose fragile culture (and native land) has only become more of a target as it’s grown more vulnerable to erasure.

The remote Sami boarding school that she and her younger sister (Mia Erika Sparrok) are forced to attend might be run by a deceptively gracious teacher (Hanna Alström), but the goal of their curriculum isn’t to make it easier for them to join mainstream Swedish society, but rather to make it impossible. While the Sami are still discriminated against to this day, back in the 1930s — when the brunt of Elle-Marja’s story takes place — it was widely believed that the Sami are a physiologically inferior breed with smaller brains than the city slickers who reside in the nation’s bastions of good Christian living. Phrenology: It’s science for racists!

And so, towards the beginning of Amanda Kernell’s vivid and precise directorial debut, Elle-Marja does what so many of us might do in her situation: She disguises herself as an ordinary Swede, meets a cute guy at a local dance, and then runs away to the metropolis of Uppsala, where the streets are paved and the sex is plentiful. But it’s not so easy to turn your back on who you are, or the people who loved you for that. And for Elle-Marja, her defection is complicated further by an unshakeable sense of betrayal, a feeling that she forfeit her heritage in exchange for something easier.

READ MORE: ‘Wonder Woman’ Makes History: How Patty Jenkins Lost the Chance to Make One Big Superhero Movie, Only to Then Go on and Make a Better One

From a certain perspective, “Sami Blood” tells a very familiar story, but the hyper-specificity of its telling renders it a wholly new and quietly profound experience. Kernell, who’s half-Sami herself and who loosely based the film on her own grandmother’s experiences, displays both an exquisite fondness for the Sami lifestyle and a keen, complex understanding of its place in the modern world (it helps that she’s explored this territory before, and that much of the film’s tortured and essential framing device is comprised of contemporary-set footage from a short she made in 2015).

She shoots the early scenes with a rugged sense of documentary realism, capturing the Sami connection to nature and their history of living off the land. And even once Elle-Marja and her sister are shipped off to boarding school, Kernell steeps every frame of this film in the customs of her characters, clearly delighting in the frequent scenes of yoiking (the traditional Sami song-chants with which alternately Elle-Marja expresses herself and returns to her roots). There have been a million movies about teens who find themselves at a crossroads, but this has to be the first to include the line “Don’t yoik at school.”

“Sami Blood” is at its most compelling during the sequences in which Elle-Marja is othered and dehumanized for her lineage, the sequences in which she’s suddenly asked to pay a steep price for preserving her identity. Kernell endows these moments with a palpable sense of violence, and so we feel Elle-Marja’s crisis under our skin, we recognize that to “go and get all Swedish” would require her to sever ties as much as it would allow her to make new ones. Kernell lingers on the foreigners who visit the Sami school and touch the kids like livestock, referring to their traditional clothes as “costumes.” She dials up the sound of the flashbulb that the Western doctor uses to photograph the students’ naked bodies, each snap of the camera leaving a scar.

Most indelibly, she refuses to look away from the film’s major source of trauma, a terrible incident in which some boys carve flesh out of Elle-Marja’s ear, marking her like the Sami do their reindeer. Kernell returns to the wound time and time again, using the framing device to illustrate how some cuts can fester for decades before they heal. “Sami Blood” waits too long to wrestle with the more permanent effects of the attack on Elle-Marja, as the second half of the story, in which the girl tries to find a place for herself among the city folk, is far too protracted and emotionally diffuse for the story to maintain its blunt power. But its difficult, knotted conclusions — and the expressiveness with which Kernell’s young cast bring them to life — make this an extremely promising debut, as well as a valuable story about who we are, and the extent to which we get to decide that for ourselves.

This Article is related to: Film and tagged Reviews