The cancelled drama, created by the Wachowskis and J. Michael Straczynski, deserves a chance to end properly. 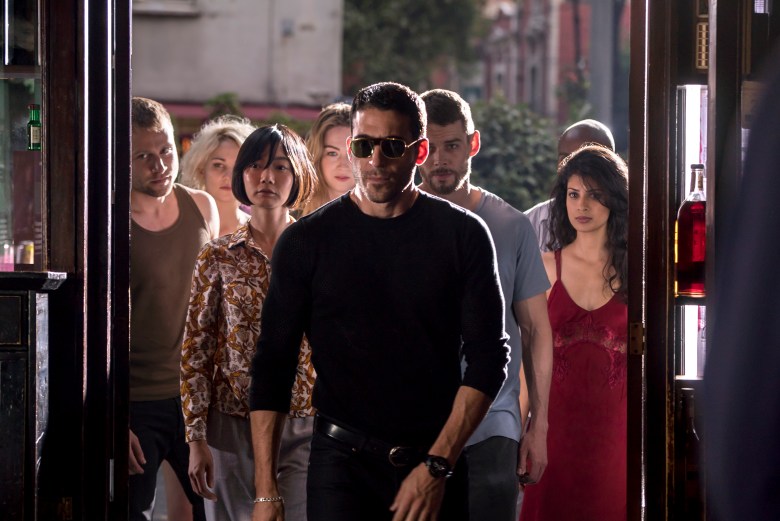 It’s been just over two weeks since fans of Netflix’s most odd, original and heartfelt TV show found out that the streaming giant would not be renewing “Sense8” for a third season. In those two weeks, many petitions have been sent and many protests raised, to the point where Netflix had to release a follow-up statement to fans explaining that it really did try to bring the show back, but “unfortunately we can’t.”

However, they should. They really, really should, at least in the form of a feature-length film, as we first saw suggested by redditor PrivateFrank, but echoing other shows that received a post-cancellation one-off conclusion following their release. Below are the reasons why it makes sense for Netflix to do it — for the fans, for the creators and for Netflix itself.

1. A Feature-Length Finale Wouldn’t Have to Be Quite as Complicated

The production requirements of shooting with a massive cast in multiple countries around the world are almost beyond understanding (executive producer Grant Hill more than had his work cut out for him).

But while a scaled-back “Sense8” finale would likely mean sacrificing many of our favorite locations and supporting characters, thanks to the events of the Season 2 finale nearly all the Sensates are physically together in London. We’d miss the global scale of the series, but plot-wise it would totally makes sense for a feature-length finale to take place in just one or two major locations. Over the course of Season 2, Lana Wachowski was able to handle directing six of 11 episodes, but she did so without her longtime collaborator Lilly, who took a leave of absence from the show that happened to coincide with the decision to come out as transgender. There wasn’t necessarily any sense of something missing from the season as a result, but it somehow seems wrong that Lilly won’t have the opportunity to rejoin this world at all, especially given how personal a journey the show was for all of those involved.

An interesting fact: During an interview conducted prior to the release of Season 1, co-creator J. Michael Straczynski told IndieWire that when he and the Wachowskis were writing the series, the character of Wolfgang (Max Riemelt) was his “true north,” while Lana’s was Nomi (Jamie Clayton). We asked if he could say who Lilly’s was, and he declined to speak for her. We still would love to know the answer.

3. The Plan Was Originally for 5 Years

“We have a five-year arc worked out for this thing. We know what all of the seasons are going to be.” That’s from the above Season 1 interview with Straczynski, and things might have changed dramatically in the years since. But there’s plenty of story left to be told.

4. If Not For the Current Fans, Then the Future Ones

The first two seasons of “Sense8” will live on in the Netflix archives, allowing it to be discovered by new fans for hopefully years to come. But those fans will be more than disappointed by the way Season 2 fails to serve as a proper ending for the series, and may even be caught off guard by it. For “Sense8” to stand the test of time, and remain one of Netflix’s most audacious experiments, a proper ending feels essential. 5. Because Real Talk: The Ending Is a Pretty Cruel Cliffhanger

At the end of Episode 11, “You Want a War?,” one of their own remains captured by BPO, but the Sensates end Season 2 by making a massive play to regain some power — and succeeding. The ensuing chess match between the two sides of this battle, which we now understand far better than before, is a clear set-up for something major.

6. Too Many Unresolved Romances

If we know anything about the Wachowskis, we know that they love a good love story. And while many of the Senseates have found romantic satisfaction, the cruelty of separating Wolfgang and Kala (Tina Desai) just as they were on the verge of finally meeting in real life is pretty brutal. In addition, there are depths to Riley (Tuppence Middleton) and Will’s (Brian J. Smith) bond that are worth developing, especially given the hints we’ve gotten that inter-cluster romances can be awfully problematic. There’s plenty left to explore on this side of the equation. Let’s just put it like this: The true nature of BPO, especially its long history of inhumane cruelty, has been slowly unveiled over the last two seasons. Now that we understand who the dragon is, we deserve to see it slain.

8. And We Deserve a Wedding

At the end of Season 2, Nomi and Amanita (Freema Agyeman) almost simultaneously proposed to each other in one of the series’ sweetest scenes, one that might feel sappy were it not so fully earned by the past two seasons spent with these characters. The only thing that could top that? Actually getting to see them tie the knot. Just imagine it: The film begins with the final battle for the Sensates’ freedom, and ends with a moment of pure triumph for one of the show’s core couples. If the show must end, who could ask for a better ending than that?

Seasons 1 and 2 of “Sense8” are streaming now on Netflix.

This Article is related to: Television and tagged J. Michael Straczynski, Netflix, Sense8, The Wachowskis