How did the visionaries behind last year's surreal Sundance hit get behind an even weirder, 40-minute film from an improv dance troupe?

By Chris O'Falt and Graham Winfrey 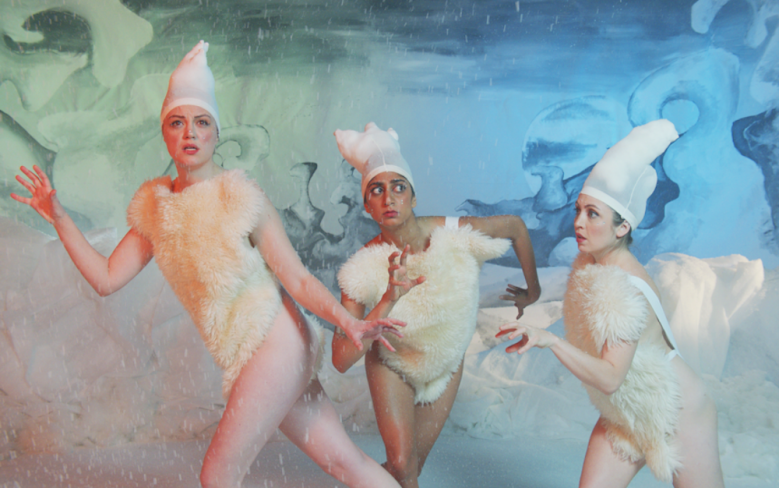 What is “Snowy Bing Bongs?” As with most projects involving “Swiss Army Man” co-directors Dan Kwan and Daniel Scheinert — aka “Daniels” — you kind of have to watch it. Originally performed as a stage play by the dance-comedy trio Cocoon Central Dance Team, the 40-minute film that’s “part psychotropic performance art spectacle, part absurdist sketch show” premieres at Brooklyn’s BAMcinemaFEST. Its path to that point was as unpredictable as the movie itself.

Cocoon Central founders Tallie Medel, Sunita Mani and Eleanore Pienta — aka the Bing Bongs — have been longtime collaborators with the Daniels, dating back to their days at Emerson College in Boston. That was before Kwan and Scheinert made names for themselves as the directors of visually-inventive music videos, which led to their surreal 2016 Sundance breakout.

“Basically, every movie I made in college had one of those girls in it,” said Scheinert. “I was in a comedy troupe with Sunita and then I made a trilogy of short films where Tallie would cry in college. And I made [“Everything a Monster Is Not,”] a big web series with all three of them in it and a couple other friends.”

“Snowy Bing Bong” co-director Alex H. Fischer also went to Emerson with the Daniels and the Cocoon Central Dance Team and loved the insanity of their work. “They were were all in the improv comedy troupe and made these bizarre videos, all of which were shitty except the one Daniel Scheinert made,” said Fischer. “I use to think, ‘man I wish I could just let them do their insane stuff and I could find a way to shoot it well.”

“They’re always sort of taking the idea of dance and body movement and turning it into something really absurd and strange and sometimes grotesque, which you don’t really see often with the female image, especially not it dance,” said Kwan. When Fischer reached out to the directing duo to say he wanted to make a movie version of the Bing Bongs’ performance, the Daniels agreed to help in any way they could, ultimately signing on as executive producers.

The first major challenge for Fischer and co-director Rachel Wolther was figuring out how to adapt the absurdist stage humor to the big screen. “When they walk onto stage, walking out in rugs is instantly hysterical,” said Wolther, of the film’s opening routine, which pairs flatulent sound effects and images of the women sunbathing. “With film, a funny costume doesn’t have that impact, it’s part of the world, so how do you made it funny? Well, you need a closeup of their butts, of course, or a move-in on their belly buttons. The camera or edit can tell a joke.”

The co-directors also built an over-the-top, homemade movie world around the skits. For a sequence called the “face dance” routine, Wolther and Fischer brought in the world of the Hollywood musical and a technicolor palette. Shooting piecemeal over the course of months, the co-directors and stars would gather friends to paint and design sets in the same spirit as their college film projects and the Daniels prolific early short work.

To build out a connective tissue between skits, the co-directors played upon a personal aspect of the three performers’ lives. All three of the women are actively pursuing acting careers for the big and small screen. Each of the characters, in completely over-the-top ways, touches upon reaching for a career as a performer and the idea of celebrity.

“One of the funny things about this piece is that, for the girls, it’s sort of autobiographical even though it seems like it’s just kind of like fearless silliness,” said Scheinert. “What they were really exploring is like just the psychology of what they go through trying to pursue the arts and act. I think they’re able to express themselves in surprisingly articulate ways through really ridiculous caricatures of the business and Hollywood.”

After Wolther and Fischer had tapped out on the resources and favors in New York, the Daniels helped finish the film by pulling together and producing a block of shooting in Los Angeles, which brings home some of the themes of performing in a context of Hollywood.

So why 40 minutes – which is 40 minutes too short of what it takes to be a theatrical feature in 2017 and more than twice as long of what most short film festival programmers are looking for? The original concept was intended to last 30 minutes for television, but according to both the filmmakers and the dance troupe, the running time was really just a product of making something cool. The project was already so absurd that it didn’t fit into the marketplace in any conventional sense.

“When Alex and Rachel said they wanted to make a movie out of it I was really excited by how fearlessly insane of an idea that was, because it’s not some sort of carefully calculated career move on their part,” said Scheinert. “And that seemed to suit the content, where the whole thing from start to finish is just like really talented, beautiful creative people doing something insane just for the art of it. I just want to attach myself to as many things like that as I can.”

This Article is related to: Film and tagged BAMcinemafest, Daniels, Toolkit