Plus, here are some theories on how the dots connect through electrical crackles, coins, and Hawk’s heritage. 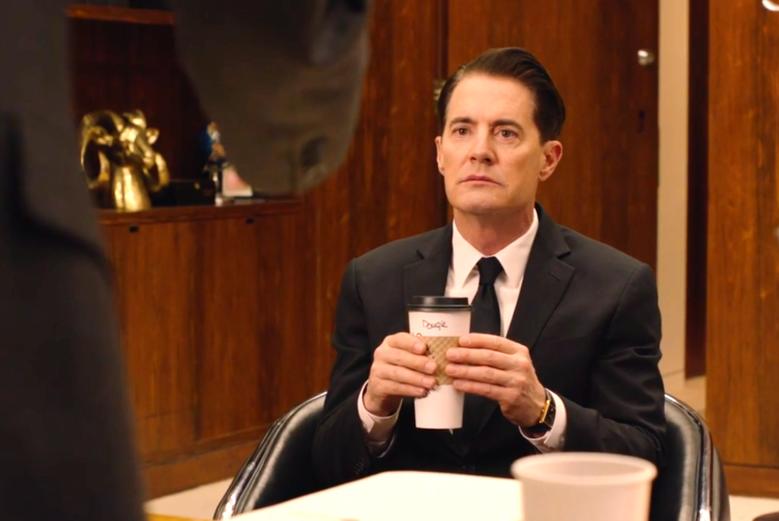 While “Twin Peaks” continues to play the long game when it comes to its various mysteries, Sunday’s episode at least offered a tantalizing carrot to viewers one-third of the way through the season. Fans finally got to see whom Agent Cooper (Kyle MacLachlan) has been speaking to all of these years: The never-before-seen Diane, naturally portrayed by David Lynch favorite Laura Dern.

Diane was Cooper’s secretary from his earliest days in the FBI and the recipient of all of his audio reports and musings. She never appeared on screen, but he confided everything in her. Many speculated long before the show premiered that Dern, who had never been a part of the original “Twin Peaks” cast, would get the plum role of Diane.

The scene, while brief, is satisfying in its details. Albert’s (Miguel Ferrer) important work that evening is to follow up on that promise that he “knows where she drinks,” which is apparently Max Von’s Bar. The peroxide blonde bob is a slight misdirection, since that sleek hairdo doesn’t telegraph Dern’s usual beachy-blonde waves.

READ MORE: Laura Dern Speaks the Truth: An Honest Interview With the Most Scrutinized Actress of 2017

But just as Lynch giveth, he taketh away. The glimpse is fleeting. Diane clearly knows Albert after addressing him by name, but beyond that, we only know that she’s rather stylish, smokes and drinks martinis. Answers about how she will help with Cooper or any Blue Rose cases will have to wait. And wait we will through 12 more episodes if necessary. The timing and the brevity confirm just how deliberate all of these revelations and dribbles of information are. It is a bright moment in an episode that continues to unspool its disparate storylines but this time, actually makes a few more connections without any hugely surreal or inexplicable moments.

The season has stretched out its “getting to know” Cooper phase throughout the episodes in tandem as he is finding himself, instead dumping it at the beginning of the series. Thanks to a combination of coffee and MIKE, aka the Man with One Arm (Al Strobel), who pleads with Cooper to “Wake up. Don’t die,” Cooper continues to become more lucid.

As in the casino, Cooper has visions that lead him, but this time it’s in the case files given to him by Lucky 7 Insurance to review. There is method to this Dougie madness as he doodles ladders and staircases and lines connecting names in the files. His boss Bushnell Mullins (Don Murray) seems to make sense of it and asks him to “keep this information to yourself” for now.

Again, the show’s credits give the best clues as to what’s happening since Tom Sizemore’s character Anthony Sinclair wasn’t seen in the episode much, but he was peering out of his office when Cooper got called in to see Mullins. Anthony Sinclair’s name is also seen as a signature on an insurance claim. Could we say fraud? And didn’t Cooper say, “He’s lying” about Sinclair before? This is a situation though, in which the answers may not be that important except as a means to an end. Only the events of the show will be able to confirm whether or not corruption means anything, but what it important is that whatever the powers that be are up to, they’ve been active. In a scene right before Cooper has his vision in front of the case files, we see a street light change and hear that familiar electrical crackle (that we heard in the glass box room and other places before) that coincides with or precedes an important event.

Unfortunately, whatever the power of that crackle is, it’s not just a force for good, which makes sense since there is a White Lodge and Black Lodge, good and evil. Over in Twin Peaks, the second time we hear that buzz is right after that dastardly Richard Horne (Eamon Farren) is the perpetrator of a horrifying hit and run. As the distraught mother cradles her dead son’s body, our attention gets called upwards to a telephone pole and that familiar crackle. Is this how garmonbozia travels and then somehow gets spit out elsewhere as creamed corn?

Richard’s actions confirm that he’s as bad as his first impression led us to believe, but the episode reveals that he’s small fry, a mere pawn. Mr. Finger Guns himself, Red (Balthazar Getty) is calling the shots in what sounds like an illegal drug deal. Red also acts oddly… as if he’s new to his body or can’t control it as well as he does dimes. Bits of metal may have some significance this season. That he seemed to know Shelly (Madchen Amick) in the second episode in the Bang Bang Bar could be cause for concern. One more note about bad guys in Twin Peaks. Richard had bribed Deputy Chad Broxford (John Pirruccello) who was in plain clothes in the previous episode at the Bang Bang Bar, and Chad continues to appear without conscience, kindness or empathy after a scene in which he mocks the suicide of Sherriff’s son as a result of PTSD.

Even before Cooper was reborn via electrical socket and took over Dougie’s life, people were out to kill Dougie, not Cooper. While we await answers on the why, the episode did start to offer a few answers and connections. For one, the people whom Janey-E was so concerned about owing money are merely small-time. They don’t appear to have any more sinister or supernatural evil powers that would connect them with the Black Lodge.

Unfortunately, those who want Dougie dead do have a connection with things or people disappearing into thin air and turning into bits of metal. A hitman that the credits helpfully lists as Ike “The Spike” Stadtler (Christopher Zajac-Denek) takes out Lorraine (Tammie Baird), whom was stressed out in the previous episode after finding out Dougie was still alive and asked her lackeys, “Are you trying to get me killed?” What a sad premonition that turned out to be. This is where a second connection comes in. The nervous Las Vegas exec Duncan Todd (Patrick Fischler) who unhappily follows an unidentified boss’ orders (perhaps the same person as Lorraine’s boss), sees a message pop up as a red square on his computer, which prompts him to retrieve a mysterious envelope marked with a dot from a locked safe. We soon find out that this envelope contains the photos of Lorraine and Dougie. We’ve seen Lorraine’s excruciating fate (really? more women’s violence?) at the hands of The Spike, and it seems that only a bent spike may delay his targeting Cooper in Dougie guise in the near future.

Continue to the next page for Heads, Hawk Wins and more>>

Page 1 of 2
Continue Reading: ‘Twin Peaks’ Review: The Person Everybody Has Been Waiting to See for Over 25 Years Doesn’t Disappoint