Audiences got the showdown that was promised, but these character meetings mean nothing if they only rehash the past. 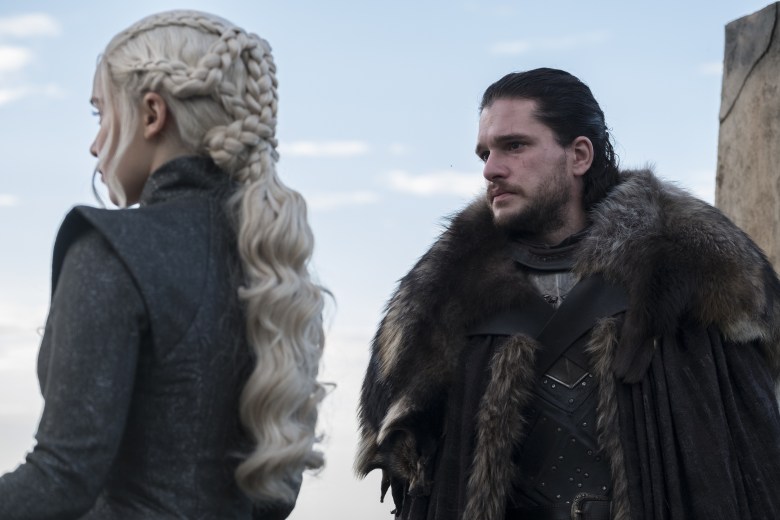 It’s no surprise that David Benioff and D.B. Weiss are listed as the writers on “The Queen’s Justice,” Sunday night’s episode of “Game of Thrones.” Much has been made about the changing of the guard in the series’ authorship as the show has outdistanced the source material. Without the shorthand of the book to fill in the knowledge gaps (both in actions and emotions), “Game of Thrones” is now fully feeling the weight of its lengthy character list. There’s no helpful appendix to clarify what role specific individuals are playing in the war to come. It has to be rehashed and diagrammed on atrium floors and on carved tabletops until it’s firmly established where everyone stands.

In an episode filled with strategic positioning, for Jon Snow that place is in the hall at Dragonstone, in the presence of a queen he’s hesitant to acknowledge. This meeting of totemic “Game of Thrones” characters held promise for book readers for ages, but their eventual meeting proves that the show is still fighting a war of words, while the eventual end goal has been seemingly fixed for quite some time.

As Daenerys and Jon bicker over which of them deserve the other’s allegiance, their reasons for doing so set the tone for what colors most of “The Queen’s Justice.” (Even as simplistic as this meeting became, Emilia Clarke listing off Dany’s past tribulations and accomplishments is some of the best work she’s ever done. As fraught as Dany’s military ventures have been of late, she’s certainly learned how to command a room.) “Game of Thrones” has always woven powerful verbal spats into the fabric of its drama, but as all of its major players begin to hurdle toward a final showdown, there’s a trend we see in these conversations descending into recapping what the audience already knows. These far-flung characters need time to understand what each other understands, and it’s made for a repetitive Season 7 so far.

Fortunately, this emphasis on pointed verbal confrontation does leave room for some humor. The stark contrast between Missandei’s lengthy introduction of Dany and Davos’ simple reply in kind shows how differently these two sides are approaching their impending alliance. Tyrion explaining that he’s ”unsure about the nomenclature” when making the case for a partnership formed on zombie-killing obsidian is also another nice Peter Dinklage touch.

But even that joke rings hollow in light of the emphasis that the show has placed on these discussions. Actions matter more than ever in this world. Claiming a right as a king is among the realm’s greatest crimes, and semantic arguments continue to crowd out the idea that there are larger forces at work. While figures of power take their time deciding who gives orders, the enemy is always regrouping out of sight. And it’s not just a problem that extends to the series’ most beloved characters. Euron was painted as a lecherous troll the second he walked into the hall of the Iron Throne in the Season 7 premiere, so the “finger in the bum” line to Jaime feels particularly reductive, even if Nikolai Coster-Waldau continues to be the king of reactions. Ditto Euron’s entrance into King’s Landing, where his needling of Yara is simply a recap of what transpired at the end of “Stormborn.” His description of the citizens cheering his arrival is less engaging than seeing the streets lined with raucous well-wishers.

This problem also spills over to Ellaria’s fate. All that audiences need to understand Ellaria’s terror is the look on her face as she sees the reanimated Robert Clegane standing at Cersei’s side.  Shackled in a dungeon, her torture is meted out by Cersei inflicting the same poison-lip punishment on Tyene that was afforded to Myrcella upon leaving Dorne. As mother and daughter lunge for each other in an attempt to free each other, the emotional impact of that death sentence is deadened by Cersei’s preamble, a “The Mountain and the Viper” plot summary. What may read on the pages of a script like a poetic, circular twist of fate to underline Cersei’s ruthlessness ends up feeling like an obligatory exercise of connecting the episode itself back to the “Previously On” opening.

Littlefinger’s tiny pep talk to Sansa, to “fight everywhere,” loses its potency because the episode already gives a handful of other characters their own advice-filled monologues. In fact, tossing aside the interpersonal plot recap is what made the reveal of Bran arriving at Winterfell a far more dramatically satisfying reunion. It relied on Sansa’s face, followed by the recognition of how much her brother had been changed by their time apart.

Luckily, as the show incorporates the more visual storytelling elements, these important discussions of characters’ fates aren’t happening in a vacuum. They’re set against gorgeous cliffsides, under the shade of tree with leaves like brood droplets. Jon and Tyrion even share a Sorkin-esque walk-and-talk before getting interrupted by a dragon swooping just overhead.

But it doesn’t matter where these conversations happen if their very repetitions underline that at this point, talking is pointless. All the best laid plans of Targaryens and Snows are once again laid waste by an agent of chaos. Only this time, it’s not the boisterous Euron, but the cunning Olenna Tyrell, once again proving how she’s managed to survive this long. Not only does she get to go out on her own terms, she gets to deliver yet another Westerosi refresher course: She’s the one who poisoned King Joffrey.

If the only value of these extensive, exhaustive planning meetings and returns to the recent past is to set up some grand Casterly Rock misdirection, to underscore just how ahead of the game the Lannisters are, that’s an awful lot of screen time to devote to an idea that was hammered home in “Stormborn.” Family histories are being forsaken at every turn. All that’s driving these rival factions is what they can trust in front of their own two eyes. (It’s fueled Sam’s efforts at The Citadel too, who takes the visual cue of Jorah’s lack of infection as good-enough reason to risk a massive epidemic for a handshake.)

At every turn, “The Queen’s Justice” breaks the ancient exhortation to “show, not tell.” As the season nears its halfway point, the stage is set for a series of showdowns, but with the exception of a Greyjoy here and a Tyrell there, the board still remains largely as it was when Dany asked “Shall we begin?” As a means for laying the historical groundwork for an ongoing, world-ending struggle, that’s not unforgivable. But as an episode-to-episode experience, it’s starting to make for a show that’s circling in on itself.