The "Game of Thrones" Comic-Con panel covered everything from a smackdown with "Star Wars" fans to a wish that Jon Snow never died. 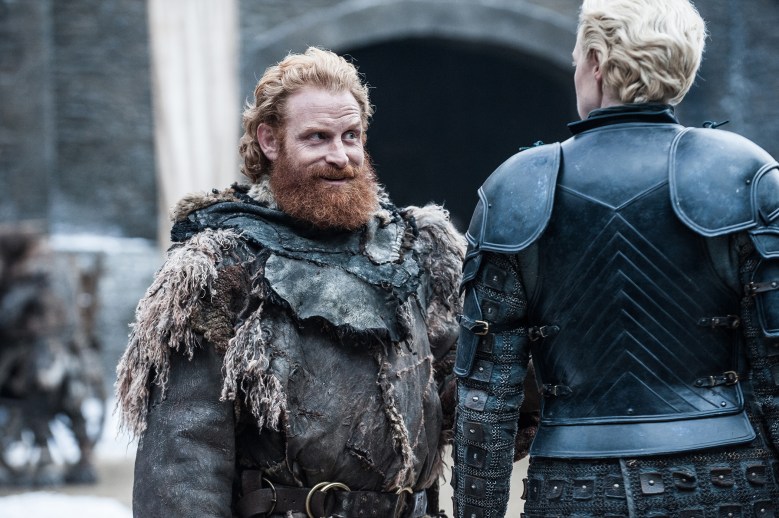 With one episode of Season 7 already out, the “Game of Thrones” Comic-Con panel was bound to be a close-lipped affair. Twelve episodes remain overall, and no one is eager to have any of the few remaining moments spoiled.

But the group in San Diego — including Isaac Hempstead Wright, John Bradley, Natalie Emmanuel, Liam Cunningham, Sophie Turner, Jacob Anderson, Conleth Hill, Alfie Allen, and Gwendoline Christie — had to say something during their hour in Hall H, and Kristian “Hodor” Naim’s moderation did draw out a few choice secrets. Here’s what we learned about Season 7, the final year, and more:

It took just one photo for the “Game of Thrones” fandom to find their new favorite couple in Westeros, and the first question of the panel was whether or not Brienne (Gwendoline Christie) appreciates the “creepy” affections of Tormund (Kristofer Hivju).

“I don’t think at the foremost of her consciousness is a value system based on how men appreciate her, but I mean, who doesn’t like being appreciated as both, really?” Christie said. “I don’t think that’s what she’s invested in at all. I think she’s finding it awkward.”

But Christie went on to say she thinks Brienne does harbor a “secret enjoyment” of his peculiar advances.

“I’ve always held a candle for that,” Christie said.

But There’s Another Hot Couple in Town

Shortly after everyone tried to set up Brienne, Anderson was asked if there were any sparks between Grey Worm and Missandei.

“I think there’s already things firing between them,” Anderson said. “There’s chemistry, right? I want those kids to be happy. I want them to find happiness with each other. Everything’s so sad!”

“Do you think Daenerys would approve?” Naim said.

Alfie Allen Brought an Adorable Puppy with Him Because Why Not? Naim was curious if Turner thought Sansa was being manipulated by Littlefinger (Aiden Gillen) this season. The simple answer: No. The longer answer: “As Sansa has grown and been a prison by all these master manipulators, she’s been silently learning and adapting at manipulating,” she said.

“At this point, she’s just as good at playing the game as he is,” Turner said.

In a similar regard, Turner said Sansa constantly has her guard up, no matter who she’s working with.

“She trusts no one — family member or not — and I think that’s important when you play the game of thrones,” Turner said.

The last question posed directly to Christie had to do with her upcoming role in the new “Star Wars” film, “The Last Jedi.” A fan wanted to know which fan base was “crazier,” and Christie gave a thoughtful answer.

“It’s not really a craziness, but the level of passion is pretty much equal,” she said. “What is noticeable is that ‘Star Wars’ is something many of us grew up with, which gives many of us a sense of hope. That’s how I feel: like I came home. With ‘Game of Thrones,’ we’re going into Season 7 now, and there’s a similar feeling. I hope that ‘Game of Thrones’ lives on so people have that same feeling of home and love for it.”

That being said, Christie is also “desperate” to star in a musical.

“But can you sing?” Naim asked.

“The jury is out on that small aspect of doing a musical,” Christie said. “But I’ve heard they can do all sorts of things with technology these days.” “That women can be knights!” Christie said, to a warm round of applause.

“Free puppies for everyone,” Anderson said. “And unicorns should be created.”

“The first thing that comes to mind is unlimited carbohydrates,” Turner said.

“Maesters have to clean out their own stinking messes,” Bradley said, referencing a certain montage from the Season 7 premiere.

The actor who plays Snow’s loyal friend and helper was asked if he could bring one character back to life, who it would be, and his response was two-fold:

“The legitimate answer is Rob Stark,” Bradley said. “But if there’s one character I wished they hadn’t killed it would be Jon Snow, if only so it would have saved us from having to talk about him every five minutes for a year.”

Naim agreed, recalling how after being asked one too many times if Jon Snow was coming back that he snapped and said, “I don’t care.”

“The next day in the paper it said Kristian Naim hates Kit Harington,” Naim said. “That’s not true. I never said that.”

Meanwhile, Sophie Turner’s response to the same question was met with boos and groans from the crowd.

“I just really loved working with Jack Gleason so much that I have to say Joffrey,” she said.

It’s safe to say Turner is the only one who misses Joffrey.

This Article is related to: Television and tagged Comic-Con, Game of Thrones, Gwendoline Christie