Andrea Savage's new TruTV series is so much more than the average showbiz cringe comedy. 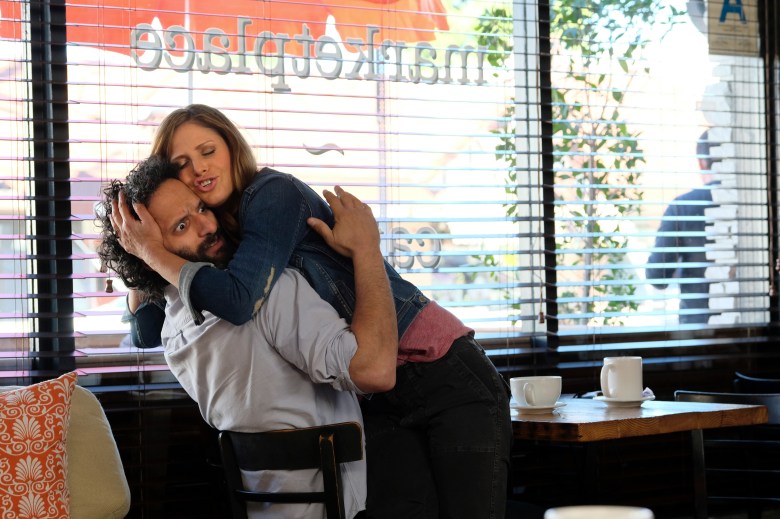 Andrea and Mike aren’t perfect parents, but they’re trying. Maybe a little too hard at times. Such is the joy of “I’m Sorry,” the new TruTV series from writer/producer Andrea Savage, who stars as a dramatized version of herself, navigating life in LA as a working comedian.

“I’m Sorry” follows Andrea on the everyday journey through a very specific LA parenting world. With husband Mike (Tom Everett Scott) and a preschool-aged daughter Amelia (Olive Petrucci), Andrea navigates a world where preschool birthday parties can occasionally dovetail with unexpected conversations about the careers of adult film stars. Andrea the character is a comedy writer, and her penchant for joking her way out of awkward situations frequently catches the disapproving eyes of fellow parents.

A comedy about the life of a comedian isn’t unprecedented, but Andrea’s profession adds an interesting wrinkle to a character whose instincts can often get her into trouble. Each episode is a new step for her trying to establish a boundary between her writing, social and parental lives. “I’m Sorry” is funniest when it allows (and in some cases, forces) her to blur those divides, even if there are consequences.

Those consequences often come from the fact that even when the conversations can seem light and innocent on the surface, “I’m Sorry” doesn’t shy away from getting filthy. Just as easily as the show can give a thoughtful consideration to keeping romance alive in a older marriage or the proper way to encourage a single parent to find their own happiness, the show also gets into detailed, well-intentioned gossip about fetishes and bodily functions, usually over a dining room poker table.

Sometimes, when comedies rely on showing people being baffled by the behavior of their peers, the joke is usually on the person being talked about. Savage, along with Scott, show a refreshing willingness to let the laughs come from them trying to work out why something unfamiliar makes them react a certain way. The result is a comedy that succeeds by not placing blame or pointing fingers. “I’m Sorry” also benefits from not using Andrea and Mike’s marriage as a crutch. Though the couple does get a significant amount of attention, the show’s early episodes have found a way to build out their extended inner circle in a short amount of time. Between two parents, a writing partner, a preschool teacher, and the other adults at drop-off, the show has found a way to integrate them into the story so that Andrea and Mike aren’t alone on Parenting Island with only each other to keep themselves amused.

Even if the show was just the two of them, there’d still be plenty to work with. With Scott’s reserved, observant approach as the straight man to Savage’s more outspoken, boundary-pushing riffing, Mike and Andrea have a sweet, banter-based chemistry that’s far more than manufactured affection.

That free but elevated back-and-forth style of conversation extends to the show’s guest stars, ranging from a playfully ornery June Squibb to the always reliable Jason Mantzoukas as Andrea’s writing partner Kevin. Gary Anthony Williams plays Andrea’s friend/occasional consultant Brian with a delightful matter-of-factness and Judy Greer as Maureen, the school’s biggest vicarious gossip fiend, is a welcome addition too.

It’s hard to make a TV show without a villain, but here the biggest opposition is Andrea’s faulty filter. Her tendency to step one foot over the line and then spend five minutes trying to walk it back is the source of much of the show’s laughs. Occasionally, getting Mike and some of the other school parents in the inappropriate comment mix is a nice change to the formula, but the more ways the show finds for her to make people uncomfortable, the better.

READ MORE: 7 New Shows You May Have Missed That Are Worth Revisiting

“I’m Sorry” definitely draws on some of the hallmarks of the well-established genre of industry-adjacent metacomedies. It’s only vaguely serialized and it draws on an impressive roster of comedy guest stars to capture a friendly, backstage vibe on screen. But what comes through here is that this is Savage’s own voice. For the most part, the tricky situations that Andrea has to work her way out of aren’t contrived or punched up to match another comedian’s writing style. All of it is underlined with a real sense of love for family and friends.

It’s that overriding center that distinguishes the show from other workplace or family comedies. There is an instant sense of camaraderie built in 3 a.m. phone calls and delicate discussions between parents about the unexpected behavior of their child. In this early batch of episodes, even when everyone on screen glances at one another through gritted teeth, there’s an underlying sense of comfort in “I’m Sorry” that somehow puts the audience at ease.