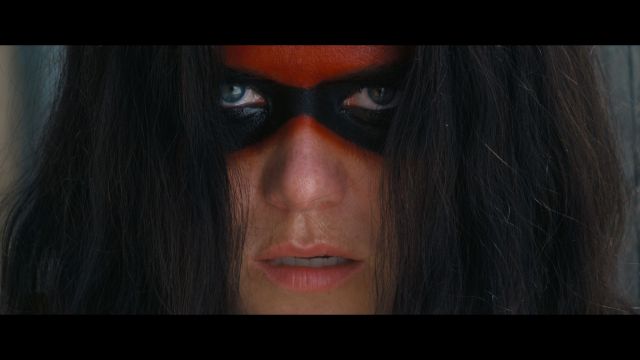 The depiction of Native Americans in the movies is notorious for its reductive stereotypes. By those standards, “Mohawk,” a bloody, low-budget survival saga about members of a flailing tribe facing off against brutish American soldiers during the war of 1812, arrives like a revelation. The sophomore feature from Ted Geoghegan is a far cry from the haunted house tropes of his debut, “We Are Still Here,” but it explores a much more realistic horror — the struggle to survive against ruthless persecution, even as the future looks grim.

It’s a fast-paced action-thriller that, while rough around the edges, delivers a wild ride — and an implicit rebuke to the limitations of Hollywood storytelling.

The movie, which premiered at the 2017 Fantasia International Film Festival, revolves around the plight of Oak (Kaniehtiio Horn), a young member of the Mohawk tribe in upstate New York, and the two men with whom she enjoys a polyamorous relationship: Calvin Two Rivers (Justin Rain) and Joshua (Eamon Farren), a British agent sent to warn the natives about approaching American troops looking to steal the Mohawks’ land. While the tribe remained neutral during the war, that didn’t stop troops from ruthlessly plundering native tribes. “Mohawk” takes place exclusively within the confines of a dense forest, as a group of militia led by the bloodthirsty Hezekiah (Ezra Buzzington) attempt to murder the local trio in an increasingly tense game of cat and mouse.

Needless to say, the protagonists of “Mohawk” are a far cry from “The Revenant” and other movies about the American frontier in which the natives wind up as bit players alongside white heroes. In Geoghegan’s unsettling vision, the Americans are pure evil, power-hungry imperialistic monstrosities not all that different from the deranged rapists in Wes Craven’s “The Last House on the Left,” while Oak emerges as a fierce warrior intent on salving some modicum of hope for her tribe.

At the film’s premiere, Geoghegan said he was looking to do “a complete 180” after “We Are Still Here.” When he shared the title for “Mohawk” to a peer, “He was like, ‘Is it about mohawk people or punk rock?’ I said, ‘It’s kind of both. It’s a Mohawk war that’s fucking punk rock.'”

The movie bears some comparison to other recent minimalist period pieces that embraced their cheap budgets, including “The Keeping Room” and “Men Go to Battle.” But while those movies mostly focus on white characters, “Mohawk” goes the opposite route.

Geoghegan was keen on casting real Mohawk actors, which initially proved to be a challenge. “We got this terrifyingly small list of Native American actors in America,” Geoghegan said. “It saddened me so much to see how few people were being represented by talent agencies in the US and Canada.” But he managed to score one of the most prominent Mohawk performers for his lead.
The Canadian-based Horn is a veteran performer who was nominated for a Gemini Award in the TV movie “Moccasin Flats: Redemption,” and she has landed bit parts in projects ranging from Netflix’s “Helmlock Grove” to Amazon’s “The Man in the High Castle.” On the set, Horn advised the crew on historical accuracy and helped integrate some Mohawk dialogue. “I tried to use all the resources I had to make sure everything in my power that everything was correct,” she said. Rain, who plays Oak’s Mohawk partner, came to the filmmaker through a blind submission. While he recently scored a role as a series regular on “Fear the Walking Dead,” he has also endured his share of stereotypical casting, including the part of “Quileute Warrior” in “The Twilight Saga: Eclipse” (“I was hoping that wouldn’t come up,” he said when an audience member referenced it in the Q&A.) The filmmaker also reached out WWE to cast one of the key American roles, the hulking, bearded Lachlan. That fell to Jonathan Huber — aka Luke Harper — who makes his films debut in the role. “We looked at him and we said, ‘He looks like he’s from the mountains,'” Geoghegan said. Lachlan lived in Rochester, about 20 minutes from the remote shoot.

The production, which was financed entirely by the genre company Dark Sky, lasted a mere 20 days, with temperature skyrocketing to 105 degrees during the day and plummeting to 32 degrees at night. “The sweat would freeze on our faces,” Geoghegan said. But the disagreeable circumstances fit the intent of the story. “We wanted to make a film about people who have had really tough lives and they don’t ever stop fighting,” he said. “I hope it made people feel uncomfortable, weird and jarring, because that’s the message we wanted to get across. Sometimes life is like that.”

Geoghegan, who co-wrote the screenplay with horror novelist Grady Hendrix, acknowledged that he had some distance from the material — but it still had a personal edge. “The biggest point we wanted to drive home was our respect for the relentless, undying courage of the indigenous people of North America and how we don’t see enough of that in film,” he said. “That’s coming from a guy who’s white as can be.”

This story continues on the next page.