The Academy Award-winner opens up about updating an iconic role, why diversity in film is so important, and what Aunt May does for a living. 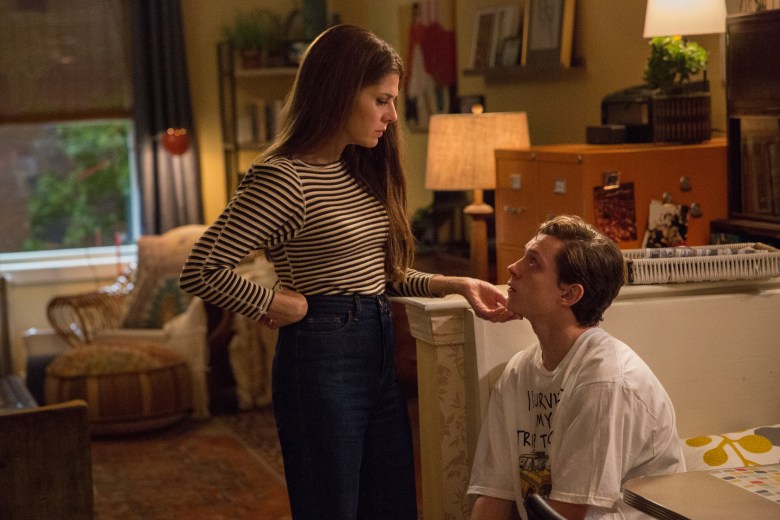 “Spider-Man: Homecoming” has been earning rave review from critics and fans alike, stealing the top spot at the box office on its opening weekend, and raking in over $154 million during its first week in theaters. No one has really captured both sides of Peter Parker’s personality quite as succinctly as Tom Holland, who plays the character like a plucky Queens kid that just feels right. But the new movie contains another notable character shift: Aunt May, now played by Marisa Tomei.

This wasn’t the Aunt May fans might remember from the comics — a sweet old woman keen on cooking and housekeeping, her collar buttoned high, her silver hair pulled back into a matronly chignon. With her very first appearance on screen (in a fleeting moment from “Captain America: Civil War”), Tomei establishes that her version of Aunt May hails from a different character type altogether: Here was a younger single woman, thrust into unexpected circumstances in life as the guardian to her orphaned nephew.

Needless, this isn’t the sort of movie that Tomei is accustomed to appearing in. In recent years, the actress received two Oscar nominations, for “In the Bedroom” and “The Wrestler,” and won one back in 1992 for “My Cousin Vinny.” It’s not unusual to see Tomei on the big screen, on television or even on the Broadway stage, but taking on a role in a Marvel blockbuster is still new territory. At the same time, it’s a sign of an actress who continues to push the boundaries of her career, circumventing Hollywood’s track record of ageism, and never allowing her extraordinary talent to be limited to only one type of project.

A lot of work went into updating Aunt May, but in an interview with IndieWire, Tomei admitted she was unfamiliar with the comic book version of her character. “My agent proposed this role to me, and they kept saying, ‘She’s the sexy version.’ And I was like why are they trying to do this? Do they think it’s buttering me up? It’s making me really uncomfortable.” Then she researched the character, and her opinion changed. “They were probably trying to counteract any fear I had about taking on such an ancient woman,” she said. “And of course, I was enchanted by her high Victorian collar and her parasol.” Tomei put a lot of work into building the character and updating her to a modern, 21st century woman. Hints of Gloria Steinem can be found in Aunt May’s love of high-waisted pants and her flowing brunette locks. “I wanted to fulfill the task that I was asked to do, which was bring a sensuality to a care-taking role, but yet I have all these scenes with my nephew,” she said. “It’s not like I’m going to be sensual with him, so how do I really do this?”

One of the ways was through wardrobe. “We spent a lot of time really thinking about giving her a new iconic look,” she said. “All of the other superheroes have their own iconic shapes, very clean lines, something you can identify, and so my costumes have very clean lines and primary colors; they’re casual enough.”

It’s clear Aunt May provides support for Peter at home, but that doesn’t make her a homemaker. “That was the main switch that Marvel brought to the table was caring about him, being the deep seed of home for him but wanting him to experience the world and not wanting to keep him in the house. The other thing that they brought to the table was she should be out and have her own job and be a person in the world.”

But while Tomei brought a deeper understanding of who Aunt May really is apart from Peter, the character was still subject to a slew of jokes and comments about her appearance. In “Captain America: Civil War,” Tony Stark is blown away by just how attractive Aunt May is, and there’s an flirtatious electricity between the two character made all the more fun thanks to the history between Tomei and Downey, Jr., who were a real-life couple in the early ’90s and starred together in 1994’s romantic comedy “Only You.” At the time of the film’s release, there was plenty of conversation.

Tomei shrugged off those remarks. “The other great Mae, Mae West, said ‘I’d rather be looked over, than overlooked,'” she said. “But at the same time, it can’t be the beginning and the end with ‘hot person.’ It has a little bit of a sour taste after a while, it’s still reductive to what a woman is or even potentially what a superhero is, unless her super power is being super fucking hot everywhere, which we could capitalize on.” She’s keen on seeing Marvel give her more to do with the character in future films. “Why not take this character and have her participate in the ‘action,’ and what would that be for her values to come into play?” she asked. “That’s her anchoring iconography, the values in the home, so how do you bring that into action? I think that it would be wonderful to have her involved a lot more in active things and not only dropping him off at school or picking him up or being at home.”

There was one key scene with Tomei that didn’t make the cut, in which she’s seen as a community leader during the fallout from a disaster in the neighborhood. “Peter sees me save somebody, but I don’t tell him that I did,” she said. “There was a community disaster because the world we’re living in is dystopian and there’s all this stuff that’s happened that horrible and he’s trying to correct it, but he sees me save a little child from harm but I don’t tell him. So we both wind up having our own secrets, and I thought that was quite interesting.”

In other words, there’s a lot more to the character than “Spider-Man: Homecoming” lets on. So how about a standalone Aunt May film? Tomei laughed off the idea. “Only if the fans demand it,” she said. “I don’t know if that’s happening anytime soon.”

In the meantime, she has plenty to keep her busy, including a recurring stint on “Empire” and a lead role in Joshua Leonard’s upcoming “Behold My Heart.” She’s currently looking for a more regular TV gig, and she’s also actively involved in the theater scene (she recently starred in Lincoln Center’s “How to Transcend a Happy Marriage”). She also has her eye on the prospects of playing urban activist Jane Jacobs, having provided voiceover work for a Jacobs documentary that was released last year. But perhaps most relevant to the conversations swirling around Aunt May is her interest in doing a film about the women’s movement. “It’s well-known that I like Gloria Steinem,” she said. “But I run the gamut. I like my romanic comedies, and I like the deep, heart-wrenching even political things as well, so I’m looking for my next thing.”