The upcoming CBS All Access series is pushing a message that echoes the original series' fundamental values. (And also, there will be tribbles.) 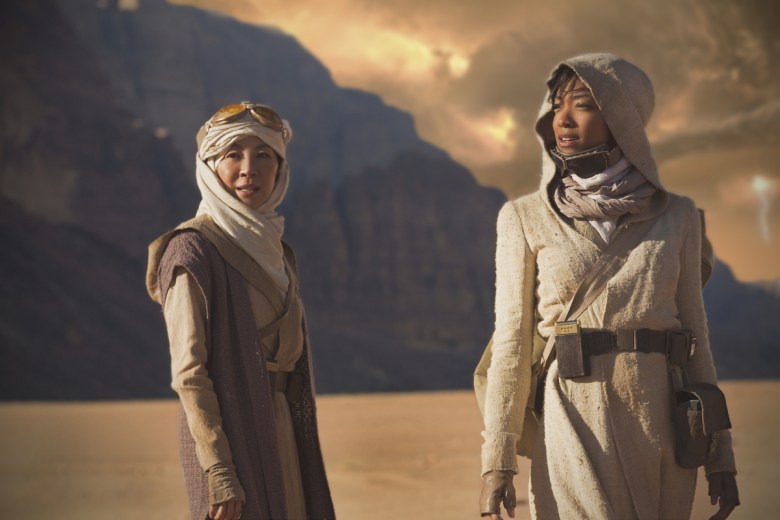 The cast and producers of “Star Trek: Discovery” have no patience for the backlash they’ve been getting online over the show’s commitment to depicting the universe as a wide and varied place.

“‘Star Trek’ has always been pictorial of diversity and inclusion and universality,” star Sonequa Martin-Green said Saturday, July 22 during the “Discovery” panel presentation at Comic-Con. “It’s one of the main reasons it’s so important to so many people to this day. So if you say you love the legacy of ‘Star Trek’ but you don’t love that, you’ve missed [the point].”

“It was confusing to me, the amount of backlash we got, because if you love science fiction, you love the idea of imagining yourself as other,” executive producer Akiva Goldsman said. “‘Star Trek’ is about empathy — its primary ground is that we are the same and we accept each others’ differences and find common ground. It spoke culturally more to what’s happening online these days than what’s happening with ‘Star Trek.'”

Added Martin-Green, “I encourage you to join with us, come on the journey with us. Learn about the people around you.”

Over the course of the afternoon, the producers reaffirmed that their mission goes beyond creating diversity. “Diversity has become too easy a word,” Goldsman said during a press conference following the panel. “We’re committed to complexity, the differences in cultures and differences in biology and preference and inclusion — these are the principles upon which ‘Star Trek’ was founded upon. So we chase those, we chase the idea that our arms are as wide as arms can be. This show’s mission is to be inclusive, so we’re very very purposeful about that and you’ll see as we move forward that that’s no means an accident.” Beyond the fact that “Fargo” composer Jeff Russo was taking on the music for the series, the biggest news to emerge was that Lt. Stamets, played by Anthony Rapp, would not only be the first openly gay character to appear in a “Star Trek” series, but he was getting a boyfriend, played by Wilson Cruz (“My So-Called Life”), who will also be an officer on the ship.

There were some intriguing plot details revealed, especially regarding the background of Martin-Green’s character, Lt. Commander Michael Burnham. We noted after watching the first trailer released in May that she seemed to have a unique relationship with the character of Sarek (Spock’s father, played in “Discovery” by James Frain), and it was revealed by Martin-Green that Burnham was actually raised by Sarak and his wife Amanda Grayson on Vulcan, attending the Vulcan Science Academy despite her human status.

After that reveal, Kurtzman noted that “brains are exploding that Spock has a full human sibling we never knew,” but asked that the audience be patient and wait to learn more.

One thing fans don’t have to wait to learn: there will be at least one tribble, as confirmed by Kurtzman during the press conference. It was also reaffirmed that the series will eschew mission-of-the-week stories, instead telling one serialized tale over the 15 episodes of the first season, with both plot and character arcs continuing week to week.

In general, the awe in which both producers and cast held “Trek” proved emotional more than once, as actors remembered their reactions to interacting with the world of the show: “The first time I was handed a phaser, my head exploded,” Rapp said. But it was the message of “Trek,” not the props, that held real value for them. Martin-Green choked up during the press conference when discussing what being a part of the show meant to her. “I don’t know if I can put it into words — I think if I try, I’ll cry,” she said. “But it’s such a privilege to be a part of a story that I truly believe is going to bring people together.”

Added Martin-Green, “We don’t have to let go of who we are to learn who you are. It’s touched on here in such a unique way that honors the legacy and carries it to a next level. We do it so boldly, but it’s also so seamless which makes it organic. Normalcy becomes a form of activism, just by being and not being afraid of it.”

Which is to say, “Discovery” will celebrate inclusion by treating the concept of being inclusive as a natural and obvious one. “Roddenberry’s greatest contribution to race relations is that he never addressed it,” Kurtzman said. “And that’s exactly what we’re planning on doing.”

This proves especially powerful, given that “Discovery” chronicles a not-so-peaceful period of time in Federation history. “We live in very troubled times and every day we look at the news and it’s hard to see what we see. I think that now, more than ever, ‘Trek’ is needed as a reminder of what we can be, the best that we can be,” Kurtzman said. “‘Star Trek’ has always been a mirror to the time period it reflected and right now the question of how do you preserve and protect the idea of what ‘Star Trek’ is, in the wake of a challenge like war and the things that must be done in war. It’s a very interesting and dramatic problem, and feels like a very topical one given the world in which we’re living.”

“But again, the optimism is the thing we must hold onto like a torch,” he said. “For Roddenberry’s vision, and for ‘Trek.'”

The first episode of “Star Trek: Discovery” premieres September 24, 2017 on CBS. The season will subsequently run on CBS All Access.