Monsters aren't the only antagonists in "Stranger Things" Season 2. 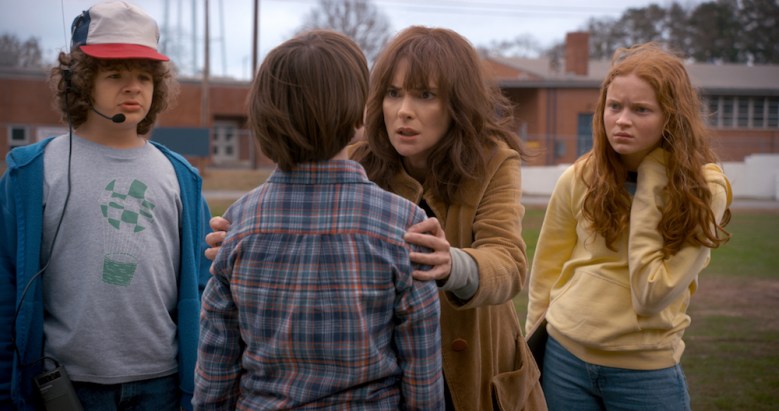 The highlight of the “Stranger Things” Comic-Con panel was the Season 2 trailer, and not just for the fans. Everyone on stage, from moderator Patton Oswalt to new cast member Paul Reiser, were visibly shaken by the wild first look at the new season.

Their reaction combined with how little they were allowed to say only added to the mystery surrounding the upcoming episodes. Oswalt repeatedly chastised himself for asking questions that were too spoiler-centric, but a few telling answers were given, especially about the new cast and character arcs for Season 2.

Oswalt addressed the romance he and Harbour had struck up on Twitter and asked if there would be more shirtles scenes in Season 2.

“Hopper gets to do some really thrilling sexy scenes in Season 2, so enjoy kids,” Harbour said, laughing.

But he did share some actual details on where Sheriff Hopper was headed.

“In Season 2, it’s a year later and you can’t do the same thing,” Harbour said, citing a scene where Hopper’s act of heroism reverses his downward emotional trajectory and makes him into the hero of the story. “He starts off as such a jerk […] but by Episode 4, it’s like, ‘If he dies, I’m suing Netflix.'”

“[But] there is a psychology of a heroic action where someone does something heroic [and wonders] whether they can live up to that in their daily life,” Harbour said, noting Season 2 will examine “the pitfalls” of Hopper trying to live up to the standard he set in Season 1.

“You’re going to see a wildly different arc in Season 2, but to me it’s just as satisfying,” he said. Schnapp, who plays Will Byers, also noted how his character will be more heroic in Season 2.

“Compared to last season, Will definitely shows more bravery,” Schnapp said. “You’ll learn how the upside-down affected Will, and you’ll get more into his storyline.”

And then there are the new characters. About halfway through the panel, Oswalt introduced three new cast members: Dacre Montgomery, who will play Billy, Sadie Sink as Max, and Reiser as Dr. Owens.

“The Duffers were very vocal with me about [how they were] playing with monsters as antagonists, and they wanted me to be a human antagonist,” Montgomery said, when asked to tease his character. “I hope I can be scary enough.”

Reiser wouldn’t confirm his villainous role, but did say his character was brought to town to clean up the mess made by Matthew Modine’s Dr. Brenner.

“Understandably, they’re a little nervous about this guy coming in to replace this freaking guy,” Reiser said, pointing to Modine. “I basically come in to clean up Brenner’s mess, and, uh, certain things happen.”

Sink was even more cryptic about Max. “She moves from California, so that’s how she fits into Season 2,” Sink said. And that was all she could reveal about the new member of the kids’ group.

Of note: The Duffer Brothers cited one of their inspirations for getting into television was Steven Soderbergh’s “The Knick.” Perhaps fans of the retired series can take solace in knowing its influence carries on.

This Article is related to: Television and tagged Comic-Con, Netflix, Stranger Things