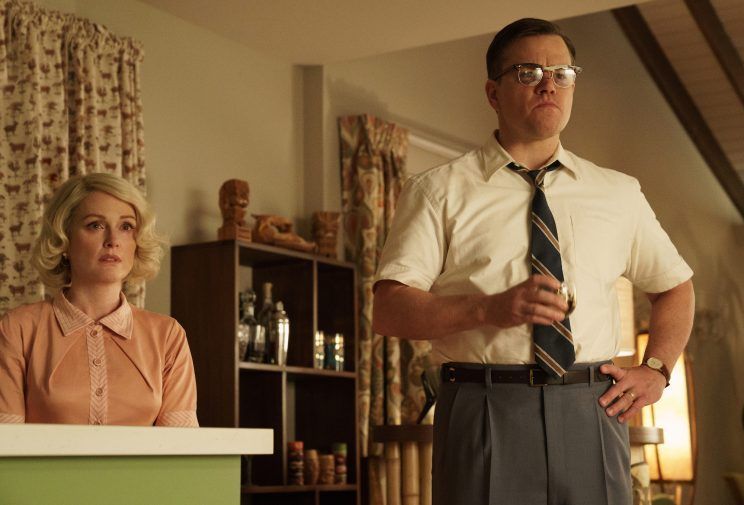 Fall film festival season is right around the corner, and included in today’s Toronto International Film Festival lineup is George Clooney’s “Suburbicon,” which marks his sixth directorial effort. The film is written by the Coen Brothers, marking a reunion of sorts after the three worked on “O Brother, Where Art Thou?,” “Intolerable Cruelty,” and “Hail, Caesar!” The cast includes Matt Damon, Julianne Moore and Oscar Isaac.

READ MORE: TIFF Reveals First Slate of 2017 Titles, Including ‘The Shape of Water,’ ‘Downsizing,’ and ‘Call Me By Your Name’

The synopsis from Paramount Pictures reads: “‘Suburbicon’ is a peaceful, idyllic suburban community with affordable homes and manicured lawns… the perfect place to raise a family, and in the summer of 1959, the Lodge family is doing just that. But the tranquil surface masks a disturbing reality, as husband and father Gardner Lodge (Matt Damon) must navigate the town’s dark underbelly of betrayal, deceit, and violence. This is a tale of very flawed people making very bad choices.”

Yahoo! Movies has debuted two first look images from the drama, which has an Oscar-ready October release date. The movie is having its North American premiere at TIFF, meaning it’s a given to world premiere at Venice at the end of the summer. According to Clooney, the Coen Brothers originally wanted to direct “Suburbicon” themselves after working on the script for years. The duo originally asked Clooney to play Oscar Isaac’s role in 2001, but he’s only behind the camera for the finished product.

“I’ve learned a lot from working with the boys,” Clooney told Yahoo! about working with the Coens. “They only shoot what the need. They’re really efficient. They storyboard all of their shots. They just do takes until they get what they need and then move on. I try to do all of those things.”

“Suburbicon” marks Clooney’s first feature since “The Monuments Men” opened in 2014. Paramount is releasing the film in theaters October 27.