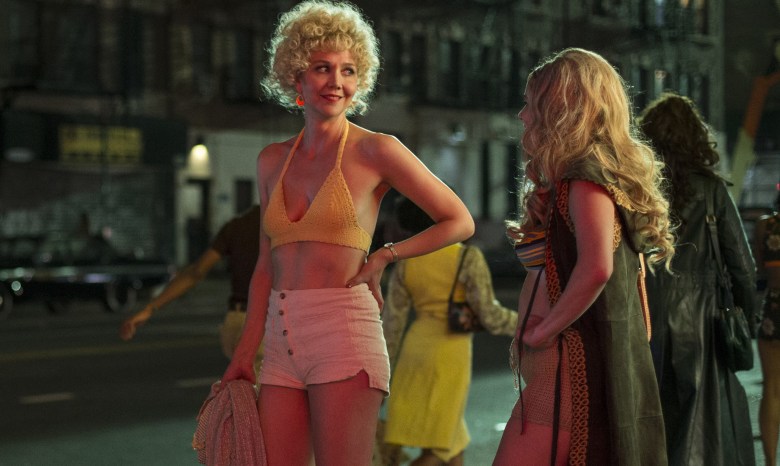 “You portray it by being direct,” co-creator David Simon told reporters Wednesday at the Television Critics Association press tour. “It would be a mistake to look at this and think that we are in any way trafficking in misogynistic imagery or objectification as one of the currencies driving the show. That’s what the show is about. I’m not sure how you make the show and avert your eyes and clean it up.”

The series looks at the law enforcement, the prostitutes, the pimps, the mafia and other players in New York who laid the groundwork for the lucrative industry. The cast also includes Gary Carr, Margarita Levieva, Dominique Fishback, Emily Meade, Mbenga Akinnagbe, Chris Bauer, Chris Coy, Natalie Paul and Michael Rispoli.

“This is a moment where you actually get to see something go from paper bag beneath the counter and then suddenly, it’s legal,” said Simon. “Everyone realizes that the money involved in that is going to be real. What happened to those people,the pioneers who became caught up in it or seized it aggressively and willingly is really fascinating. The product is not a normative product. The product is human flesh. It’s objectified women. In making it into a billion-dollar industry, there’s something telling about who gets paid, who gets left out, who gets betrayed, who gets some degree of agency, who doesn’t. If we’ve made something that’s purely titillating, then damn us.” As an actress playing one of those objectified women, Gyllenhaal also weighed in.

“I think it’s become clear in a way that maybe it wasn’t totally clear a year ago that there is a huge amount ofmisogyny in the world. I think we thought we were in a better place than we were,” she said. “Here we have this opportunity to pick it up and lay it on the table and to do it in a way that’s thoughtful and smart, and also real. So that includes having to see some things that look violent and uncomfortable, but I think if you don’t put that on the table and take a really good clear look at it, nothing will change and nothing will shift. I feel like playing a prostitute who does go through very difficult things as a filter through which to look at women and our relationship to sex, to power, to cash, to art … is one of the most interesting ways to go into really exploring the state we’re actually in right now.”

Gyllenhaal also acknowledged that the content might create a dissonance in its viewers. “In a way if the show also turns you on a little and then makes you consider what’s turning you on and why… it’s a better show,” she said. “It should make you consider your position in how sex is commodified.”

This Article is related to: Television and tagged David Simon, Maggie Gyllenhaal, TCA, The Deuce