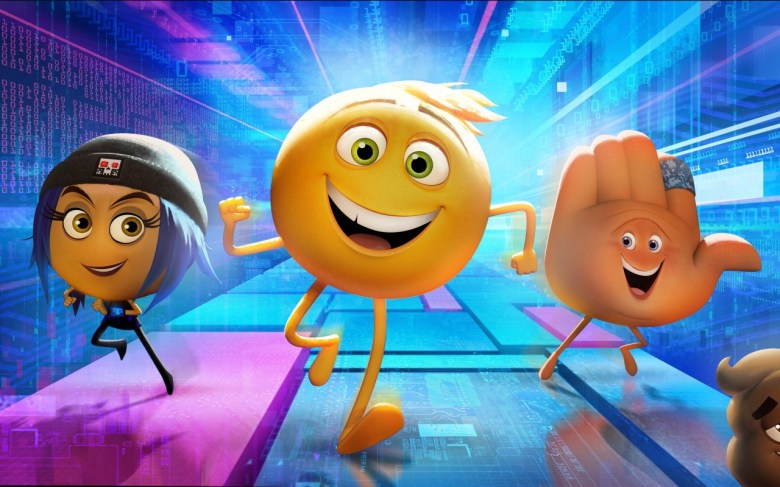 “The Emoji Movie” might seem like a brazenly cynical cash grab that only exists because a Hollywood studio saw an opportunity to brand the most universal human language since the invention of math (apologies to Esperanto), but Sony Pictures Animation’s big new blockbuster has represented something very positive since the start of this summer movie season: hope. Specifically, the hope that — for 90 beautiful minutes — Hollywood would spirit us away to a cinematic world that was somehow actually worse than real life. What a gift it would be in July 2017 to leave the multiplex and actually come up on our way back to reality, to feel the faint nausea of ascension for the first time all year and be reminded that it’s still possible for things to get better. Alas, blind optimism is a dangerous game in this day and age, and there is no such respite to be found here.

Make no mistake, “The Emoji Movie” is very, very, very bad (we’re talking about a hyperactive piece of corporate propaganda in which Spotify saves the world and Sir Patrick Stewart voices a living turd), but real life is just too hard to compete with right now. Not even a gaudy monument to late capitalism that masquerades as children’s entertainment — a film that bends over backwards to teach your kids that true happiness is always just an app away — can measure up to what’s happening off-screen. Not even a witless cartoon that unfolds like a PG-rated remake of “They Live” as told from the aliens’ POV feels as toxic as glancing at your Twitter feed or (God forbid) turning on the television news.

People, this is a classist family comedy in which James Corden — voicing an anthropomorphic hand named Hi-5 — stands on a pile of obsolete devices and forlornly sings the lyric “Nobody knows the touch screens I’ve seen,” and it’s still a significant improvement on the infernal nightmare that’s raging beyond the dark walls of the movie theater. It’s not even close. Indeed, the most distressing aspect about “The Emoji Movie” is that a spectacle this self-evidently soulless no longer feels like a new low. It doesn’t even leave a dent.

Shamelessly repurposing the premise of “Toy Story” for the age of texting (director Tony Leondis has said that he came up with the idea when he was thinking about toys and someone texted him an emoji), “The Emoji Movie” begins with a high school freshman named Alex. Alex has a problem: He doesn’t know how to talk to girls. Maybe he’s self-conscious about the fact that he still looks like he’s 10, or maybe he’s just one of those idiots who still tries to write his love notes with actual letters (“words aren’t cool” one character snarks at the start of a story that never argues otherwise). Literacy is for losers, Alex. Fortunately for our hero, he’s got a secret weapon hiding in his pants: a smartphone. And inside that smartphone there’s a whole world of trademarked ideograms just waiting to help him electronically harass his crush.

Just like that, we’re transported to the magical land of Textopolis (essentially just a communistic ripoff of Monstropolis from “Monsters, Inc.,” to continue the Pixar thievery). In Textopolis, each emoji is born with one very particular function, and their only purpose in life is to wait for their phone’s user to summon them into action. There’s no such thing as freedom or upward mobility; every emoji is simply endowed with the characteristics they represent. The laughing face is always laughing, even when it breaks an arm, the sad face is always sad, even when it wins the lottery, and so on. This leads to some very painful gags (the monkey emojis are always monkeying around!), and a small handful of amusing puns (the old-fashioned emoticons are elderly citizens, one of whom gripes about his sore colon).

How exciting to enter a film world in which all of the characters literally just tell us who they are over and over and over again like they’re not physical manifestations of the feelings that define them! The brilliant Maya Rudolph adds all sorts of passive-aggressive texture to Smiler, the homicidal smiley face who lords over this place, it’s just too bad that every single one of her lines is some variation of “can’t you see how happy I am?” Yes, yes we can. Your body is a giant smile with legs.

But Gene (a very bored T.J. Miller) is different. He’s one of a kind. Like all of the major characters here, he boasts a quirk that makes him unique to Alex’s phone / original enough to avoid any lawsuits. A “meh” emoji who can’t help but love everything about life in Textopolis, Gene is constantly wearing other expressions. One second he’s smiling, the next he’s got hearts in his eyes. His apathetic parents (Steven Wright and Jennifer Coolidge as Mel and Mary Meh, respectively) might seem like they’re just shrugging this off, but they’re actually horrified by the idea that their son may not be as meh as he was mehnt to be. What’s going to happen when Alex tries to send “meh” to his crush, and a fart cloud is sent to her phone instead? BAD THINGS, that’s what. In fact, Gene’s emotional instability puts his entire world at risk, as Alex makes an appointment to restore his malfunctioning phone at his local generic-brand Genius Bar. This is a real movie. This actually happens.

Page 1 of 2
Continue Reading: Review: ‘The Emoji Movie’ Is Almost as Bad and Brutally Depressing as Everything Else in 2017

This Article is related to: Film and tagged Reviews, Sony Pictures Animation, The Emoji Movie