Luc Besson returns with a space oddity so high on its own supply that it makes “Guardians of the Galaxy” look like an Ozu film. 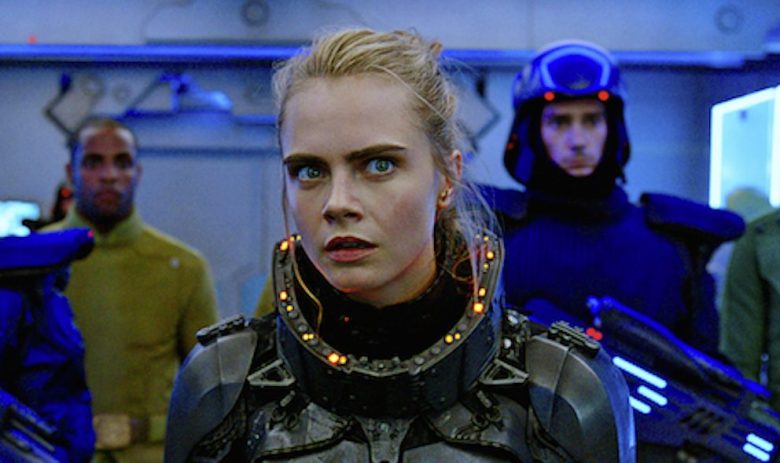 Imagine if someone projected an entire decade’s worth of sci-fi space epics on the same screen, at the same time. Imagine you were in the audience for that event. Now imagine, for some insane reason, you decided to pre-game for the experience by eating an entire bag full of mushrooms that had been garnished with a fine layer of France’s best crystal meth. That, more or less, is what it feels like to watch Luc Besson’s delirious “Valerian and the City of a Thousand Planets,” an independently financed $200 million intergalactic adventure so high on its own supply that it makes makes “Guardians of the Galaxy” look like an Ozu film (and not even one of those later Ozu films that he jazzed up with color).

This is a movie with the density of a dying star, a movie that offers more things to see in every frame than you can find in some entire franchises. It’s a movie that features Herbie Hancock as a deep space defense minister, Rihanna as a shape-shifting alien stripper named Bubble, and Ethan Hawke as a guy named “Jolly the Pimp,” and it’s a movie so full of stuff that those three characters barely manage to stand out. Like everything else here, they are dissolved into the  marrow of Besson’s delirious, hyper-active nonsense, congealing into a spectacle that feels like a necessary corrective to the sterility of modern blockbusters until it runs out of gas (or whatever the hell they use for fuel in the 28th Century) and gets sucked into a black hole of its own making, never to be heard from or thought of again.

Based on the Pierre Christin and Jean-Claude Mézières’ graphic novel series “Valérian and Laureline,” Besson’s latest brain-scrambler is exactly the movie you’d think might result from giving the director of “Lucy” the GDP of a small country and sending him into the stratosphere with complete creative control. In fact, it’s so unapologetically idiosyncratic that its hackneyed opening cue — David Bowie’s “Space Oddity” playing over the image of two spaceships docking in orbit — almost feels like a cheeky joke at the expense of our expectations. “This is the tedious, overly familiar shit you’ve seen a zillion times; now buckle up so we can warp into the future.”

And so we do, Besson’s ingeniously succinct prologue carrying us across the centuries with a montage of people meeting amongst the stars and shaking hands (or shaking tentacles, as becomes the case once alien civilizations enter the mix). It’s the perfect introduction to a story that’s preoccupied with the collision between worlds, the film eventually settling down on the near-infinite metropolis of Alpha, a base that is home to more than 8,000 separate species of intelligent life (who, I suppose, have come from 1,000 planets).

But the movie peaks before we even get there, Besson introducing his immensely bland leads and then immediately hurling them into one of the most inventive action sequences you’ll ever see. Valerian (Dane DeHaan) is a government space agent of some kind who acts like Han Solo and dresses like Leonardo DiCaprio in Baz Luhrmann’s “Romeo + Juliet” (hang onto those Hawaiian shirts, apparently they’re gonna come back in style in 700 years). He’s a scrawny cartoon of masculinity, devoid of any personality save for his desire to shoot things and screw girls — one girl in particular. Her name is Laureline (Cara Delevingne), she’s Valerian’s partner, and while it’s clear that she’s the dominant member of the team, the banter between these two characters is so astonishingly tin-eared that it’s genuinely hard to tell how she feels about floating in space with a walking, talking, sallow-faced boner. Valerian asks her to marry him right off the hop, but it’s never the least bit clear how seriously we should take that proposal; do they love each other, or is it just that they’re two of the last humans in the universe? Why do they always feel like children?

It doesn’t matter, the movie is off to the races before you can come to grips with how little you care about anything that’s happening in it. Valerian receives a psychic transmission from a dying alien world and then the next thing you know he and Laureline are dropping in on a desert planet in order to steal a living MacGuffin from an inter-dimensional duty-free market that seems ripped from Guillermo del Toro’s fever dreams (this is the rare case where the 3D actually helps you make sense of space). The chase sequence that follows — a parade of paperback wonders that includes a floating school bus, alien body-hacking, and a narrow escape for the ages — moves between its glories with Spielbergian grace. The first 25 minutes of this movie should be mounted as an installation at the Louvre and played on an infinite loop. Only then can our planet know peace.

Page 1 of 2
Continue Reading: Review: ‘Valerian and the City of a Thousand Planets’ Is Like ‘Star Wars’ on Crystal Meth, and It’s Almost Crazy Enough to Work

This Article is related to: Film and tagged Cara Delevingne, Reviews, Rihanna, Valerian And The City Of A Thousand Planets