Another teen story preaching the pitfalls of normalization, "Atypical" makes for an easy, if insubstantial, binge. 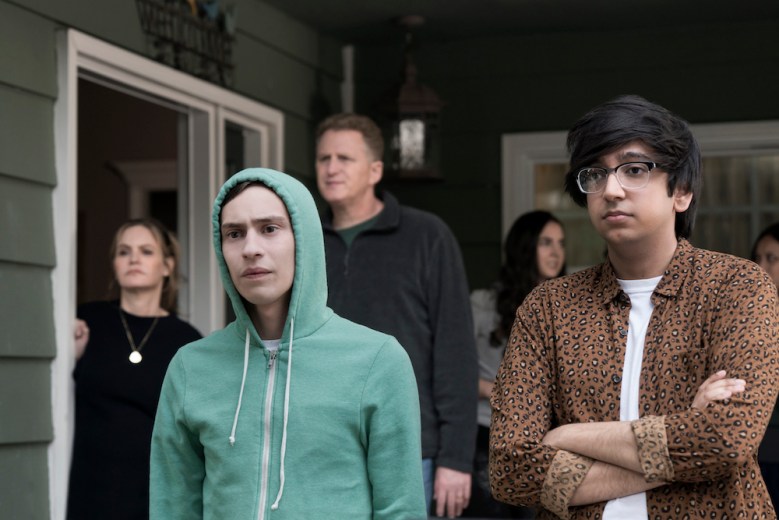 And that brings us to the second and most damaging character: Elsa, Sam’s mom, played by Jennifer Jason Leigh. Though she complains about being the “bad guy” when disciplining their son, it’s hard to feel sorry for her when she literally dug the hole herself, onscreen and off. By either accepting the deeply flawed part as written or doctoring it down via her producing powers, Leigh made Elsa, in nearly every imaginable scenario, the antagonist of Season 1.

Right from the start, Elsa is there to shoot down Sam’s dream. That she’s an overprotective mother is almost entirely implied by harsh actions and a closed-off attitude, but when Sam first brings up dating, she says he’s not ready. When Casey defends a kid being bullied, Elsa takes the bully’s side. When Sam wants to go to the mall, she says no. They did it once, and they’ll never do it again.

Elsa pays mouth service to Sam’s growth, but she never shows us she believes in him. Viewers are made to believe that’s because of a scary past event — one that set her protective instincts into overdrive — but that does little to overcome her status as the constant obstacle in everyone’s way. [Editor’s Note: Here’s where we’re going to get into spoilers, so skip to the last paragraph if you want to remain unspoiled.] “Atypical” takes every opportunity to make Elsa unlikable, and her affair with Nick (Raul Castillo) is the least of it. She’s literally a barrier to happiness for every character. Sam avoids her when he’s not trying to convince his mom to trust him. Casey is the one who learns Elsa’s terrible secret, but she was already mad at her mom for treating her like a second place sibling. (Oh, the dramatic irony of all her first place track trophies, run in front of her mother.) And then there’s Doug, who’s still paying for an admittedly egregious sin, but who’s only portrayed as a devoted, loving, adorable dad.

That the season ends on a cliffhanger of its worst plot line gives off a worse impression than the series deserves. The ending is predictable, as was the series in general, but Keir Gilchrist’s performance saves it. Innocent but never overly whimsical, Gilchrist doesn’t fall into the traps of a role that begs for empathy at every turn. Sam isn’t made into an object of pity (not too often, at least), so much as he’s held to a strict, established standard: Sam likes rules, and Gilchrist seems to be following a set of his own.

There are certainly more, but Sam likes to keep it to three rules, so we can, too. No. 1 is most important, as portraying an emotional teen requires a lot less emoting when said teen is on the autistic spectrum. Notice how that doesn’t mean his emotions aren’t there. “Atypical” does a fine job promoting the idea that just because you can’t see everything swirling on the surface, Sam can still be feeling everything internally. (The best scene of the series comes when Sam is being picked on, and over voiceover he says, “People think I don’t know when I’m being picked on, but I do. I just don’t always know why, which in some ways is worse.” We see that reaction in how the scene is shot more than Gilchrist’s specific expressions, but the two compliment each other for a deeply moving moment; a moment that could have been saccharine if Gilchrist tried to do too much.)

That same kind of understanding and trust are shown in following the next two directives: The few, legitimate jokes sprinkled throughout episodes aren’t read as such by Gilchrist, and his eyes regularly dart away from the people he talks to; unless he’s so wrapped up in what he’s saying he can’t look away. These kind of details, consistently hit, make for an impactful central performance.

It also helps elevate “Atypical” overall. What could’ve been a torturous game of meeting low expectations flips the other way: Sam’s through-line is solid, and his supporting players offer more pleasant surprises than frustrating distractions. If this is what gets the Keep Kids Weird message across, so be it. If not, it’s still worth the effort.

This Article is related to: Television and tagged Atypical, Netflix, TV Reviews