Plus, the star opens up about the intense freedom afforded to the film by Netflix. 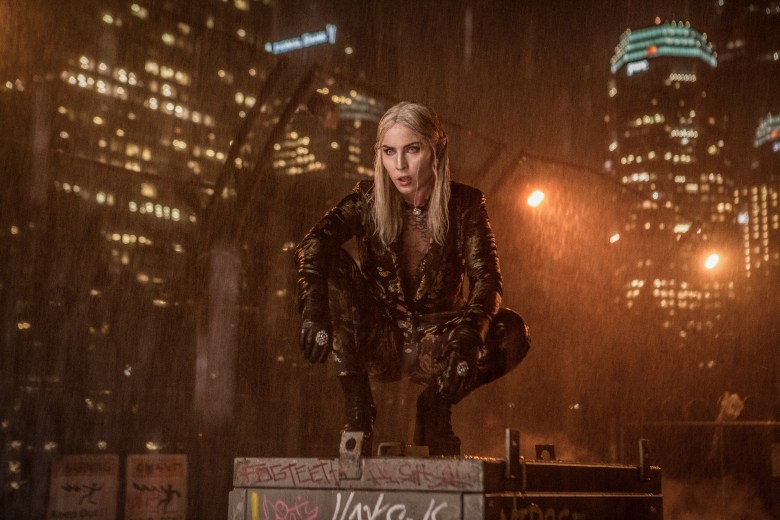 For his first post-“Suicide Squad” offering, director David Ayer is returning to some familiar stomping grounds — with a twist. The director’s wild new Netflix feature “Bright” hues close to Ayer’s earlier films about hardened cops and criminals duking it out on the mean streets of Los Angeles, with the addition of orcs, fairies, and elves. For Ayer, it seems that the key has been tapping into his creativity and the tough stuff that made films like “Training Day” and “End of Watch” work, at least that what his leading lady Noomi Rapace thinks, and she couldn’t be more excited about the fantastic (literally) doors the new film opened for her.

“It’s a complete new universe,” the actress said in a recent interview with IndieWire. “I read the script and I was like, ‘Oh my days, this is…I don’t…I’ve never seen this, I’ve never dreamt about this.’ I grew up in Iceland with elves, we kind of believe in elves and this is like elves and orcs and lizard people and humans working side by side, living together in LA, in modern LA, downtown LA, career town.”

Written by Max Landis, the film is set in an alternate present-day in which humans share their world with various other creatures, including those elves and orcs Rapace mentioned (and lizard people, too, apparently), along with fairies and other seemingly fantastical beings. “Bright” follows a human cop (Will Smith) who is paired up with the force’s first orc officer (played by Joel Edgerton), a tenuous relationship that has roots in the real world. (At this year’s Comic-Con, the racial allegory aspect was on full display, and Ayer commented, “It’s about a fucked-up L.A., but this is a fucked-up world, so I get to explore those issues.”) The pair are forced to work together when a mysterious and powerful relic reappears, one that could threaten the lives of every being in this wild world.

As out-there as this all sounds, Rapace is clear that Ayer’s film is very much in line with his features before he got into franchises with his “Suicide Squad,” raw human dramas that don’t skimp on the tough stuff. That’s the sort of attitude that Ayer apparently brought to “Bright.”

“You can really feel David’s [other films] ‘Harsh Times,’ ‘Training Day,’ and ‘End of Watch,’ that kind of rawness and real authentic feeling,” Rapace said. “It’s not magical kind of fantastic sci-fi. It’s very real, it just happens to be orcs and elves and creatures that are not from our world. I think it can be a complete new wave.” Will Smith and Joel Edgerton, “Bright”

Rapace, no stranger to action films, added that the new film is “very intense” and will feature “a lot of fight scenes.”

But as challenging as that could be for a director, Rapace believes that the unique relationship between Ayer, who has worked on features small and very large, and Netflix has allowed the filmmaker to reach new levels of creative freedom.

“I was very happy because my director was in a space where he could do what he wanted,” Rapace said. “He said that, several times, that it’s his baby and he can do whatever he wants. It’s less people involved and I think, for him as a filmmaker, that gave him a certain freedom. His whole energy around him and the atmosphere he created for us actors was a very fun and creative place to be in.”

While the industry continues to debate the merits and possibilities of the streaming versus theatrical debate, Rapace seems to be approaching the conundrum with a very positive attitude. “Bright” is her second Netflix feature to arrive this year, as “What Happened to Monday?” debuted on the streaming platform just last week, another high-concept actioner that will likely benefit from getting in front of plenty of eyeballs.

“It’s kind of amazing that people in 190 countries can see my movie at the same time,” she said. “It’s a new time, it’s a new era, and I think we’ve got to embrace it. My son is turning 14 and all his friends are like, they watch everything on Netflix.”

Still, she added, “I think it’s something we’ve got to roll with. I love changes, I believe in changes, but I also think we need to protect theatrical releases. Some movies should be seen on a big screen in a theater. But I feel like it’s very exciting.”

“Bright” will hit Netflix on December 22.