If Carrie Coon won't take credit for her astounding work on "Fargo," her co-stars will make the case for her — and share a few other stories. 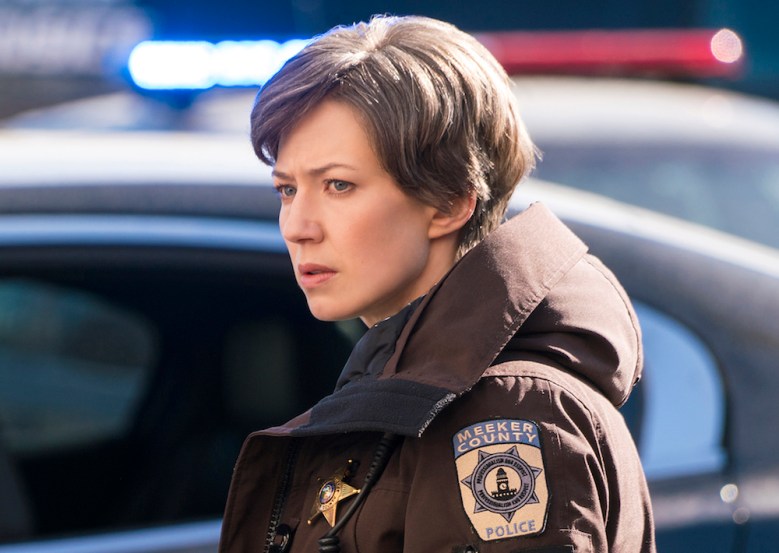 “Fargo” is more than a place; it’s a Midwest state of mind. Mention as much to Carrie Coon, a Midwesterner from the eastern end of the region (Ohio) now living in its heart (Illinois), and she’ll rattle off an impressive list of accurate ideological descriptors.

“The ethos of that place,” she said in a recent interview with IndieWire. “That particular brand of stoicism and emotional restraint; the belief that bad things won’t happen to good people and that you have some control; this idea that we can make meanings in our lives, even though the reality is that we have very little control over anything.”

All of these things are built into “Fargo,” but there’s one other characteristic that stands out to Coon above all the rest.

“There’s a kind of Protestant work ethic,” Coon said. “We are going to manage whatever comes our way, and we’re not going to ask for help. That is very much akin to my people.”

It’s certainly a part of Coon. Despite her natural understanding of the region and its people, Coon dug deep into Gloria Burgle. She built a specific character who represented us all, and she did so quickly, efficiently, and with an incredible amount of heart.

“We made the most of the time we did have together,” Olivia Sandoval, Coon’s “Fargo” co-star, said of the rapid shoot. “She just has one of the best work ethics I’ve ever seen. To this day, when I’m going out on an audition or looking for a part, one of the first things I ask myself is, ‘I wonder what Carrie would do in this situation?'”

“I think her work speaks for itself,” Ann Dowd, who co-starred with Coon in “The Leftovers,” said. “The strength of her work [will speak for itself.] Certainly her work ethic is inspirational to me.” Viewers got the chance to see what Coon was capable of in the third episode of the season — a standalone hour for Coon and her character, the truth-seeking, technology-averse Eden Valley ex-police chief Gloria Burgle. In “The Law of Non-Contradiction,” Gloria becomes the first “Fargo” character to travel beyond the Midwestern bubble when she flies to the City of Angels. She’s taking “Fargo” out of Fargo, and the transition isn’t easy.

“The vegetation, the sort relaxed but very image conscious community, the flora, the fauna: Everything about it just felt like, on a cellular level, I did not belong in that city,” Coon said, remembering her fist trip to L.A. “So it didn’t feel necessarily challenging for me to go and play that fish-out-of-water story.”

Coon, though, is being modest — a Midwestern trait if there ever was one. One of the more remarkable aspects of her performance in Episode 3 isn’t made clear until the penultimate episode. During a scene at a bar with Sandoval’s character, Winnie Lopez, Gloria finally says what she’s been holding inside all along; she unburdens all the scary, frustrating, and troubling thoughts that were silently expressed in Episode 3.

“We had an anticipation about this scene because it was a later edition,” Sandoval said. “It wasn’t in the original script. We both received it when we were up there in Canada, and we immediately texted each other because we were so excited that Winnie and Gloria got to have this bit of closure.”

Continue reading for secrets from the sets of “Fargo” and “The Leftovers.”

Page 1 of 2
Continue Reading: Carrie Coon May Be Midwestern, but ‘Fargo’s’ Gloria Burgle Was One of Her Greatest Challenges Yet

This Article is related to: Awards and tagged Carrie Coon, Consider This, Emmys, Fargo