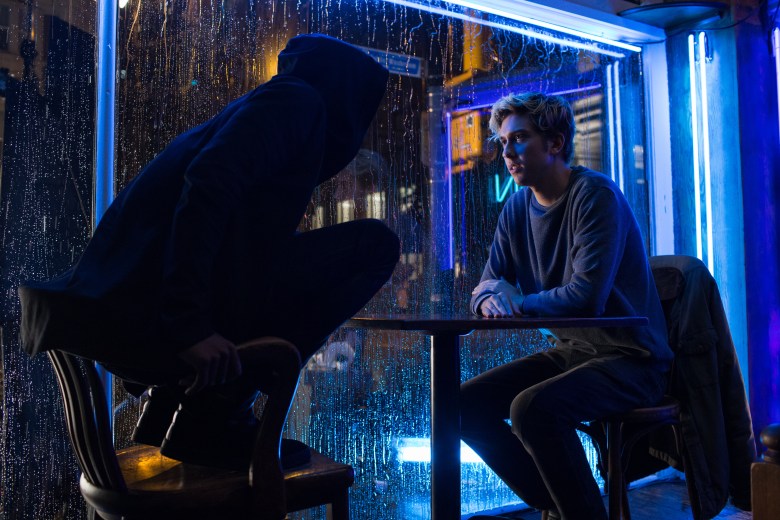 Adapting “Death Note” into a feature-length American movie was always a colossally bad idea — Tsugumi Ohba’s manga ran 108 chapters, and there’s a good reason why the only decent riff on the original was an anime series that ran 19 hours — so neglecting to include Japanese-American actors among the top-billed cast just made things that much worse. It was a bad decision on top of a festering pile of bad decisions, but it was also the kind of mistake that reveals the wrongheadedness of an entire project.

Whitewashing is never a purely aesthetic act; it’s always an indication of a deeper rot. In this case, it pointed toward an inability or unwillingness to meaningfully engage with the source material. The only reason to take such a uniquely Japanese story and transplant it to Seattle is to explore how its thorny moral questions might inspire different answers in an American context, so for this retread to all but reduce America to its whiteness indicates an absence of context more than anything else. It’s the most glaring symptom of a film that utterly fails to investigate its premise and wastes a handful of goofy performances and a gluttonous degree of hyper-violence in the service of a total dead end. Why go through all the trouble of setting “Death Note” in America if you’re not going to set it in the real one?

The scenery my have changed, but the basic story remains the same: A bored teenager named Light (a serviceably bland Nat Wolff) is minding his own business during another day of high school when an enchanted journal literally falls out of the sky. It’s a Death Note! (You can tell because it says “Death Note” in big letters on the cover). When a curious Light cracks the book open, he finds that someone has been kind enough to fill the pages full of instructions. There are a zillion different rules, but the first one is the biggie: If you write someone’s name in the Death Note while picturing their face, that person will die.

It’s an irresistible idea, and every iteration of this overstretched property has had fun with the process by which Light comes to learn that the rules are real. Here, Light immediately writes down “Donald J. Trump,” and things get really interesting. Just kidding, he just tests it out on the usual gaggle of bullies and random criminals.

The one twist that gorehound director Adam Wingard (“The Guest”) adds to the mix is the assassinations are executed in the style of a “Final Destination” film. So if Light scribbles that someone gets decapitated, the death ultimately results from a Rube Goldberg-like series of events that ends with a ladder going through their brain. In a film that tries to cram 10 liters of story into eight ounces of time, it’s extremely frustrating to see so much of it wasted on gratuitous kills that can’t even stack up to the creative bloodlust of the trashy B-movies they rip off.

On the other hand, this is the only juncture where screenwriters Jeremy Slater and Charley and Vlas Parlapanides invent a truly “American” turn of events: When Light discovers that he’s pretty much endowed with the power of God, he immediately tells the hottest girl in his class. Mia (Margaret Qualley) isn’t scared away by the whole thing. On the contrary, this painfully underwritten love interest is all about that murder life, and it isn’t long before she’s encouraging Light to kill strangers, ISIS leaders (of course), and maybe even our antihero’s cop dad (a soulful Shea Whigham).

The one person they can’t seem to kill is L (MVP Lakeith Stanfield, who is neither white nor Asian, but convincingly speaks fluent Japanese). L is the world’s greatest detective. Also, he loves candy. That’s really all you need to know. Stanfield plays him as a fidgety, tortured preternatural genius with a touch of Asperger’s. Full of crumpled poses and sudden emotional shifts, it’s a compulsively watchable performance that feels like it’s been ported straight out of an anime.

If anything, L is too good. “Death Note,” in all of its forms, ultimately boils down to a twisted game of cat-and-mouse between L and Light, but this matchup is too lopsided to be any fun. L is a kooky 21st-century Sherlock Holmes — Light does other students’ math homework for money and screams at the top of his lungs when he first meets the demon who comes with the Death Note. Ryuk is the signature character of the franchise, as inextricable from the mythos of “Death Note” as Yoda is from “Star Wars.” Unlike Yoda, he’s a morally ambivalent CG eyesore voiced by Willem Dafoe and becomes a wretched blight on a movie that doesn’t need him. Faithful to the manga, Wingard’s Ryuk looks like a zombified Lou Reed cosplaying as a member of the Night’s Watch; he looks so terrible that Wingard is apparently too embarrassed to bring him into focus. Why not just make him a disembodied voice in Light’s head? Why not learn from the mistakes made by every previous live-action version of “Death Note”? Why not abandon this terribly rushed Netflix film altogether and make a well-paced Netflix series instead?

The mind reels as the movie races. The film doesn’t try to sweep through the entire “Death Note” saga, but it sprints through the early stages before tying things up with an abrupt ending that hopefully leads to a mulligan and not another movie. When all is said and done, this story of incremental moral compromises has abandoned everything but its sense of style. In that empty respect, this is Wingard’s most accomplished work to date, the director hitting upon a vaguely cartoonish vibe that’s powered by neon glows, inexplicable ’80s bangers from the likes of Air Supply and Berlin, and all sorts of slo-mo setpieces. It’s a shame that Wingard keeps pulling this movie into the past, as the Death Note is most interesting in the brief moments when it’s framed as an internet-age metaphor for anonymous trolling and doxxing and all that ugliness.

But Wingard doesn’t really seem to know what he’s hoping to accomplish here. Specifics are a major problem; everyone’s just going through the motions, trying to crunch the franchise’s mythology before time runs out. The film opens with a generic shot of the Seattle harbor, and that’s the only coherent worldview. After that, it’s a sprint through the basics: Everyone thinks they alone are solely capable of dispensing true justice, but power corrupts, absolute power corrupts absolutely, and things get wildly out of hand. It turns out that playing God is never as simple as it seems. Didn’t we already learn that lessons from “The Craft?” Or from “Bruce Almighty,” for that matter? It doesn’t matter; by the time Light and Mia wind up at the top of a ferris wheel with the future of humankind at stake, you probably won’t know how they got there, and you definitely won’t care where they are.

The city beneath them looks enough like Seattle, but it’s an arbitrary backdrop, its candied world only recognizable for its landmarks. The people in and above it don’t feel real, and they exist in a vacuum. Here’s hoping that the next time a Death Note plummets from the sky it lands in the hands of a filmmaker who recognizes that neither where the Death Note falls to Earth, nor who is there to find it, are as arbitrary as they first appear.

This Article is related to: Film and tagged Anime, Death Note, Netflix, Reviews