The manga adaptation, which casts a white actor in its lead role, is now on Netflix. How can we parse the uproar that has greeted its release?

By David Ehrlich and Hanh Nguyen 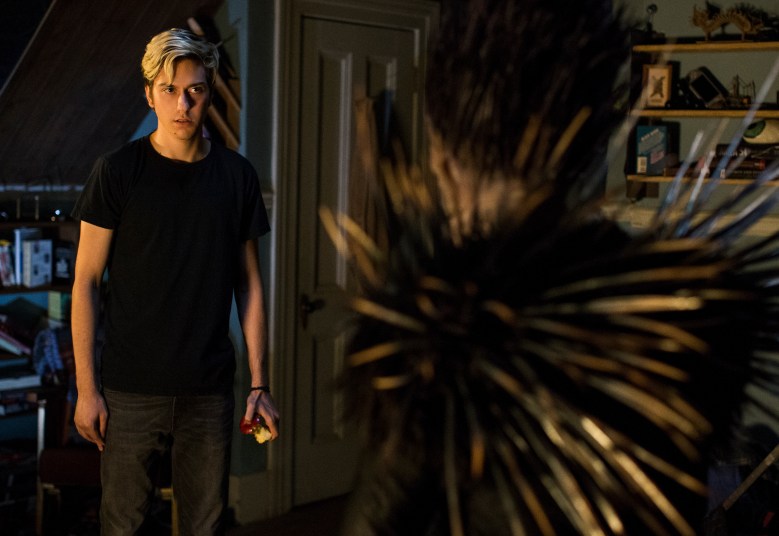 So Netflix’s “Death Note” is finally available to stream around the world, and everyone is completely thrilled about it with no reservations whatsoever, the end.

Just kidding. While the release of Adam Wingard’s controversial manga adaptation has been overshadowed by everything from Hurricane Harvey to “Game of Thrones” and even a different story of Hollywood white-washing (albeit one with a happy ending, thanks to actor Ed Skrein agreeing to remove himself from the “Hellboy” remake), the movie has been kicking up a fuss ever since it was first announced that none of its major characters would be played by actors of Asian descent. The case may not be quite as cut-and-dry as it was with this year’s ill-conceived “Ghost in the Shell” remake, but the discussion around it may be even more valuable for that.

Below, IndieWire critics David Ehrlich and Hanh Nguyen dig into the issue.

David: In my less-than-enthusiastic review of the film, I wrote the following:

Whitewashing is never a purely aesthetic act; it’s always an indication of a deeper rot. In this case, it pointed toward an inability or unwillingness to meaningfully engage with the source material. The only reason to take such a uniquely Japanese story and transplant it to Seattle is to explore how its thorny moral questions might inspire different answers in an American context, so for this retread to all but reduce America to its whiteness indicates an absence of context more than anything else. It’s the most glaring symptom of a film that utterly fails to investigate its premise and wastes a handful of goofy performances and a gluttonous degree of hyper-violence in the service of a total dead end. Why go through all the trouble of setting “Death Note” in America if you’re not going to set it in the real one?

Hanh, am I off-base about this one, or did it bug you, too?

Hanh: This version of “Death Note” was frustrating, for many of the reasons you mentioned in your review, and the whitewashing just added that extra layer of insult. This story, like many taken from the most popular anime or manga, has cultural significance to Japan. For example, “Akira” is about post-war Japan, even though it’s set in “Neo Tokyo.” In particular with “Death Note,” the concept of a death god is very common in Japanese lore, and therefore comes with a set of expectations or rules. Setting the story in Seattle and not having anyone Asian American play the role of Light Yagami, now Light Turner, removed that context. David: Agreed. There were definitely attempts to change the story for its new setting, and Light’s relationship with the (increasingly sociopathic) Mia character is an interesting way to shrink a mammoth mythology down to a feature-length installment, but the original “Death Note” is so culture-specific, and it seemed like Wingard and his team decided to ignore that altogether rather than grapple with what it meant, and how it might be altered.

Sure, Light is a lot dumber in this version, and there’s something intrinsically American about how he can’t help but tell his crush about his magic book that kills people (intrinsic to the rules of American high school movies, at least), but the vanilla treatment suggests that race/culture/identity isn’t important to this story. In which case, genre stylings notwithstanding, whiteness — and a lack of Japaneseness — become some of the only notable ways that this film differentiates itself from the previous iterations of this property. And that doesn’t sit well. Neither does the implication that whiteness is synonymous with the American experience.

For me, that was what made this more egregious than a lot of remakes of Asian films. “The Departed,” for example, leans so hard into its Boston setting that it becomes a completely new thing altogether. But the laziness of this adaptation, particularly in such a charged cultural climate, struck me in a different way.

Hanh: Right, and the point you had of being American doesn’t equate with being white is a the crux of all of this because when we’re talking about representation, it’s very specifically about representation in America. There was a story last year about how the Chinese didn’t mind that Matt Damon’s character was the white savior in “The Great Wall.” Well, of course not.

These are two issues at work here. One, being a native in an Asian country puts you in the majority, and therefore, representation of Asians is everywhere in those films. It’s Asian Americans who need better representation in their own country. Secondly, I’m going to cite writer Jeff Yang here about his thoughts on film marketing. International markets and especially Asian ones, have been used to a diet of white stars as stars of American imports. It’s familiar and therefore bankable. Even smaller films that feature lesser known actors are still more attractive if a white face is in it because it’s ‘foreign’ to them, but also as Yang puts it, it’s “easier to sell a random white dude in Asia than [a] random Asian dude.”

Of course, whitewashing doesn’t continue to happen just because of money, although that’s a huge part of it. No one wants to be considered racist, but there’s an implicit bias to not think of Asian Americans as Americans at all. Our faces read as foreign.

Then there’s the stereotype of Asians as hard workers who won’t rock the boat and speak up, which is clearly not the case lately at least. In fact, Asian Americans are calling actors out by name now for accepting whitewashed roles. Perhaps my favorite examples is the AsianAF show that created the t-shirt that reads, “Scarlett & Emma & Tilda & Matt,” listing all the actors recently who have played whitewashed roles, and then there was the recent Los Angeles event in May, “Scarlett Johansson Presents: Asian-American & Pacific Islander Heritage Month.” David: Yeah, I think it usually happens in cases like this not out of malice, but out of minimization. It happens  because white writers/directors/producers don’t even think to address the problem, and they don’t think to address the problem because they’re surrounded by other white people. But, when it comes to “Death Note,” that reading is complicated by the fact that it was produced by Japanese “Heroes” actor Masi Oka, who says he produced the movie to “protect the series.” I don’t bring that up to suggest that he betrayed his people or some way — in general, when we’re discussing this stuff, I tend to think that good-faith dialogues are a lot more constructive than pure accusations, if only because the former promotes growth and the latter triggers defensiveness — but does Oka’s involvement affect your take on this in any way? Was he just in a tough spot?

Hanh: Oka’s presence on the project gave me hope initially, but seeing the result, it’s difficult to believe that he had a huge say in the casting. In the press he did his duty to support the production by saying that they had tried to find an Asian actor for the star, but that they couldn’t find one whose English was good enough. That’s bullshit since Asian Americans are just like other Americans when it comes to the range of their English-speaking skills, and for some, English might be the only language they know.

David: True. The whole “we cast the right actors for the roles” thing doesn’t really pan out when the roles are a problem in the first place. Also, I like Nat Wolff just fine, but he’s not Daniel Day-Lewis. It’s insulting, even to some white film critic who’s just trying to be as woke as possible, to suggest that there’s no age-appropriate Asian-American actor who couldn’t have given a performance of the same caliber. And the Netflix thing only underlines that further, because the movie wasn’t beholden to the box office, it didn’t really need whatever star power Wolff brought to the production. Hanh: And to take it back to your previous point, I’d agree that attacking without actual dialogue and education puts people on the defensive, but I’d also say that even thoughtful, salient points often get dismissed as well. Sometimes attention-getters like the t-shirt above, which I also see as a rallying cry for Asian Americans, are tools for explaining our point of view. For example, when Ed Skrein recently landed the “Hellboy” role of Major Ben Daimio, a Japanese American character, he received a tweetstorm asking him to step down and even cited the t-shirt, hoping he didn’t want his name added to it. A few days later, he backed out of the role with a very well-considered statement. His move gave me hope! As a result, I’m sure he’s going to have some Asian producers look for roles for him, and of course maybe other actors will reconsider as well.

David: You’re absolutely right, of course, and it’s the most privileged thing in the world to say, “Please don’t be mean to us, we’re just trying to learn!” In the immortal words of Nick Lowe, sometimes you’ve got to be cruel to be kind. Or, uh, forceful to incite progress. There are a lot of ways to do that, some more effective than others, but clearly the t-shirt did its job. Ditto that the backlash to “Ghost in the Shell,” “Death Note,” and for that matter “Memoirs of a Geisha” and a bunch of other movies in the recent past.

To wrap things up, do you feel that the problems with “Death Note” are categorically different/lesser than those with “Ghost in the Shell?” And even if so, does it even matter?

Hanh: Since there are so many other problems with the adaptation I don’t know if the race issue is bigger than if it were in “Ghost in the Shell,” which has a plot twist in there that is the ultimate in bad messaging when it comes to Asian representation. But in the end I don’t think it really matters to try to gauge the degree of how problematic something is rather than just pointing out that it is problematic. Furthermore, the response to the outcry is probably just as important. The dream is to have more Ed Skreins taking a stand and sending messages to producers. At the same time, I’d like if producers would at least acknowledge the importance of the dialogue instead of either making excuses or worse, rejecting the idea of there being a problem altogether.

“Death Note” is now available to stream on Netflix.