The Disney XD movie, which airs repeatedly over 24 hours on Saturday, is family-friendly viewing at its finest. 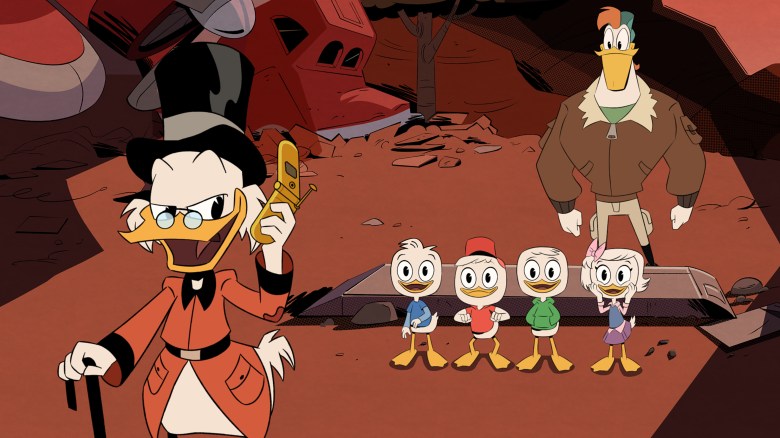 “DuckTales” makes its triumphant return to TV in a Disney XD movie, titled “Woo-Oo!,” on Saturday that sets the bar high during this age of reboots and revivals.

In the TV landscape filled with comic book adaptations featuring superheroes, zombies or spies, it’s easy to forget that the much-beloved “DuckTales” also hailed from ink and paper. It’s this source material, however, that gave the series its storytelling heft and visual vibrancy, an irresistible combination that has contributed to the original series’ success and nostalgic longevity. This was not some treacly, preachy after-school fare, but rather zippy escapism that built in serialized installments.

Fortunately, the reboot of the series keeps all of those important original hallmarks. “American Idol” alum Felicia Barton re-recorded the signature theme song but keeps its sense of fun and excitement intact. The animation inspired by Carl Barks’ original comic style is pleasing to the eye and elastic, giving the action a lively energy and bounce, while composer Dominic Lewis’ score is grand and cinematic befitting the “Indiana Jones”-esque adventures to be had.

Check out the new opening theme below:

Despite their two-dimensional design, these characters are by no means flat. The filthy rich Uncle Scrooge may seem like an irascible miser whose days of adventuring are long past, but after a run-in with a dragon his grandnephews have unleashed, he declares, “You kids are nothing but trouble. Curse me kilts have I missed trouble!” This personal awakening isn’t one-sided either. Through their adventures, our feathered friends slowly reveal more of themselves to each other, much like a family road trip forces kids to see their parents as people with abilities, not just nagging rule-enforcers. It’s this intergenerational focus that truly makes this the ultimate family-friendly series, where it’s acknowledged that kids may enjoy exploits away from authority, but if adults take part in the fun, the adventure can be richer. Plus, a surprise revelation in the movie’s final scene promises to unspool an intriguing family mystery throughout the season. Beyond its heartwarming family dynamics, “Ducktales” is just plain fun, thanks to its sense of derring-do. The movie packs in a slew of worldly artifacts such as the Medusa Gauntlet, creepy creatures, and outrageous obstacles such as suspension bridge riddled by booby trap-triggering laser beams all on a trek to find the Lost City of Atlantis. Colorful supporting characters with names such as Flintheart Glomgold and this critic’s personal favorite, Gabby McStabbersons, keep the series from taking itself too seriously.

And yes, “DuckTales” is seriously funny (as if Gabby McStabbersons wasn’t enough of a clue), mostly because of its irreverent and somewhat self-aware tone. The dialogue offers up zingers that refer to the ridiculousness of the over-the-top situations and occasionally lets kids sound like kids with lines such as, “No, get back. You’re old!” The movie also very cleverly points out that Scrooge’s three grandnephews are often indistinguishable personality-wise when he refers to them as “Huey, Louie… third one.” But by the end of the hour-long adventure, viewers and Scrooge himself will know at least which one Dewey is. While most of the cast do a creditable job, their voices aren’t that recognizable (which is good since that might be distracting). The one standout, however, is David Tennant, who can’t seem to hide his star power even if he is playing a cartoon duck with a disturbingly sexy Scottish burr. This is by no means a complaint, but merely an observation that fans of Tennant’s work in “Doctor Who,” “Broadchurch” and “Jessica Jones” may experience.

This one-hour movie is a smart reintroduction to Duckburg’s residents and the feathered flavor of the upcoming series, which will debut two new episodes on Sept. 23, the official 30-year anniversary of the Emmy-winning series. Viewers can also look forward to guest voices that include “Hamilton’s” Lin-Manuel Miranda, Allison Janney, Margo Martingale, Paul F. Tompkins, and Jim Rash, among others.

The “DuckTales” movie “Woo-Oo!” airs every hour over the course of 24 hours on Saturday, Aug. 12 beginning at midnight ET/PT on Disney XD.

This Article is related to: Television and tagged Disney XD, DuckTales, TV Review