"Fargo" once again racked up 10 craft Emmy nominations in Season 3, as showrunner Noah Hawley got more ambitious with a present-day parable. 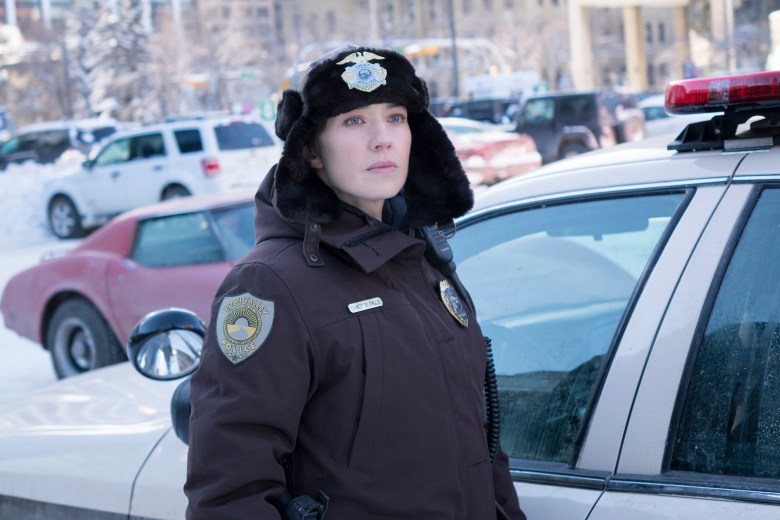 In Season 3 of the acclaimed “Fargo” FX anthology series, showrunner Noah Hawley continued to play by the Coen brothers’ rules, but got more ambitious and flexible with a present-day crime drama. It’s still about good and evil, only now in cordial Minnesota, with plenty of parables, strong women and weak men. Yet the result was more satisfying in its craftiness and empathy in trying to bring order out of chaos.

And for its efforts, “Fargo” grabbed another 10 craft nominations (cinematography, which it won last year, three for editing, hairstyling, makeup, music score, sound editing, which it also won last year, and mixing). The work seemed more confident and daring, as it focused on various character pairings. It was about mistaken identities, being at the wrong place at the wrong time, and lots of suffering.

As the murders mounted, however, so did the confusion. Sleazy businessman Varga (nominated David Thewlis) prayed on feuding brothers, Emmit and Ray (both played by nominated Ewan McGregor and a tour de force for makeup and hair), while pursued by unrelenting policewoman Gloria (nominated Carrie Coon). To Varga, the problem wasn’t too much evil in the world but too much good. Of course, it’s very biblical.

Getting “Inside Llewyn Davis”

So much of “Fargo” is rooted in the past and each season pays homage to a different Coen brothers movie. But for the first present-day story of the series, last year’s winning cinematographer, Dana Gonzales, riffed on the monochromatic  look of “Inside Llewyn Davis,” eliminating the blue completely, which made the reds and yellows pop. Like the eponymous folk singer from the Coen brothers movie, Gloria’s out of step with time (she’s a technophobe), and her life gets turned upside down personally and professionally. The look fits her perfectly. You really notice it in the day exteriors, and when she discovers her step-father’s corpse in the kitchen in the opener (“The Law of Vacant Places”).

Normally, Gonzales sticks to the Coen rule of no long lenses or roaming camera. They like classical compositions that don’t distract from the tension or whimsy between characters. But with so much pairing off in scenes (a plus for the three editing nominees), it seemed more natural to shift points of view with longer lenses. And, after shooting the more free-wheeling “Legion” with Hawley, Gonzales felt more liberated in moving the camera more, especially on big cranes in the opener.

“Peter and the Wolf” and “Aporia”

One of the cleverest conceits was introducing Sergei Prokofiev’s “Peter and the Wolf” as the primary parable. Billy Bob Thornton (who played hitman Lorne Malvo in Season 1) narrated the riff at the beginning of Episode 4 (“The Narrow Escape Problem”), in which everything starts going downhill for brothers Emmit and Ray. The characters were cast as the various animals (including Emmit as the bird/flute, Ray as the duck/oboe, Varga as the wolf/french horn, and Gloria as Peter/strings). and composer Jeff Russo adapted Prokofiev. Among other things, it foreshadowed the existential face-off between Gloria and Varga. However, Russo actually got nominated for the penultimate episode (“Aporia”), where he used a lot of Russian-sounding string music to complement the “Peter and the Wolf” vibe.

“Who Rules the Land of Denial?”

After winning last year, sound editing and mixing once again figured prominently. For the episode, “Who Rules the Land of Denial?,” in which Ray’s street wise girlfriend, Nikki (Mary Elizabeth Winstead), struggles to survive, we’re acutely aware of the sound.

It begins with the planning and execution of the prison bus crash, and we hear every detail, from the roar of the car engines to the welding of the metal piece used to upend the bus. Then we hear the loud, fiery crash outside, followed by the pandemonium inside, including the killing of the officers, the attempt to break through the bars to kill Nikki. But Nikki escapes with Mr. Wrench (Russell Harvard), a deaf assassin, who returns from Season 1. Together, they form a new alliance and race through the woods, where we hear the wind, the rustling of trees, and birds.

Then Nikki can’t help thinking about Emmit through a series of aural flashbacks. And, on top of that, the sound team use jarring percussive sounds to further underscore the disorientation.

Editorially, Curtis Thurber got nominated for “The Narrow Escape Problem.”  One standout occurs when Ray pretends to be Emmit to withdraw $10,000 from his bank account, which, of course, backfires. Ray has always been jealous of his successful brother, but can’t help portraying him as a mean-spirited caricature, which only confuses the situation. By contrast, at the end of the episode, Varga intrudes on Emmit at home to put the financial squeeze on him. After sweet talking at dinner, Varga takes over in Emmit’s office. He proclaims that Emmit faces imminent disaster because of his conspicuous consumption, whereas he’s an invisible capitalist who’s going to make him a billionaire.

Indeed, the reversals in “Fargo” can be deadly.

This Article is related to: Awards and tagged Emmys, Ewan McGregor, Fargo, Noah Hawley, Top of the Line