As the final pieces are put in place for another massive battle, the bigger danger might be those who still have their eyes fixed elsewhere. 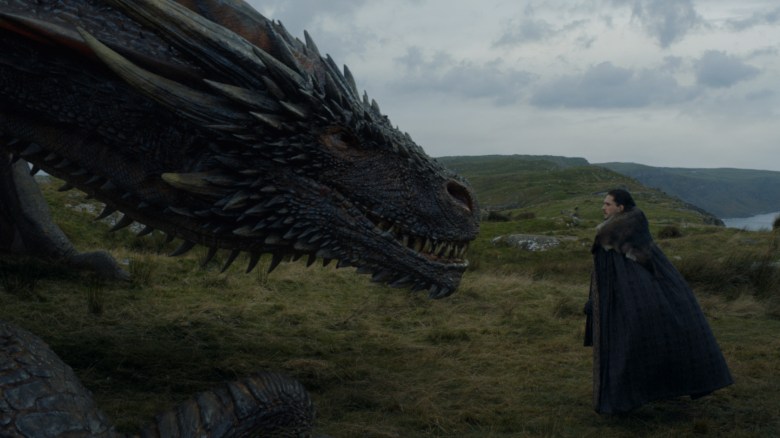 That scroll is one of a handful of surprises, including the long-awaited return of Gendry, whose mere survival is further proof that a distracted ruler can miss an easy target in plain sight. Gendry’s reintroduction showed that “Game of Thrones” doesn’t necessarily need to travel to new lands to reinforce our ideas of what this world holds. Even a simple Davos recon trip to fetch Robert Baratheon’s bastard son gives us a rare look at Flea Bottom. While most of this season’s palace intrigue has been spent in war rooms, speaking of armies as sheer numbers, it was a refreshing change to see the show move into the poorer parts of King’s Landing and spend a brief amount of time amidst the people charged with making weapons and armors for the wars to come.

Gendry’s reentry into the fold also helps to round out the north-of-the-wall team. However convenient or fortuitous that gathering of adventurers at Eastwatch proved to be, there’s something dramatically satisfying about the character gumbo that “Game of Thrones” has thrown together on the “bring back a White Walker to convince everyone we’re in serious trouble” expedition. Between Jorah (that guy can’t catch a break, can he?), Beric, and The Hound, Jon’s got his own “Ocean’s Eleven”-style collection of mercenaries to face off against this landscape-blanketing undead force.

Read More: ‘Game of Thrones’: Even If Fake, the Horse Violence in ‘The Spoils of War’ Was Too Hard to Watch

But even with a hammer-wielding bastard, and some crab Viagra, the biggest bombshell of “Eastwatch” is a manipulative masterstroke that even Littlefinger himself would be proud of: Say hi to the newest little Lannister!

Dany may be the Mother of Dragons, but this newest gestational shift in the Lannister family dynamic may be the biggest thing to throw a full-on unified human front against the White Walkers into disarray. Much like this episode draws connections between Dany and Cersei’s converging leadership styles, this seems like a thematic parallel that will come to dominate all the goings-on south of the wall, even as Jon and his not-so-merry band continue their quest beyond. Cersei’s pregnancy may have given Jaime a reason not to stray, but that new superseding sense of loyalty may end up having some disastrous consequences. That sweeping raven-eye footage surveying the area beyond The Wall might be the episode’s strongest indication that this war is taking place on a grand scale with some significant gaps in between. With these warring factions having their gaze fixed on key outposts and cities, they’re losing the idea that danger lurks in between the places we’ve returned to time and again. Even in the significant battles of Blackwater or even the aforementioned loot train bombardment, nothing has reached the scope of our latest glimpse at those White Walker armies.

Read More: Lena Headey is the Best Actor on ‘Game of Thrones,’ and Season 7 is Finally Proving It

It’s the enormity and severity of that situation that drives the suddenly fatherless Samwell from the confines of The Citadel. (Fingers crossed that’s not the last we’ll get to see of Archmaester Ebrose. But if it is, it’s been a delight spending a few episodes with Jim Broadbent, even if his character lacked the foresight of his pupil.) Sure, Gilly’s idle, scroll-reading invocation of Prince Rhaegar seemed like another neon signpost the show will return to before too long, but as Oldtown gets crossed off the map, it’ll be interesting to see what other reaches of Westeros take its place.

“We’re all on the same side,” Davos says before this vital group makes their way out to face a massive force. The sooner everyone else realizes that, the better chance they have at not having to bend the knee to an even icier foe.