A hammer-blow of a season ender had the same mix of devastating spectacle and forced machinations that peppered most of the previous six episodes. 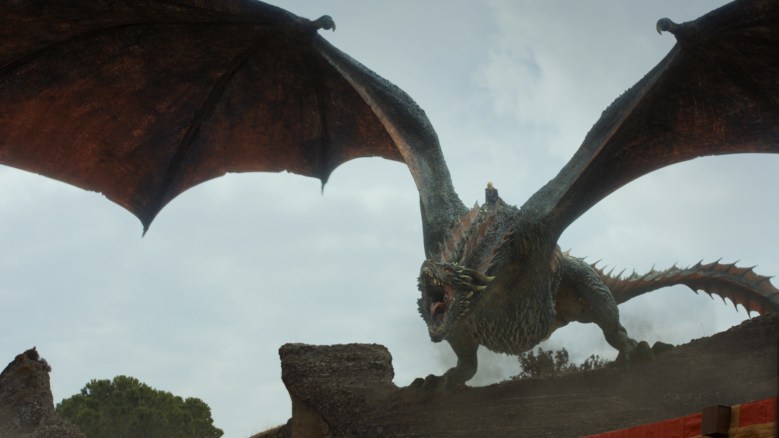 [Editor’s Note: The following review contains spoilers for “Game of Thrones” Season 7, Episode 7, “The Dragon and the Wolf.”]

At the King’s Landing version of Yalta, with feuding superpowers gathered to face a growing threat, Tyrion proclaims ”There is no conversation that will erase the last 50 years.” That certainly didn’t stop “Game of Thrones” from spending most of Season 7 endeavoring to rewrite the history books in fateful conversations: backroom deals, clifftop confrontations, even in words on a page recorded before some of these major players were even born.

Yet whenever Season 7 faltered, spun itself in circles trying to set up a fuzzy endgame, it turned to spectacle to deliver the figurative death blow, even if that wasn’t always literal. Billed as a meeting of the minds, writers David Benioff and D. B. Weiss delivered a batch of parting shots worthy of a season-long buildup. With interpersonal beats and world-shifting revelations, both were delivered with the force necessary to sustain this TV megalith. It’s a dramatic engine that doesn’t allow for small doses. Still, enough of these parting views of the Westerosi chessboard felt earned, sending this series off into its final offseason as a show worth returning to.

Read More: ‘Game of Thrones’ Review: Series-Altering ‘Beyond the Wall’ Is One of the Year’s Most Intense Horror Stories

Before those devastating farewell blows, the dragonpit gathering put into perspective some of the ways that this season has had to sacrifice some honest character moments in favor of some perfunctory story devices. In a microcosm of his involvement in the season overall, Euron hopped in at the start to mostly lackluster response. Daenerys continues a seasons-long quest to match her royal ambitions with royal actions, using her dragons as a grand entrance before sending them away, seemingly to spare the effects budget for later in the episode. Cleganebowl truthers got their own tiny tease, but of course the entire meeting slowed down to give them a stare-down before the rest of it commenced. That meeting didn’t come without a rare bit of patience on the show’s part, though. The tiny, thumb-twiddling prelude to Daenerys’ arrival was a rare moment of levity when needed. And The Hound’s hesitation after opening the wight cage (just like the pause before Viserion’s blue eye reveal at the end of “Beyond the Wall”) left just enough room for the possibility of it being a box suddenly bereft of bones. What came charging out of the box seemed enough to turn the key straggling Lannisters onto a path of unity, until Jon had the temerity to avoid lying.

Jon’s surprise declaration of allegiance is not only curious in that it draws Cersei’s ire, but shows how effective “Game of Thrones” has been in setting up a world where trying to uphold honor and truth seems quaint. The army of the dead has leveled all sense of decorum, history and valor. More than ever, the series’ focus on survival is a bit of a permanent change until the enemy is vanquished. Sometimes that all-consuming narrative drive leads to wonderful moments like Beric’s season-defining speech on the nature of life and death. But in others, it rips the logic and emotional power from Cersei’s walkout, one that happens mere minutes after she declares the fight against the Night’s King to be of paramount importance.

Read More: ‘Game of Thrones’: The Next Roles for the Cast During the Wait for Season 8

IndieWire’s Ben Travers wrote an effective explanation of what the show has lost by sparing most (if not all, depending on your emotional attachment to fire-breathing winged creatures) of the season’s major characters. What it did for this finale was place a giant hammer over every solitary interaction, whether in Sansa and Littlefinger’s counseling session, any of the Lannister sibling drama or even in Jon’s pep talk to Theon. Beric and Tormund’s fate is to be determined, but the series didn’t need to lop off too many folks from the cast list to show that this world is dangerous. (Farewell Eastwatch, it was fun having you in the opening credits sequence while it lasted.)

Even if some of these season arcs arrived at their endpoint through needless, labyrinthine subterfuge, there’s no denying the mortal tension at the heart of each of those isolated moments. This giant, cataclysmic threat on the horizon has made everyone’s motivations malleable, rather than strengthened their resolve.

Up next: Those crazy Lannister kids, a bloody end at Winterfell and our grade for the finale.

Page 1 of 2
Continue Reading: ‘Game of Thrones’ Review: Finale ‘The Dragon and the Wolf’ is Everything That’s Terrific and Frustrating About Season 7