Virtual reality creators from this year's Fantasia Film Festival talk about how powerful a tool 360 VR can be for action and horror filmmakers. 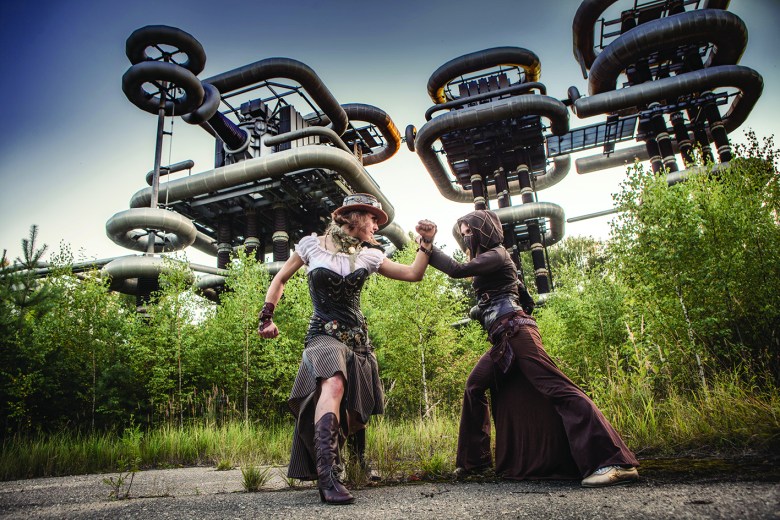 Genre fans and filmmakers once again this summer flocked to Montreal for the Fantasia Film Festival, which has established itself as a premiere platform for discovering exciting and out-of-the-box genre films. However, this year’s though festival-goers weren’t only seeing cutting-edge works in packed theaters, but lining up to experience one of the festivals two pop-up VR arcades.

“It was an eclectic VR selection ranging from animation to horror, and from science fiction to poetic experimental experiences” said Marc Lamothe, the festival’s co-Director. “The response from both the regular public and industry attendees was absolutely overwhelming.” VR at The Fantasia Film Festival

VR at The Fantasia Film Festival

Like all filmmakers, genre creators are having to learn a completely different visual language.

“While traditional film has a lot of obvious advantages over VR – like a framed picture, cinematic editing, close-up shots – the most fundamental difference between the two media lies in creating the feeling of being inside the story,” said director Nick Malukhin.

Malukhin’s action driven VR series “Immersive Combat,” which played at Fantasia, takes advantage of medium by having his audience feel the sensation of flying over battleships in the open sea and witness the action unfold with stunts performed by world champions in Kung Fu, Muay Thai and Medieval Combat.

“With VR, you are no longer passively watching a movie. Instead you feel as being part of the story; its a mixture of film, game and a roller coaster ride,” said Norris. “I’m absolutely convinced that the younger generation will be choosing cinematic VR because it is such a powerful experience.”

For writer-director Harrison Norris, who had three different VR experiences at the festival – which ranged from action to horror – the fantastical and exaggerated realities of genre benefits from the fact that the audience is removed from their present reality. In particular, he likes the idea that no one with a VR headset can check their phone while watching “The Peeler,” his first-person horror experience in which the viewer is strapped to a hospital gurney in a murderous psychopath’s warehouse.

“Replacing a simple rectangular window to a world, with the ability to directly surround the viewer with the events of the narrative, if done correctly, has a profound psychological effect,” said Norris. “Even if we’re viewing the events of a story as an omnipotent force — as opposed to an active participant in the story – we as a viewer are always present. We can never be entirely removed, or separated from events.” That ability to immerse an audience in your creation is extremely powerful for VR creators, especially those trying to scare or thrill a viewer. It’s something writer-director Rose Troche thinks artists need to carefully consider and not approach purely as another tool to be used.

“VR tells us so much about ourselves and the choices we make inside the private experience of viewing,” said Troche. “Because of its privacy and immediacy, this medium is powerful. Genres are strengthened in this space – horror, fantasy, sci-fi – and because of that, we as makers need to handle our material with a greater amount of responsibility. I personally lean toward hopefulness, toward humanity.”

Troche believes it’s an enormous mistake to take story ideas and scripts that were conceived for traditional 2D movies and try to adapt them for VR. For her Fantasia VR experience, “If Not Love” – which imagines a terror attack in which the dead and wounded rise up – the idea started with an image of bodies falling on dance floor, followed by blood reversing back into bodies.

Anthony Batt, co-founder of the VR studio Wevr, thinks creators can’t be thinking about virtual reality in terms of narrative and pushes back at the conversation revolving around how movies are moving toward VR. He explain how the two pieces Wevr brought to Fantasia, “Apex” and “Waves,” were more art than narrative.

“[‘Apex’ and ‘Waves’] have distinctly dreamlike qualities, using visual imagery and audio to create unique realities,” said Blatt. “The immersive quality of VR allows the audience to move from being an observer to a kind of a participant. And we think the idea of being inside an artistic vision is compelling and powerful.” For “Apex,” musician and VR director Arjan van Meerten was trying to create a specific feeling of a memory from when he was a teenage. In his unique and surreal 360 music video the audience is brought into a a fiery urban apocalypse populated by skeletal ghost animals, abstract shapes and maniacal smiling giants.

“With this project I wanted to make the viewer experience something similar that I had when I was younger and went to metal concerts,” wrote van Meerten. “The energy of these concerts and the feeling of being overwhelmed is something that left a big impression on me when I was that young.”

Ted Geoghegan — who does double-duty as Fantasia’s director of communications and directing films himself — knows that there are Fantasia traditionalists who were wary of the new technology at first, but he sees the popularity of this year’s VR showcase as a sign that genre fans and filmmakers are always open to try something new.

“While some genre fans will always prefer the passive enjoyment of cinema-going,” he said, “more and more consumers are thrilled about the prospect of truly interactive art.”

This Article is related to: Toolkit and tagged Film Festival Spotlight, Virtual Reality