The Safdie brothers spent a decade as American cinema's best-kept secret. With "Good Time," they're ready for their closeup. 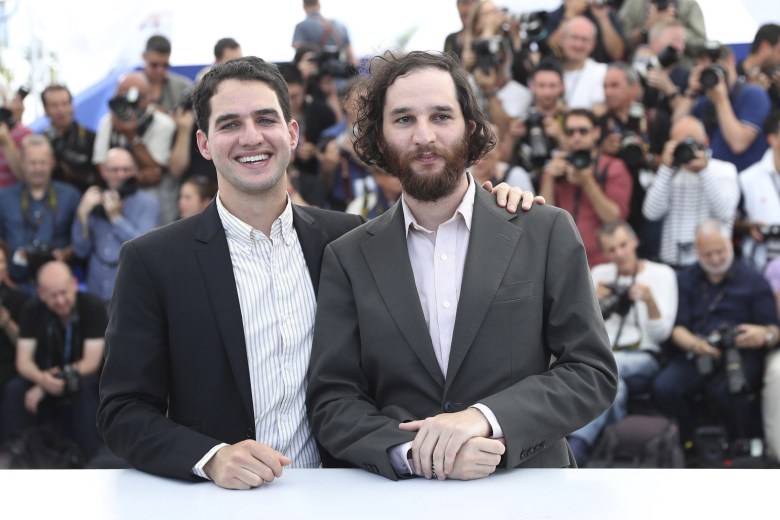 Benny and Josh Safdie at the 2017 Cannes Film Festival

In the aftermath of “Daddy Longlegs,” the brothers directed the documentary “Lenny Cooke,” an innovative portrait of the fallen basketball star that takes a sharp turn into tragedy and magical realism in its closing act. The project was less non-fiction chronicle than another seriocomic portrait of self-destruction, but it wasn’t a festival breakout so much as a tangent that appealed to sports fans.

In the meantime, ICM failed to bring any new projects their way, so the Safdies decided to launch their own production company, dissolving the Red Bucket Films collective they’d launched out of college. “It was very idealistic,” said Josh, “this idea that we’re all gonna make stuff and support each other. I ran the finances of it and was like, ‘Jeez, all this money’s coming in to do commercials we don’t even want to do.’” (Much of the Red Bucket output now lives on Vimeo.)

Lacking other offers, the Safdies kept themselves busy directing short films. The 20-minute “The Black Balloon” (above) is an astonishing riff on “The Red Balloon,” in which the anthropomorphized object wanders through a naturalistic cityscape as if it were a Disney character adrift in Cassavetes’ oeuvre. Eventually, the brothers landed financing from France for another feature, the jarring heroin drama “Heaven Knows What.” It played to raves on the fall festival circuit in 2013, and shocked audiences with its intensity. The Safdies adapted the unsettling thriller from the experiences of their star, 19-year-old Arielle Holmes, whom they discovered on the streets; they paired her with Caleb Landry Jones, the first known actor to appear in one of their projects. It also demonstrated the robust team of collaborators they developed over the years. Bronstein, their “Daddy Longlegs” star, co-wrote and edited the project with Josh; the roving camerawork owed much to their long-time cinematographer Sean Price Williams. For Bronstein — who directed the decisively non-commercial “Frownload” in 2008 — the project represented a shift toward grander narrative strategies. “Things were getting more extreme, more conceptual,” he said. “We were moving away from the worm’s-eye approach, with less of a composite of behaviors and more story. But we’re still making these character studies dismantling the notion of audience identification by writing dislikable people.”

While the movie was more funereal than anything else they’d made, it illustrated tremendous cinematic ambition as well as the ability to pull it off. Still, they struggled to gain traction with “Uncut Gems” — and then, shortly before “Heaven Knows What” hit theaters, they received an email from Robert Pattinson. The “Twilight” star was a fan (sparked, as he’s said repeatedly, by a Safdie film still he saw on IndieWire), and his interest in a collaboration motivated the brothers to write “Good Time” as a vehicle for him. In the process, they switched to his agency, WME, and brought him into their world.

For the role of Connie, the scowling bank-robber keen on aiding his mentally disabled brother (Benny Safdie), the brothers sought to reinvent the image of their famous star. “We wanted to street-cast Rob,” Josh said. They brought him to locations around Queens, where the movie was set, and Benny traded emails with him in character. They shot the movie in real locations around the borough with the same fast-and-loose techniques of their earlier works.

Pattinson was astonished by the rapid-fire pace. “There was intensity on every part of the set,” he said during a Q&A on opening weekend. “They’re all such big personalities. We had no time. I’ve never experienced anything like it.” He positioned his interest in the brothers as a form of advocacy. “Everybody’s trying to do huge movies,” he said. “You can see them everywhere, but very few people can get things like this to multiple screens, and that’s important to me.”

Bronstein, who stays out of the spotlight now surrounding the brothers, said Pattinson’s involvement forced their creative process to evolve. “This was the first project I worked on that was catalyzed not just by inspiration but opportunity,” he said. “Rob’s appearance ensured a budget to make something. Our operative struggle hasn’t really been a commercial one. We haven’t been actively seeking to do anything other than paying our rent. That has mutated in an uncompromising direction, as self-glorying as that sounds.”

Needless to say, the attention to “Good Time” radically changed the perception of the Safdies’ potential. By working within the confines of a familiar genre, the movie quickly found fans in the studio system. At Cannes, the brothers found themselves on the receiving end of praise from Paramount Pictures president Jim Gianopolous, and they later received an appreciative note from super-producer Jerry Bruckheimer. “He called it a thrill ride!” Josh said, still reeling from the praise. The brothers claim they never contemplated this level of attention, and still show no obvious interest in projects they haven’t originated themselves, but try to keep an open mind about it. “If you shut yourself off completely and aren’t open to those kinds of conversations, you’re not gonna learn anything,” said Benny. “And we want to learn.”

At the same time, they’re not waiting for big opportunities. The Safdies are currently producing a number of new projects they’ve yet to announce, including Bronstein’s long-delayed followup to “Frownland,” and another that Josh described as “‘Kill Bill’ meets ‘Get Out.’”

They’re at once charming and a bit cocky about the newfound attention. “We have nothing to lose, so we have nothing to prove to anyone,” said Josh. “If we can’t figure out a way to a movie at a studio, fine. Who cares? We’ll go out and make it our own way. We know how to do these things.”

The brothers’ chemistry hasn’t changed much over the years. Josh yammers on about his writing process, regularly interrupting Benny, whose understated nature belies his skills as a performer. (He holds his own onscreen opposite Pattinson in “Good Time,” and in their early creative years, created his own Andy Kaufman-inspired experimental standup routine.) Even as the pair demonstrate their emerging confidence, they’re prone to veering off on tangents, lost in a million ideas at once, and all too eager to finish each other’s thoughts.

“Independence is a state of mind,” said Benny, when pressed on whether they would take a studio gig. “It isn’t about the money. If you’re given the million —”

Josh interrupted. “You can make a $200 million independent film,” he said. “Listen, I’m hoping that Hollywood starts to kind of regress in its model a little bit back to when it was more niche-oriented and they were trying to chase, maybe, 50 movies a year that made $20 million —“

Benny: “Versus two movies that make $1 billion. You look at people who have one movie that makes like $200 million and it fails, and it’s like the whole business could collapse. It’s not a good model! Nothing is a home run, you know? Nothing is 100 percent quantifiable.”

Josh again: “Everything could fall apart tomorrow, and we’ll be exactly where we want to be.” Finally, they’ve found support to make “Uncut Gems,” with support from “Good Time” producer A24 and executive producer Martin Scorsese. Much the film community is watching their progress with admiration. “What I love about Josh and Ben Safdie is that they love cinema and it shines through in their work,” said Sean Baker, whose “Tangerine” and “The Florida Project” also reflect an interest in naturalistic American stories with unconventional characters. “Good Time,” said Baker, “falls perfectly in the Safdie canon. It is distinctly Safdie — beautifully lost characters brought to us with Koch-era attitude and hubris.”

They’re still processing the sensitive climate that comes with a wider audience. “What’s so weird to me is that you can’t have a conversation about difficult things unless you bring them up and show them for what they are,” said Benny. Josh jumped in. “I hope people don’t say, ‘These people are fucked up for making this movie,’” he said. “I hope they’re like, ‘It’s the world that’s fucked up.’ Because it’s true.”

In any case, their ambition hasn’t slowed. “We’ve been incubating all these ideas, and now we feel like we have a grasp on how to tell these stories,” Josh said. “I think we can do better than ‘Good Time.’” He paused, then clarified: “I know we can do better.”