If time is a flat circle, the characters of "Halt and Catch Fire" aim to burn steady on an endless loop. The show, well, it's already there. 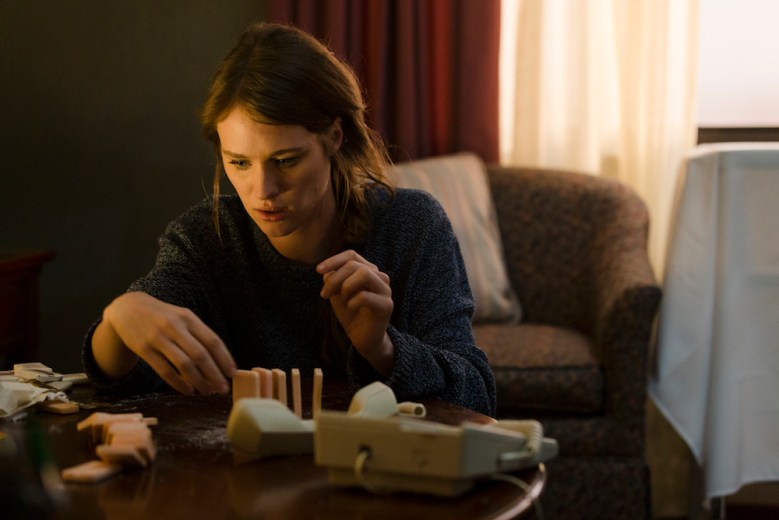 So much has changed in “Halt and Catch Fire.” The future comes rushing at the series’ four protagonists faster than anyone expected. Flying four years in the blink of an edit, creators Christopher Cantwell and Christopher C. Rogers shut down Mutiny — Cameron (Mackenzie Davis) and Donna’s (Kerry Bishe) start-up gaming company — divorce Donna and Gordon (Scoot McNairy), and send Joe (Lee Pace), the idea man, into a mundane consulting gig.

But you already know that.

The time jump near the end of Season 3 marked a major step forward (literally and figuratively) in how this intimate, human story is told. While the jump is noteworthy, time is the key: Whether Cameron, Donna, Joe, and Gordon are getting ahead, such as a jump on the competition with a new piece of tech, or falling behind — losing moments they can never get back with their husband, wife, kids, or friends — the characters in “Halt and Catch Fire” are working against an unstoppable force. And starting with that time jump, Cantwell and Rogers cracked an impossible code.

Entering the final season, the AMC drama is running with the precision of swiss quartz. Moving rapidly without episodes ever feeling rushed, the pacing has reached a prime speed that somehow negotiates the series’ figuratively contradictory title. Of course, “Halt and Catch Fire” isn’t meant to be taken literally in title or application. Its title, explained in the pilot, is drawn from a prompt that sent a computer’s hard drive into “race condition,” where various parts began competing for control, leaving nothing and no one in command. We’ve been watching them scramble ever since Joe struck HCF in the pilot, but, applied to reality, both can be done at once: You can stop and move forward all at once. Those who blaze through life may miss its best parts, and these four have been burning the candle at both ends. Those consequences started to become clear with the time jump in Season 3, but they become ever more apparent in Season 4, as the series hones in on a group whose internal hard drives tell them to keep going, no matter what.

By the Season 3 finale, Cameron was decrying the promise of the future as a lie — “another crappy version of the present.” But Joe summed up the brilliance of what “Halt and Catch Fire” has become by accepting her premise and arguing against it: “The future can be different.” There’s hope there, and hope may feel like a lie, but it’s indisputably present once you let it in. These characters are addicted to dreaming, hoping, and aspiring to whatever’s next, and the series’ creative team has found increasingly impressive thematic ties to illustrate the danger and power of this lifestyle.

An artful sequence opens Season 4, capturing the necessary information from three years of struggle and none of the extraneous weight. Donna is as powerful and calculated a business leader as she was a submissive and accommodating secretary, oh so many years ago. Joe and Gordon are done with trivial bickering. They’ve been there, and they’re better men for it.

Romance, friendships, children, and parents are all torn asunder in the quest. Each character sees what their addictions cost them, but they also see what’s gained and what could be gained. “Halt and Catch Fire” captures this pull with surprising stillness. So many scenes are just one or two people in a room. Often, they’re talking, but sometimes they’re just thinking. So much of the show exists in their minds, and the writers are incredibly patient while drawing it out. Time is just a construct, distracting each dreamer, but never changing their drive.

It’s Cameron, though, who remains the most fascinating conundrum. Mackenzie Davis’ rebel-without-a-cause programmer has become an authoritative disrupter. Her video games buck the trends, confidently building a vision sometimes only Cameron can see. The lingering question, both for the audience and for Cameron, is whether her aggressive decision-making is the sagacity of a visionary in her field or the frustrated immaturity of a young person who’s still trying to figure out life. Davis makes the discernment razor thin. Pensive moments of self-reflection and sudden inspiration are difficult to pull off (despite how easy the entire cast consistently makes them look), and Davis gives Cameron volatility that lends to great expression. Her eyes glisten with pain or excitement, similarly, but contextually acute. A lengthy arc in Episode 2 finds Cameron on the phone. Aided by strong dialogue built on the backs of every episode prior, Davis deserves accolades for building her half of a two-way conversation all alone in her hotel room. Her range, without ever pushing, is remarkable.

But for as much as “Halt and Catch Fire” invites you to live with these people and be content doing so, the use of time demands acknowledgement of the end. Whether it’s the always looming black figure of death or merely the final episode of the series, an end is approaching, and “Halt” knows it. The time jumps make it clear the creators are aware they’re short on time, and they want to get to the good stuff; the heart of the matter.

Sometimes that’s conveyed through people like Bos, the fan-favorite fifth wheel (played oh so perfectly by Toby Huss), who becomes all the more aware of his legacy and imparts as much to his younger friends. Other instances are built on reflection, as mistakes of the past plague decisions for the future. But more than focusing on what’s left behind, the final season seems intent on presenting these characters as prepared. Their growth over four short seasons is immeasurable, and now is the time to take it all in; to accept the lessons and apply them, before it’s too late.

Viewers would be advised to do the same. Your future will be improved by making this your present.

This Article is related to: Television and tagged Halt and Catch Fire, TV Reviews