23 countries, 2,000 crew members an epic portrait of mass migration that understands how a lack of empathy often stems from a failure of imagination. 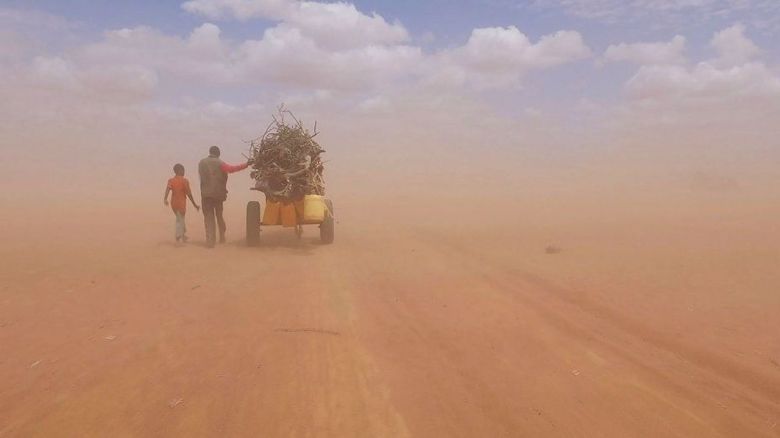 There are any number of unforgettable images in Ai Weiwei’s “Human Flow,” the most necessary and comprehensive documentary to date about our planet’s current refugee crisis, but the most indelible of them all is borrowed from a movie about a very different humanitarian failure. For 1956’s “Night and Fog,” Alain Resnais ventured into the haunted ruins of concentration camps Auschwitz and Majdanek, training his camera on the evidence that had been left behind. A still ocean of women’s hair. A mountain of empty shoes, spilling through the rooms of a building like a flood. Symbols that convey the scale of apathy and death better than bodies ever could, because the horror of bodies is too all-consuming to allow for any deeper understanding.

In “Human Flow,” the film’s famous artist-director shoots a massive heap of abandoned lifejackets from above, the camera lifting into the sky to reveal hundreds (or thousands) of the vests piled on top of each other like an endless orange sea. It’s the kind of moment that epitomizes why this is one of the few documentaries to use drone cinematography in a way that doesn’t smack of vanity. It’s also a moment that’s even more powerful for anyone familiar with Ai’s “Law of the Journey” installation, for which he wrapped a Berlin concert hall in the litter of a 21st century migration — here, he found his materials in the real world. We understand that every one of those lifejackets has a story to tell, a visceral realization that’s more effective than actually hearing them all.

This is the beauty of Ai’s film, an open-hearted and intricately woven mosaic that travels to 23 different countries (thanks to more than 2,000 crew members) in order to show both the breadth of the refugee crisis as well as its dehumanizing volume. Eschewing the close-up approach of Gianfranco Rosi’s “Fire at Sea” or the urgent didacticism of Vanessa Redgrave’s “Sea Sorrow,” “Human Flow” is an epic portrait of mass migration that understands how a lack of empathy often stems from a failure of imagination.

Sometimes, the sheer scope of an atrocity proves too overwhelming for people to comprehend, and so they default to willful obliviousness, that passive evil to which so many of us are predisposed. Whether it’s the sprawling sierra of life jackets or the burning oil fields of Iraq that ISIS lit aflame as they made their retreat, or any of the myriad other sights that sustain Ai’s largest project for more than 140 minutes, the film combats indifference by articulating the dangers of allowing a problem to eclipse the people that are suffering from it.

And, a few evocative flourishes notwithstanding, people are front and center, here. Ai Weiwei most of all. After being detained and arrested in his native China, the high-profile artist has been making the most of his newfound freedom, traveling the world and engaging directly with the issues that have always sparked his work from afar. Ai is hands-on from the very beginning of “Human Flow,” wading into the waters off the coast of Lesbos and pulling a refugee out of the ocean with one hand as he shoots footage on his iPhone with the other. It would be easier to accuse Ai of grandstanding if he weren’t such a gregarious character; a jolly man who likes to mumble and is quick to laugh, Ai cuts a humble, welcoming figure. More than that, his presence serves a unifying purpose as the film argues that the world is only as big as it is small, a massive place that’s shrinking every day — self-serving or not, there’s a power to seeing the same man engage with refugee populations in places as disparate as Egypt and Mexico. And not just any man, but a refugee himself (albeit a rich one). “Human Flow” never references its director’s previous accomplishments, but watching someone of his stature interview a group of carefree girls in Gaza — watching the son of a man who was exiled by Mao Zedong interview the Princess of Jordan — reinforces the idea that the arbitrary borders of the old world need to be redrawn for the new one.

Walls aren’t just inhumane, they’re embarrassingly obsolete (to that end, some of the most interesting moments in the movie involve refugee sharing YouTube videos and finding their own ways to circumvent the barriers that have been placed before them). Civilization isn’t as static as people like to imagine. And even when the various refugee camps blend together and it feels like Ai’s film has become paralyzed by the banality of its central crisis, we’re struck by the raw evidence of the fact that that the world is shrinking, populations are being displaced, and people from different backgrounds are going to have to learn to live with each other. There’s no other option. Prepare accordingly. Suck it up. Figure out a sustainable immigration policy, because not having one isn’t going to work.

The longer “Human Flow” goes on, the less political it becomes. Ai doesn’t devote much time to interviews, but a quote from one of his subjects hangs in the air above every scene: “Being a refugee is much more than a political status. It’s the most pervasive kind of cruelty that can be exercised against a human being. You are forcibly robbing this human being of all aspects that would make this human life not just tolerable, but meaningful in many ways.” The longer we stare at people shivering in a camp on the outskirts of France, or trudging through the marshes along the Hungarian border, or waiting in a tent city as food runs low and the trains rumble by, the more we come to appreciate Ai’s scattershot structure, which bops between countries as if at random rather than following the frozen stream of refugees from one country to another. These people are living without context, which means they aren’t really living at all.

The fact that Ai chooses to focus on this profound sense of absence is what allows “Human Flow” to become more than the sum of its parts, more than just the most expansive infomercial ever made. Rather than isolating particularly compelling refugees and force-feeding us their backstories as if they were very special contestants on “American Idol,” Ai stresses their sameness. Rather than articulating humanity, Ai traces the shadow of inhumanity. He doesn’t ignore the fleeting moments of joy that might be found in a refugee camp, but he dwells on the boredom that defines the experience, even though he knows he could never hope to fully convey it (a fact that the film is just dull enough to underline).

Cinema may be a machine designed to produce empathy, but this is the rare film that reckons with how hard it can be to sustain it. It doesn’t point viewers towards a website or guilt them into action. On the contrary, this mammoth, misshapen bird’s-eye view of the modern world simply tries to broaden your vision by ironing out the details, to help you see that denying someone else’s humanity is effectively denying your own.

“Human Flow” premiered at the Venice Film Festival. It will open in theaters on October 13.