One of the best scenes in the Marvel mega-crossover was two superheroes using their words instead of fists. 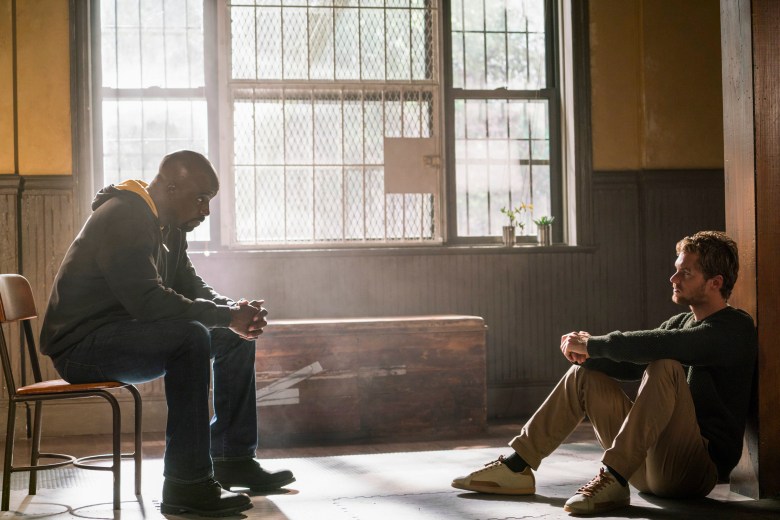 While “The Defenders” takes its time in delivering on a promised team-up of Netflix’s Marvel heroes, it doesn’t shy away from acknowledging just how different those heroes are. That’s especially true of Luke Cage (Mike Colter) and Danny Rand/Iron Fist (Finn Jones), a street-wise black man fresh out of prison and a kung-fu expert who also happens to be a young white billionaire.

This leads to one of the stand-out moments of the season — one that involves no kung-fu. Instead, Luke and Danny have a real moment about the real world — a scene that both Colter and Jones were excited about.

“It was great,” Colter said about the scene to IndieWire. ” A lot of times when we see good material, it’s refreshing because this is what we’re here for. As actors, we want something to do. We want something to play. That’s why we got into this business.”

In Episode 2, Danny Rand and Luke Cage encounter each other for the first time in the alleyway outside a murder scene, fighting it out as Luke aims to protect a kid from his neighborhood who has gotten tangled up in this massive conspiracy. But their first real conversation happens during Episode 3 in Colleen Wing’s (Jessica Henwick) dojo, after Colleen and nurse Claire (Rosario Dawson) convince them to speak.

And that conversation, much like their previous encounter, includes a few body blows, as Luke proceeds to point out that while both he and Danny have superpowers, Danny has a whole different level of power working for him.

“I’m not some billionaire white boy who takes justice into his own hands and slams a black kid into a wall over his personal vendetta,” Luke snaps at one point, just one element of the intense discussion over race, class, and how they impact a person’s power in society.

According to showrunner Marco Ramirez, there was an inevitability of this scene occurring in “The Defenders.” “It always felt like the most organic thing,” he said, “that Luke Cage would say if he ever encountered a Danny Rand in the world, is ultimately, “When I came upon you, your entitled ass was doing some specific things that I’m not cool with.'” And that’s what made it special to everyone involved. “I really think it also helps understand the optics — it helps us understand the dynamics of how these characters are going to interact for the rest of the season,” Ramirez said.

That level of understanding means even more to comic book fans who are aware that on the page, Iron Fist and Luke Cage eventually team up as a duo. While that may or may not ever happen on screen, their relationship is one that has precedent, and needs a basis in reality.

“One of the great things about how Marco wrote that scene, and it’s one of the first scenes that we have together, is it completely grounds the characters in reality,” Jones said. “It’s not just a superhero buddy team-up, straight away. They come from very different places and they have very different perspectives. Danny does come from a world of privilege, but he doesn’t even really understand what that even means. He’s been blind to his own privilege through a kind of naivety of being away from the world for a long time.”

Plus, according to Colter, the scene pinpointed current trends currently happening today. “I felt like Marco had a finger on the pulse of some of the things that were bothering people and would play out if a billionaire playboy like Danny Rand and someone from the streets from a blue collar background like Luke Cage [met up],” he said. “It made sense that they would have this sort of disdain for each other, because from different walks of life, one person is oblivious to certain things, another person’s all to familiar with the system and how things work.”

Danny Rand’s blindness to real world issues may be due to the fact that he spent the previous 15 years studying kung fu quite far away from New York City. “Luke’s definitely not the first black person that Danny’s come into contact with, but I definitely think it’s the first different point-of-view that he’s had about his power,” Jones said. “In ‘Iron Fist,’ he’s surrounded by people of power, but they’re all from one side of the argument, and this is the first time he’s met someone from the other side of the argument.”

Ultimately, the scene was an essential one for both characters, as well as the show itself. “Those kinds of things do make for good drama and that’s why people watch,” Colter said. “They want to see drama. They want to see things play out. They want to see people in conflicts. That’s what we’re doing.”

“Marvel’s The Defenders” is streaming now on Netflix.

This Article is related to: Television and tagged Finn Jones, Marvel's The Defenders, Mike Colter