Brendan Gleeson and Mary-Louise Parker star in a Stephen King adaptation that doesn't convey as much as it could. 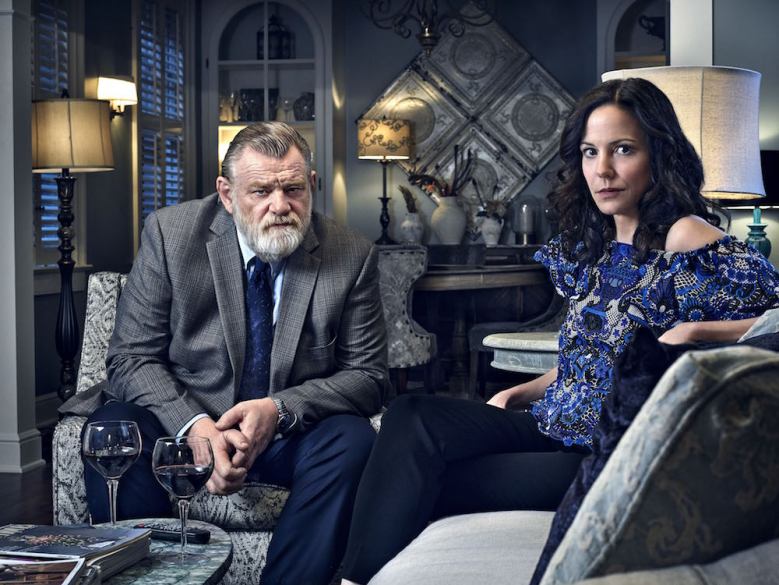 “Mr. Mercedes” opens with a scene as telling to the series’ successes as its failures. Inspired by an actual tragedy — when a woman drove her car into a crowd of people at a McDonalds’ job fair — the new Audience Network drama recreates the crime in gruesome detail.

Though not outside the fast food chain and with more mysterious intent than the aforementioned event, a man in a clown mask sits behind the wheel of a Mercedes sedan. He pulls up to a line of people, who are waiting to meet potential employers during the fiscally-tumultuous times of 2009. Sitting idle long enough to draw attention from the sleepy crowd, including a mother with her baby and a kind man with a tightly-wrapped sleeping bag, the driver suddenly shifts into gear and speeds through the screaming bystanders.

As described, this is a deeply disturbing event. As captured, it’s nauseating. In the era of “too much TV,” the need to make a resounding first impression is understandable, but “Mr. Mercedes” treats the inciting incident of its cat-and-mouse detective story as a horror show. Such a choice makes some sense when considering the series is adapted from Stephen King’s novel, but less so when realizing it’s not that kind of Stephen King story.

King, while best known for fright-fests like “The Shining,” “Carrie,” “It,” and “Cujo,” doesn’t strictly adhere to any one genre, and his 2014 novel, “Mr. Mercedes,” is much more of a crime story and character study. The first in a trilogy tracking retired police detective Bill Hodges, the book was a first for King. It broke precedent and served as yet another reminder of the writer’s impressive versatility. The show feels structurally similar to other TV tales tracking cops and criminals, aside from those alarming factors. In four episodes given to critics, the fourth carries quite a bit of promise while the preceding three all but bury an intriguing yarn under a mountain of blunt force trauma.

(Extended side note: Call it the bias of a lifelong Dennis Lehane fan, but I do not think it’s a coincidence the best, most powerful episode of “Mr. Mercedes” is the one written by an experienced mystery novelist. Lehane has spent time in writing rooms for “The Wire,” the second season of “Bloodline,” and “Boardwalk Empire”: He knows his way around a character-driven mystery, be it in book-form or as a screenplay, and his handling of this tricky material exhibits the deft touch needed to make it work.)

“Mr. Mercedes” specifically tracks Hodges’ (Brendan Gleeson) pursuit of the killer from the series’ opening moments. Flashing forward after the accident to his retirement, the case opened from that vehicular homicide remains unsolved, but who was behind the clown mask is not a mystery to the audience. Harry Treadaway (“Penny Dreadful”) plays Brady Hartsfeld, a full-time IT repairman who makes house calls when he’s not stocking shelves at an electronics store.

Hartsfeld’s employment status is a focus, supporting the series’ ongoing theme of simmering frustration within the American working class. His boss is a stereotypically corporate: Power-hungry (and slightly mad), he cites “the customer is always right” like a mantra, refutes his employees’ complaints sight-unseen and is generally dim compared to those working for him. He’s an easy boss to hate, and, in the right hands, this kind of maddening figure combined with the trying time period and a damaged figure like Hartsfield could be a frightening, compelling allegory for how many Americans still feel. Audiences could relate to Hartsfield as he suffers beneath The Man’s iron will and then be terrified by seeing themselves in a psychotic killer.

But that motivation must have been deemed too complex to exist on its own, and Hartsfield is given a darker, nastier backstory to motivate his actions. Yet an unintended side effect is his utter alienation. Yes, viewers come to understand him — through familiar serial killer character motivation — but they don’t empathize with him. His introduction and subsequent grizzly actions ruin any chance the audience has to identify with Hartsfield as an Average Joe American. If he had simply snapped from all the pressures surrounding the blue collar men and women of this era, the series’ emblematic elements could’ve popped. The series overall could have meant more than what it does.

While “Mr. Mercedes” exhibits signs of improvement — the series’ resonance strengthens once Mary-Louise Parker (finally) shows up — the drama comes off as an unappealing combination of Stephen King’s most ghastly horror moments mashed into a hard-boiled detective story. It doesn’t earn its violence, even with a game cast and compelling ideas. A subdued fourth episode indicates “Mr. Mercedes” could develop into an exciting race, but its zero-to-60 attempt to grab attention backfires.