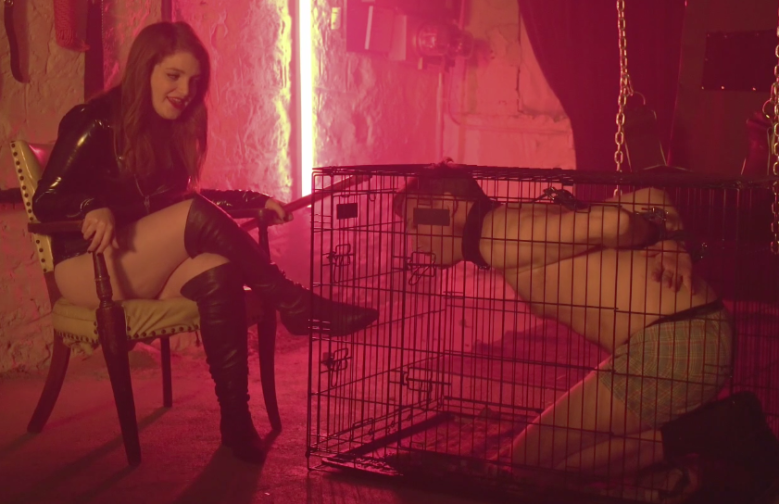 The idea began percolating for Jaffe around the time that “Fifty Shades” started taking off. “It was so self-serious and dour,” she said. “There was clearly an appetite for stories about kink, but I found it really strange that the topic gets approached with this really heavy hand. Human sexuality is so expansive and funny, and when it’s good, it’s really fun.”

Jaffe plays the main character, Ivy, who runs a mom and pop dungeon in her small town of Mapleton, New York. She has a steady flow of satisfied customers who submit to her whims, including the particulars of her OCD and fear of germs. Jaffe wanted Ivy to be sexually confident, rather than using sexuality as a point of anxiety, which she said is often a “shorthand” flaw for female comedy characters. “A lot of times a female character in her twenties will be anxious around sexuality or uncomfortable with that aspect of herself,” said Jaffe. “It’s more interesting to make a character very sexually confident, and her anxiety and neuroses come out of something else entirely. I like a confident female comedy character, I think that’s a sort of rarity.”

Only in her mid-twenties herself, Jaffe comes to “Neurotica” with impressive comedy credentials. She began writing professionally at College Humor when she was just a senior at NYU, and wrote for MTV’s short-lived “Nikki and Sara Live.” Jaffe found a home for her quirky positive humor at IFC’s Comedy Crib, an online incubator series the network started to help writers develop their voices and find an audience. “IFC was very supportive from the beginning of how really silly it is. It’s got a very particular sense of humor, and they were just incredibly supportive of that.”

Jaffe had initially envisioned the series as a pilot, which was much more grounded, but she soon found the short format creatively liberating. “The web series allowed it to be so aggressively silly in a way that I think a sitcom probably wouldn’t, and that’s just a lot more in line with my comedic voice. It’s such a nice calling card, more than anything else I’ve done it’s really an encapsulation of my voice.”

“Neurotica” doesn’t take itself too seriously, and the juxtaposition between Ivy’s unflagging optimism and a subject matter normally seen as dark or subversive makes the series stand out. Jaffe credits that unique tone with her own sunny disposition, as well as her two major comedic influences, Amy Sedaris and Stephen Colbert’s “Strangers with Candy” and “The Mighty Boosh.” “Those are both shows that have dark streaks running through them, but are weirdly positive. Even when that’s not how that character should be feeling, it’s just this outrageous optimism, which I think is funnier.”

You’d be hard-pressed to find two more worthy comedic influences to be emulating, and “Neurotica” certainly hits the mark (and leaves some, too). Watch the first episode below, or on IFC Comedy Crib.

This Article is related to: Television and tagged Digital, IFC