As fans catch up with the show on Netflix, here's what to take from the finale that could have big reverberations next season. 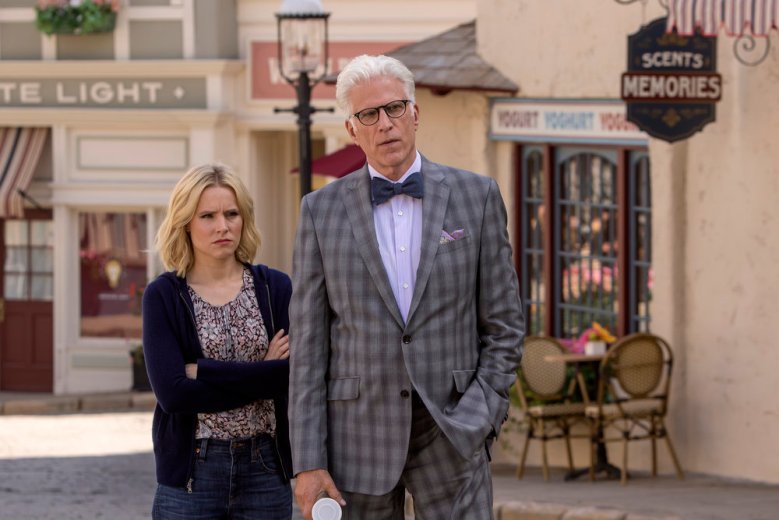 The Season 1 finale of “The Good Place” is nothing short of miraculous.

For a brand new network comedy to not only harness the power of serialized storytelling, but set it in a new brand new world with its own self-contained set of philosophy-rooted rules, it is a feat onto itself. To take thirteen episodes of the show and completely toss them out the window the way that “The Good Place” does and still have it be a satisfying, insightful, and most importantly, funny half hour of television is an extraordinary thing.

For those unlucky enough to have not been able to catch “The Good Place” in its original run, the series is now available on Netflix. Before it returns for its second season next month, IndieWire spoke with show creator Michael Schur about how “The Good Place” was able to pull off a masterful season finale.

If you haven’t had the chance to catch up with Season 1, get thee to a streaming service: aside from Netflix, the show is also available on Hulu and NBC.com. But for those counting down the days until September 21, here’s some extra added bonus info about creating the big reveal and what all of that might mean for Season 2. #1: Pay attention to things that can change with a different context.

Though the episode would culminate with the big reveal of Michael’s (Ted Danson) true plan, it’s kind of shocking looking back at it how bleak his architect work desk is. For a environment that audiences were initially led to believe was actually heaven, there’s a lot of muted gray and drab interior design surrounding Michael’s workspace.

Schur acknowledged that constructing that world was a tricky decision, but its place in the season’s timeline made him feel OK if audiences picked up on something a little sooner than planned.

“I was a little worried honestly, but at the same time, I felt like if we give it away seven minutes into an episode where we’re deliberately revealing it thirteen minutes into the episode, oh well. If we got to within six minutes of screen time of the actual moment that we chose to reveal it, we should be so lucky,” Schur said.

That double interpretation ties in with the biggest hint the show dropped earlier.

“I was more worried about it early on. One of the things we talked about early on was, ‘What is the cruelest thing that a person can do at any moment?’ Someone suggested kick a puppy and it was like, ‘OK, then he’s going to kick a puppy,’” Schur said. “Literally, the most evil, awful, heartless thing you can do, so that’s why in the second episode of the show he kicks a puppy. When you reveal he’s really an evil monster, it’s like, ‘Well, of course he is.’ We wanted to it be completely surprising and then, in retrospect, completely inevitable.” #2: There’s always more happening than what you can see in the frame.

There’s a certain anything-can-happen feeling of the show, even with its strict ground rules. But that uncertainty also extended to the show’s occasional special effects. Aside from Marc Evan Jackson’s character Shawn wrapping himself in an alien pod and the chaos that literally rained down on The Good Place in the pilot episode, Schur wanted to bring something to The Bad Place planning space that got across the full breadth of that area with a single new character.

“We spent tens of thousands of dollars on that special effect for like four seconds of screen time, but it’s very effective because the guy enters and then turns around and leaves. It gives you this idea that just off camera, everywhere you look, if you were to point the cameras to the left or right, you would see lava monsters and dragons and whatever else you could imagine,” Schur said. “It’s the perfect kind of joke for our show because it gives you this glimpse into this kind of fantastical universe that isn’t practical to show all the time. It holds up our end of the bargain for the audience to say like, ‘Yes, this world is fantastical. This realm is fantastical,’ and every once in a while we’re going to give you a little glimpse of that.” #3: The biggest moments are the ones that seem most natural.

As far as the actual moment itself, most of it went according to the way that Schur had scripted it on the page. But when it came time for him to take his spot behind the camera (Schur also directed the episode), some last-minute suggestions from Danson himself helped solidify Michael’s turn as the show-stopping moment it became.

“We always had to push in. I felt like the thing that [Eleanor] said was so giant and mind-bending that we had to give the audience a second to mull it over,” Schur said. “So the camera always pushed in, but then he said, ‘Let me try something else,’ and he did that giggle that he does in the version that aired. It’s so much creepier and scarier and more awful and more horrifying. As soon as he did that, I was like ‘Oh, this is the right version.’ Junk all the other versions. Now we have to shoot this giggle like ten times.”

And the cackle that sounds like it’s layered to make Michael seem even more evil and diabolical? All Danson.

“I believe that the take that we used was the very first evil giggle take and it was the best one probably, because it was the most instinctual,” Schur said. “We shot a bunch more, but he just came out with it and it was so natural and so perfect. The guy, he knows what to do. It’s Ted Danson. We certainly didn’t alter the audio or anything like that. It was just what tumbled out of him when he decided to make that choice.” #4: All the actors know what’s going on this time.

Though Danson and co-star Kristen Bell knew the whole season arc before shooting began — a detail Danson wasn’t as tight-lipped about as you might expect — the rest of the major actors in that scene fell somewhere in the middle on that timeline.

“I didn’t want them to have to juggle too many things in their head. It felt like if we gave them this bigger thing that was going to happen, it might cloud the way that they perform their basic episodes,” Schur said.

Once prep work began on “What’s My Motivation,” which ends with Eleanor hijacking the train to go The Medium Place, Schur finally brought in the rest of the main supporting cast to unveil the endgame.

“After the read-through for that episode, we sat everybody down and I laid out what the last two or three episodes were. And it was great,” Schur said.

But for anyone looking for clues or discrepancies in individual performances this time around, Schur explained that everyone will be tackling Season 2 as a single unit.

“I felt a little guilty. So this year I told them when we came up with the end of the year, the sort of big arc for the whole year, we told them all about it before. They’ve known about basically the whole season from before we started shooting the first episode, so everybody’s been on the same page this season,” Schur said. #5: Get ready to see the world through Michael’s eyes.

Whether viewers had realized it or not, the season finale underlined something that had been missing from Season 1. Any chance for Michael to have some solo self-reflection time would inherently give away the season-long twist, so the finale was the first chance to see Michael by himself.

“If you go to Season 2 after this ending, you have this gigantic weapon, which is you have never seen the world from Michael’s point of view before,” Schur said. “You’ve never seen backstage in his life, what his daily trials and tribulations are, what he’s going through. So that was instantly the plan was if we get a Season 2, that we switch sides and we get to see Michael’s POV and what went into it from his side – following his trajectory and then bouncing back and forth between him and Eleanor.”

As fans look toward Season 2, Schur explained that one of the big changes in the next round of episodes is the idea that Michael gets a chance to be a true focal point as the other characters work through their respective struggles.

“That’s what you will get a lot of in Season 2, to see the world from behind his eyes and what pressures are on him and how he fits into the universe and what his goals are,” Schur said. “Everybody else’s memory is wiped clean and they start over. It would be extremely boring to just go through another full season of TV with Eleanor slowly trying to become a better person and Chidi slowly teaching her, and her becoming friends with Tahani after first hating Tahani and realizing Jason’s a monk. So we were sure to say for the beginning of the process, ‘This is not going to be the same season.’ We’re telling different stories and the easiest way to tell different stories is to switch the point of view to Michael’s perspective.”

And though Michael will have an added push in Season 2, fans can expect a few more curveballs when the show returns.

“We did a lot of other things, as you’ll see, but that was an incredible tool to have. It made the story breaking actually pretty easy,” Schur said. “It’s very rare that you have a show where you get all the way to Season 2 and you haven’t ever seen the world from the point of view of one of your main characters.”

“The Good Place” Season 2 premieres September 20 on NBC. Season 1 is currently available to stream on Netflix, Hulu and NBC.com.

This Article is related to: Television and tagged NBC, Netflix, The Good Place