Noémie Lvovsky's heartfelt work has plenty of potential but keeps coming up short. 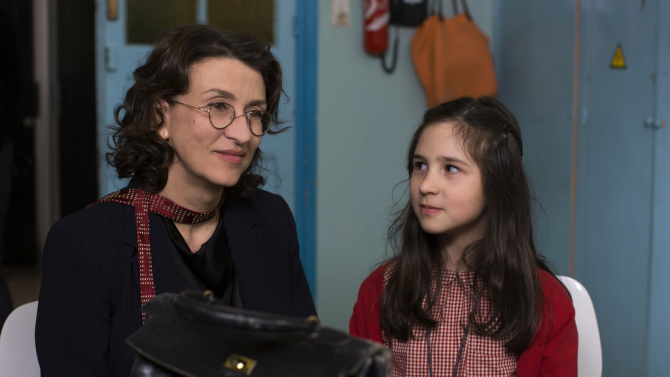 With its cluttered bedrooms and eye-popping primary-colored scarfs and skirts, Noémie Lvovsky’s “Tomorrow and Thereafter” is a film of tactile pleasures. Its inhabitants move through a world dense with thousands of miniscule details, and just as surely as they stuff their sitting rooms with gimcracks and mismatched furniture do they also ultimately submit them to destruction. Wedding dress hems trawled along wet pavements, school uniforms caked in mud, curtains ablaze in the middle of a living room: these crowded domestic worlds collide with the very real consequences of their owners’ eccentricities and psychological troubles.

But as smart as the filmmakers are in their good taste in costume and as shrewdly as they dress their sets with an eye for detail that would make James Gray blush, so too do they ultimately withdraw from the intensity of emotion that is suggested by the subject matter. For a film about a child struggling to cope with her mother’s madness, “Tomorrow and Thereafter” is remarkably low-key and withdrawn.

The film opens in the office of a high school principal who has called in the mother of one of her students to talk. The girl, the principal explains, has been having difficulty making friends at the school. Other students, we learn, call her “witch” and shun her from their little groups in the playground. The mother, played by Noémie Lvovsky (also the film’s director), interrupts the principal’s careful explanations and pauses, mid-response, to examine her own use of “I forgot” (“I forgot? I forget? Which is correct? I can’t remember”).

The principal grasps for words but the mother continues, turning to her daughter (played by the excellent Luce Rodriguez) for backup. The daughter half-plays along, obviously familiar with the routine of uncontrollable anti-social behavior that compels her mentally fragile mother. Eventually, the act continues out the door, as the mother’s circular insistence on this throwaway phrase eclipses the entire conversation and compels the principal to sit passively as a nin-year-old student leads her mother home by the hand.

The film depicts a succession of these incidents, each escalating in flamboyance and excess and each growing ever more destructive. Mathilde is either in the company of her mother when she slips into the other dimension of madness, or she sits at home with nothing but the company of her pet owl and the occasional glow of a laptop screen, through which she is able to Skype her father. Either she is a resigned accomplice when her mother inevitably draws the attention of the police or she receives the phone call at home and pretends to be her mother’s sister.

But even as these episodes grow in intensity, Lvovsky only meets their craziness halfway. Drawn into the particularities of this world, viewers may find themselves confronted with more and more layers of delicacy and sensitivity. Eventually the assuredness of Lvovsky’s style becomes a liability rather than an asset. The confident way scenes are pieced together, smooth but striking stylistic flourishes perfectly counterpointing the organic, lived-in feel of the homes being filmed, only underline the fundamental restraint that blankets the material.

In one great scene of the type of emotional acuity that is largely absent in the rest of the film, Mathilde’s father (Mathieu Amalric) commits his wife to a mental institution. After a particularly painful fantasy-world episode that ends with the mother and the daughter in the back of a police van, he resolves to take her somewhere where she can’t cause any more problems for his daughter. They wanders the grounds and he pauses to say goodbye. As he sets off towards his car, he turns and looks back at his ex-wife standing there by the doors of the asylum. His matter-of-fact facade slips and real emotion catches in his throat, only to be quickly brought under the kind of control that has characterized the character’s life with his wife.

Moments of this kind are few and far between. When they come, Lvovsky is brilliant at capturing — and in her performance, exuding — a familial intimacy that is hard-earned yet rich in feeling. Otherwise, the film shifts in the direction of high fantasy, making a feint at something beyond the specifics of the world the filmmakers have so lovingly constructed. These dream sequences are seamlessly integrated and yet feel like another shift away from the lingering groundswell of feeling that rests under the surface of the film.

“Tomorrow and Thereafter” was the opening night selection at the 2017 Locarno Film Festival. It is currently seeking U.S. distribution.

This Article is related to: Film and tagged Locarno Film Festival, Reviews