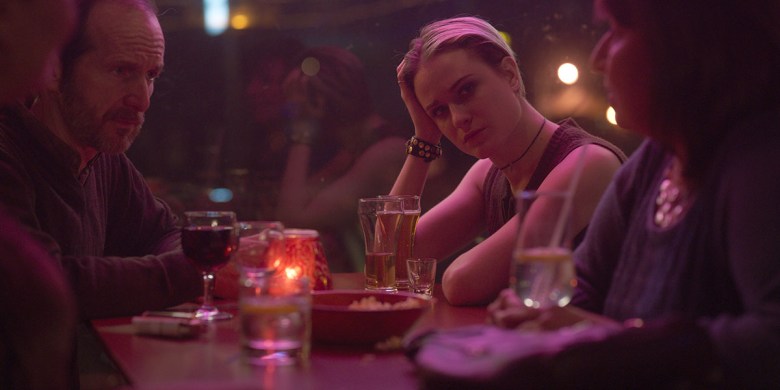 For a long time, female characters had to earn the tedious badge of “likable.” In the last decade, however, actresses like Charlize Theron in “Monster” or Charlotte Gainsbourg in “Nymphomaniac” have paved the way for more complicated women to take center stage — flaws and all. Evan Rachel Wood’s frighteningly troubled character in “A Worthy Companion” is the next welcome addition to this messy bunch.

An unnerving portrait of a kinetically adrift sociopath, “A Worthy Companion” is the feature filmmaking debut from Montreal-based photographers Carlos and Jason Sanchez. Sporting shortly cropped hair and a serious choker, Wood’s disquieting Laura uses extreme manipulation tactics to get the attention and affection she craves. Tightly written and sensitively rendered, the devastating film is propelled by masterful performances, led by a bewitching Wood in the role she was born to play.

We first meet Laura in a hotel room, awaiting a blindfolded stranger. She tightens the piece of fabric violently before unceremoniously unbuckling his pants and tugging dispassionately. “You’re no good to me if you’re not hard,” she hisses. He tells her to go slowly, but she doesn’t really care. Once on top, she slaps him, hard, and he throws her off and storms out. He hurls a “Crazy bitch” as he slams the door, unprepared for the potential pitfalls of meeting a stranger for sex while blindfolded. In the next scene, Laura appears chipper at the front door of a comfortable house, cleaning supplies in hand. Once inside, she encounters mousy teenager, Eva (Julia Sarah Stone), an intriguing and eager target. Laura displays great artistry in her slow seduction of Eva, first as a friend, then as something else entirely. Like a master of disguise, Laura instinctually modulates her voice to mimic the overly saccharine way sixteen-year-olds talk. It’s no surprise Eva is drawn to the beguiling older woman: She spends her days practicing classical piano for a cold mother who rarely doles out the praise, and Laura presents an enticing alternative. When things go south between Eva and her mother, she naturally turns to her new confidante, who offers up her own apartment as shelter. “What do I tell her?’ Eva asks. “You don’t have to tell her anything,” says Laura.

Before long, they’re sharing cigarettes and screwdrivers in Laura’s flat, buzzing with the elation of getting away with something. “I’m happy you’re here,” Laura says, before pecking the young girl lightly on the lips.

But Laura’s precariously cheery veneer has to crack, as her volatile scenes with her disheveled father portend. She shuts him out with the iciness of a teenager, his doting desperation fraying her jagged edges. Wood has a first-rate adversary in the always excellent Denis O’Hare (“American Horror Story”). The already svelte character actor is downright gaunt here, powerless against the force of nature he is trying to protect from herself. Her employer as well, he cautiously monitors his unstable offspring, waiting for the other shoe to drop.

When Laura realizes the police are looking for the runaway teen, her sunny front gives way to paranoia. The innocent girl is helpless against her disturbing manipulation, as Laura resorts to screaming, crying, and even physical violence before crumpling on the floor to beg for Eva’s forgiveness.

The film does not buckle under the weight of its darkness; it clips along though its 105 minutes with little excess, leaving much to the imagination. The Sanchez brothers are experts at doing more with less, and at cutting just before things get too gruesome. The images speak louder than any exposition could: Her father’s profile in shadow as he lingers outside the car window, or the mirrored gesture of a parent’s hands on a child’s tensed up shoulders.

Wood is frighteningly good as Laura, earning her place as one our most versatile and risk-taking actresses (Laura is a far cry from Dolores on “Westworld”). Like Theron in “Monster,” Wood is unafraid to make herself grotesque, and does so with wild abandon. That she is also playing queer is nothing new for her, though one reward for her years of being out is that she is not beholden to portray only positive representations. Her years of visibility earned her a juicy and complicated acting challenge, “A Worthy Companion” for a more than worthy actress.

“A Worthy Companion” premiered at the Toronto International Film Festival in 2017. It is currently seeking U.S. distribution.

This Article is related to: Film and tagged A Worthy Companion, Evan Rachel Wood, Reviews