As a police chief pushes himself to his psychological limit, this overbearing Amazon drama asks its audience to do the same. 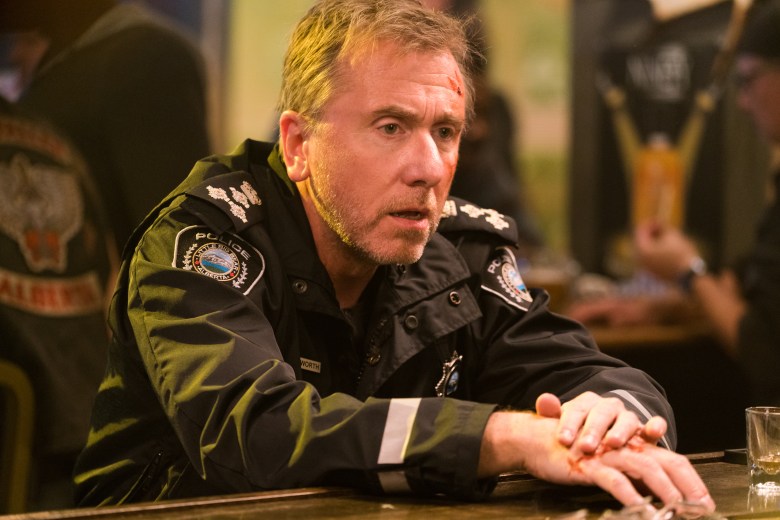 Kicking off a TV series with a teenage girl’s face full of blood is a pretty strong indication that it probably won’t get much cheerier from there. “Tin Star,” written and created by Rowan Joffe, doesn’t just use its in medias res opening as a statement of tone and danger, it uses it as a benchmark. By the time the Amazon series is halfway through its freshman season, physical and mental suffering becomes the exhausting, all-encompassing norm. A modern western, told through mild corporate intrigue and heavy doses of vice and violence, it’s an exercise in endurance with few character rewards at the finish line.

The primary target of this anguish is Jim Worth (Tim Roth), a British ex-pat newly relocated to a tiny town nestled in the Canadian Rockies. As the recently appointed police chief, the locals not only see him as a literal outsider, they quickly find fault with his methods. When North Stream Oil representative Elizabeth Bradshaw (Christina Hendricks) comes with a community proposal, Jim’s skepticism digs him into a deeper hole with citizens and corporate parties alike.

At the start, “TIn Star” seems like a refreshing antihero antidote. Jim acknowledges his past struggles with alcoholism and the sins of his past, both in and outside his AA meetings. With his happy marriage to wife Angela (Genevieve O’Reilly) and expectedly tempered kids (Abigail Lawrie and Rupert Turnbull), the show seems primed to look at what life is like for someone in a position of authority after they’ve reclaimed control of it. We often see what happens to characters who’ve plumbed social and legal depths, but those characters rarely survive long enough for us to get a glimpse at a post-redemption existence.

But the tragic event alluded to in the show’s opening, and explained at the end of its first episode, throws “Tin Star” into an endless wheel of psychological turmoil that more often than not spins out of control. The aftermath awakens Jim’s alter ego of sorts, visible whenever he looks in a reflective surface. Yes, when Jim looks in a mirror in times of crisis, an independently moving version of himself stares back, tempting him back into a life of blackout drunkenness. (It’s a conceit as grating in practice as it is in theory.)

While Jim struggles to keep his family intact and keep his murderous impulses at bay, North Stream Oil lingers in the show’s background. One of the show’s rare deft touches is including a series of insidious energy ads, even as we see how they might possibly be connected to the ensuing bloodbath the show swims around in.

As the violence escalates, we come to know a gang of hired hands charged with adding to the show’s growing body count. For as elusive and murky as Jim’s two personalities are, a mysterious hitman (Oliver Coopersmith) is on similar shaky ground. Much as “Tin Star” bombards its runtime with Jim in various states of emotional distress and misery, this enigmatic angel of death mostly exists as a vehicle for demonstrating how twisted his psyche is.

Catastrophe has a way of heightening tension and elevating subtext to the surface, but with so many of these characters pushed to their extremes, the result is a show in search of shock value well after its audience has been desensitized. And in case a viewer is ever in doubt about what kind of people the folks on either side of this battle, Angela is there to remind them who her husband really is: “You’re not that man anymore,” she says in the show’s premiere. “He’s a good man,” she repeats three episodes later, with an added touch of unknowing irony.

Jim’s wife isn’t the only side character in this story that rarely gets elevated above prop status. All of these dramatic developments take place near a First Nation reserve, which leads to an eventual dispute over Jim’s authority in that area. It’s another shortcut to creating tension, using cultural differences as a story wedge and little else.

“Tin Star” does occasionally take advantage of its idyllic environment, setting the picturesque mountain landscapes against the garish human nature of most of the people who reside nearby. But even then, the show can’t resist setting up that contrast in the starkest terms. Killers staring down wolves and helpless individuals dangling over the edges of dams help to show that subtlety is not this series’ strongest asset.

The series’ two ostensible leads do as much as they can with the psychological burdens they’re given. Even when asked to sucker punch an unsuspecting barfly for the third or fourth time, Roth commits to Jim’s gradual descent back into his old ways. Hendricks plays the persuasive corporate communications expert angle well, even when the series defines Elizabeth almost exclusively by her profession.

The driving force of “Tin Star” isn’t revenge or justice, but grief and regret. That’s not necessarily a reason to dismiss a show like this that’s so laser focused on watching one man’s life quickly disintegrate. It’s just that the overwhelming sense of loss and futility doesn’t evolve into anything more. Even in the face of an intricately plotted third episode, there’s little to take away from a time-bending story structure if everyone just ends up broken in the end.

Watching this sheriff fight off both attackers, friends, and foes, “Tin Star” becomes a cat-and-mouse thriller, where the cat has rabies and the mouse escaped from a genetic testing lab that left it with two heads. Watching “Tin Star” puts you firmly in the spot of these characters: staring at destruction and powerless to stop it.

This Article is related to: Television and tagged Amazon, Tin Star, TV Reviews