During IFP Film Week Adele Romanski and Barry Jenkins talk about James Baldwin, their new company PASTEL and life after the Oscars. 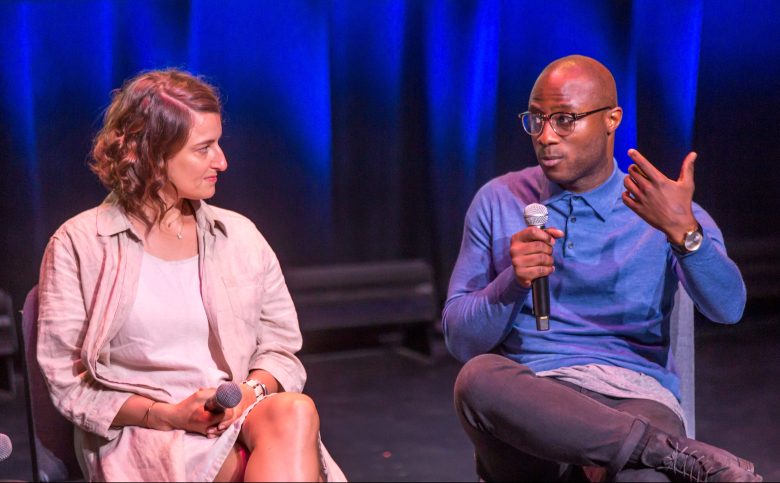 When Barry Jenkins went abroad three years ago, he came back with two scripts. One of them was “Moonlight.” The other was a James Baldwin adaptation that will serve as his next project following his dramatic Oscar win earlier this year.

The reason Jenkins and producer Adele Romanski focused on “Moonlight” was simply a matter of not having the rights from author James Baldwin’s estate for “If Beale Street Could Talk” – which they obtained last winter, when Jenkin’s status sky-rocketed with the success of “Moonlight.” Romanski and Jenkins are currently in New York, halfway through pre-production on “Beale Street,” which will start shooting in a few weeks. They took a break over the weekend to participate in a conversation together at IFP Week, where Jenkins elaborated on his interest in the new project as well as his expanding profile.

Jenkins talked about discovering Baldwin when a college professor recommended he read “The Fire Next Time.” In 2001, the young film student was blown away. James Baldwin in “I Am Not Your Negro”

“Then I read ‘Giovanni’s Room,’ and being a dude born and raised in the projects in Miami, it was my first experience with any sort of queer literature,” said Jenkins. “The fact that this queer literature was written by the black man who wrote ‘The Fire Next Time,’ and the protagonist is a white man? I was like, this is fucking crazy.”

Jenkins went on a tear, reading all the Baldwin he could, as he saw elements of Baldwin’s work helping define what type of voice he wanted as a filmmaker.

He never thought about adapting Baldwin, but that’s because he hadn’t read “If Beale Street Could Talk,” which he only discovered because a filmmaking friend shared it with him around the time Romanski and Jenkins were workshopping what Jenkins should write to be his second feature. “Beale Street” was the first Baldwin book Jenkins not only saw as a movie in, but one he saw himself in as well.

Romanski and Jenkins acknowledged that their professional lives changed radically on February 27, when “Moonlight” won best picture. One of the offshoots of their success has been establishing a production company, PASTEL, with the support of Brad Pitt’s Plan B (which produced “Moonlight”) and a two-year movie production deal with Annapurna.

Romanski emphasized the company is intentionally small, with only herself, Jenkins and two trusted, long-time collaborators in producers Sara Murphy and Mark Ceryak.

“There’s this foundation of trust and we’re allowed to stumble together and know that it’s ok and know that no one is going to turn around a tear you down because you make a mistake,” said Romanski, who made it clear they’re still learning how to talk about PASTEL and define their mission.

“I think we’re obviously going to do movies and we’re doing television,” she said,  noting Jenkins’ adaptation of Colson Whitehead’s “Underground” for Amazon. “I think we want to figure out what else we could do outside of those – how do we continue to be outside the box? I have a passion for radio, we’re talking about radio stuff, we wonder about making short films because that’s a fun thing we don’t seem to do anymore. Maybe VR, dance, we want it all.” (The dance aspect was news to Jenkins, who jokingly blurted out, “dance!?”)

Jenkins admitted that he’s struggled with time management post-Oscars, trying to make sure he to fulfill his responsibilities in growing PASTEL, but also taking advantage of the momentum that’s behind “Beale Street” and “Underground.”

The duo were asked if they would consider parlaying their success into making a big blockbuster. Romanski didn’t hesitate that she would like to produce one, but added that people have mistakenly assumed they have been offered big studio projects. “It’s funny because on Twitter, people will be like, ‘Oh, ‘Star Wars’ is open, [call] Barry Jenkins.’ And I’m like, I’m not getting those calls,” said Jenkins. “I got to spend a little bit of time with Denis Villeneuve [ whose recent credit is ‘Blade Runner 2049]. Talking to him is like talking to Tarkovsky in a certain way, he has a very elevated approach to the art form, and I’m going to use the word ‘and yet’ – even though I think I shouldn’t – he does these really big, massive films now.”

Jenkins added that he has no problem with a big movie and a big paycheck, as long as he can find the right fit.

Given that the conversation took place during IFP Film Week, the audience was filled with filmmakers who were in a situation similar to the one Romanski and Jenkins found themselves in only a few years ago – taking 30-plus meetings in which they pitch their projects to potential financiers, producers and distributors. One African American filmmaker asked Jenkins and Romanski if they had found it difficult pitching as an African American and a white female, when often the people on the other side of the table were white men.

“Pitching sucks, let me just say that,” said Jenkins. “You can be the whitest blue blood white dude from Harvard, Dartmouth and Yale, and pitching sucks.”

Jenkins went on to explain that what he learned from pitching unsuccessfully at IFP was that if he found himself selling it was often a bad sign. He then returned to the original question, admitting that even now it’s hard for him to not take his race into account. He recalled taking a meeting at a major studio the week of the Oscars, and realizing the writers and executive were pitching him and Romanski, and not the other way around.

“It was insane. It was a big pitch, and here’s power, we said no,” said Jenkins. “I got to say, it was nice to watch some blue blood pitch me.”

This Article is related to: Toolkit and tagged Adele Romanski, Barry Jenkins, If Beale Street Could Talk, Moonlight