From improvised musicals to marches against fascists to conversations with internet trolls, the summer months brought some fascinating stories from the podcast world. 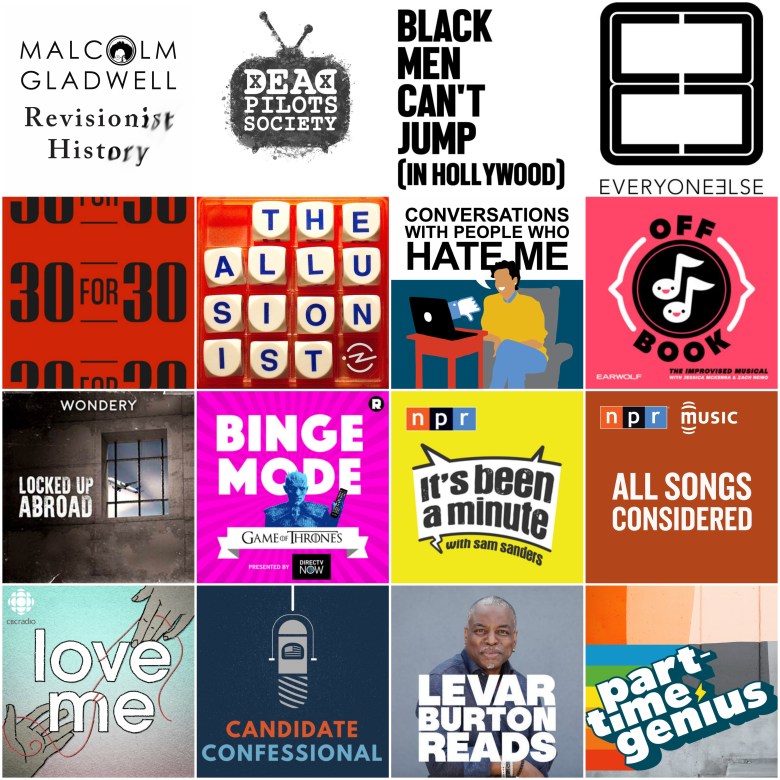 When the calendar turned from June, we counted down our list of the best podcast episodes of 2017 to that point. Now that fall is on our doorstep, there’s nearly an entire summer’s worth of fresh shows to listen to and appreciate.

From Memorial Day onward, the nonstop flow of audio entertainment kept up at breakneck pace. (Think of how many sunlit jogs, outdoor yardwork sessions and scorching commutes they had to fill!) With plenty of other events and sources of information vying for attention between the end of May and the beginning of September, a few of the best episodes may have slipped through the cracks.

So here to provide a handy roundup of new and returning favorites are some quality podcasts episodes to add to the fall catch-up queue: the funny, fascinating and solemn installments from this year’s summer months.

ESPN’s “30 for 30” is one of the most enduring ongoing documentary series on TV, which made their new podcast offshoot one of the summer’s most exciting new developments. From the “Dan and Dave” kickoff episode to the surprising history (and financial windfall) behind the ubiquitous “Yankees Suck” T-shirts, audio has been as good to these new stories as TV was to their predecessors. The most fascinating of these new episodes might be Rose Eveleth’s deep dive into a historic baccarat ploy that left an eight figure sum of money in limbo. The detailed explanation of a tricky poker scheme and the woman who made it all possible is a worthy addition to these tales from the periphery of the sporting world. (For a companion piece, listen to Eveleth describe the piece in a little more detail on “The Gist.”)

Comedy podcasts are unpredictable. With a full head of steam, before you know it, the simplest conversations can lead to some magical, unexpected places. That’s exactly what happens around minute 79 of this discussion of the best summer songs. A tiny misunderstanding leads to a wave of realizations so pure and perfect, no writer could have scripted it better. Further proof that whenever “All Fantasy Everything” turns to music, magic happens. (See also: “Band Names” and “Karaoke Jams.”)

“All Songs Considered” — “The 150 Greatest Albums Made By Women”

In honor of the blockbuster NPR Music feature “Turning the Tables,” which sought to put the modern music canon on more equal footing, regular co-hosts Bob Boilen and Robin Hilton stepped aside for an all-female discussion of the comprehensive list. Ann Powers, Suraya Mohamed, Anastasia Tsioulcas, Jenny Gathright, and Andrea Swensson share their enduring favorites, underrrated classics and early musical memories. From Nina Simone to Joni Mitchell to the less-explored figures of world music, this is an overview that speaks to the breadth of musical achievements and the incredibly emotional connections that they continue to make, decades later. As a journalistic and personal endeavor, these picks are perfect for adding to your non-podcast listening queue.

Helen Zaltzman’s dispatch from the latest Lollapuzzoola crossword puzzle extravaganza in New York City rounded out the summer in style. One part celebration, one part competition, one part sociology experiment, Zaltzman not only looks at who takes part in the annual tradition, but why. With stories across the singles and pairs divisions, this episode follows the spirit of the event itself by giving the casual participants and contenders equal chance to share their love of a time-honored daily tradition. Zaltzman also manages to translate the finer points of an intricate crossword clue to an audio medium. No small feat.

“Game of Thrones” might just be the TV show that podcasts are made for. With the dense mythology of the book series and a litany of memorable characters and incidents on both page and screen, Mallory Rubin and Jason Concepcion’s deep dive into the series certainly hasn’t lacked for thematic and specific topics. This farewell (for now) installment of the ongoing series gave the two the chance to juggle the last new episode for many months, along with a consideration of the season overall. In an emotional and wonderfully crafted bit of analysis, the two connected the future of “Game of Thrones” with the traditions of a beloved genre: a thinking fan’s plea that whatever comes next in this saga stays true to its literary and storytelling ancestors. It’s a scholarly investment that goes far beyond the swiftly crumbling Wall.

As the nation was still reconciling the aftermath of the deadly Charlottesville protest back in early August, Jonathan Braylock, Jerah Milligan, and James III took a pause from film discussion to place the events of that weekend in context. After a discussion of representation, both onscreen and in public monuments, the group settled in for a look at the 1989 film “Glory.” The conversation covers the difficult history of Civil War entertainment, encompassing what works and what doesn’t when it comes to slavery and slavery-adjacent stories. Even when deviating slightly from the usual format, “Black Men Can’t Jump In Hollywood” brings some humor to a trying subject, and this is one of their most insightful looks at the cause.

Solidifying themselves as some of the most entertaining, insightful film talk you can find in the podcastiverse, #TheTwoFriends Griffin Newman and David Sims dove headlong into the Christopher Nolan oeuvre for a thematic look at one of Hollywood’s most distinctive careers. Looking at this hinge entry into the Nolan canon, this episode on the 2008 box office behemoth is just as much about the surrounding cultural influence of this movie as it is its own merits. For bonus fun, check out some of the other great installments in this miniseries, including a structural-riffing conversation about the goofy logic and well-crafted execution of “Inception” and a heartfelt appreciation of “Interstellar” (further proof that these shows are best when folks love the films they’re talking about).

Previous installments of this series have focused on losing campaigns great and small, following failed Senate bids and premature Presidential runs alike. Throughout, hosts Sam Stein and Jason Cherkis have been equal opportunity examiners, talking with figures from both sides of the ideological spectrum. But for a glance back at a point in American history nearly a decade ago, when the country faced an ongoing economic crisis, “Candidate Confessional” enlisted a bipartisan panel to show how one piece of doomed legislature was received on opposing sides. Time has a way of recontextualizing failure, but this shows just as much about how the political process has changed in the nine years since.

“Conversations with People Who Hate Me” — “Episode 1: You’re a Piece of Sh*t”

When it comes to internet outrage, “Do not engage” might be the mantra of our time, but this new series is a fascinating exception. Interacting with an online antagonist who had sent unsolicited harsh and offensive messages to him, Dylan Marron decided to retaliate with rational discussion and a reasonable desire to reach a certain level of common understanding. The discourse between Marron and his first “guest” is civil and while the two don’t walk away from the call with completely overlapping ideologies, it’s a healthy path toward something more productive than 140-character spats. The episode exists as proof that the internet may have the power to magnify our nastiest impulses, but it also has the power to facilitate something positive, too.

This monthly series revives passed-on pilot scripts with some of the best one-night-only live read ensembles you’ll find anywhere in the podcast world. Their June offering, “Rollerworld,” centered on a wonderful first episode of a series based on young women working at a frozen-in-time skating rink. A few of the visual jokes lose their way in the transition to audio, but hilarious performances from Jane Levy, Mae Whitman, Allison Tolman, Zachary Knighton, Adam Scott, and more are enough to make you wonder why this isn’t on its seventh season on ABC right now. But if you enjoy this, there’s a silver lining: “Rollerworld” writer Samantha McIntyre also penned the script for Brie Larson’s debut feature “Unicorn Store,” set to premiere at TIFF later this month.

Up next: Ten more quality episodes, including headlines from “The Onion,” an improvised musical, and a literal recipe for heartbreak

Page 1 of 2
Continue Reading: The 20 Best Podcast Episodes from Summer 2017

This Article is related to: Podcast and tagged 30 For 30, LeVar Burton, Revisionist History