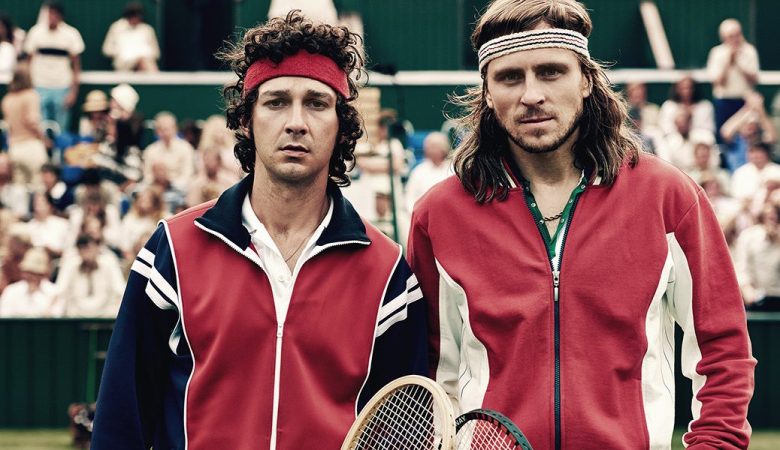 Shia LaBeouf is hardly a dead ringer for a young John McEnroe — he looks more like one of Royal Tenenbaum’s grandchildren than anything else — but it’s hard to imagine anyone more perfect for the part. As a rising superstar in the early ’80s, the hotheaded McEnroe was as famous for his mid-match tantrums as he was for his tennis. He was one of the most gifted natural talents the game had ever seen, but he would erupt at a moment’s notice, self-destructing on some of the world’s biggest stages.

The parallels between McEnroe and the volatile young actor who plays him in “Borg/McEnroe” are obvious enough to make themselves, but the saving grace of Janus Metz’s relentlessly self-serious sports drama is that the film doesn’t take its casting for granted — it refuses to rest on the meta-textual fun of watching one explosive celebrity play another. On the contrary, LaBeouf is asked to peel back his increasingly opaque veneer and confront the rage that has always seemed to be simmering just beneath the surface.

After years of widely publicized art projects in which the artist formerly known as Mutt Williams worked to create a distance between himself and his famous (or “not famous”) persona, it’s thrilling to see LaBeouf channel his anger into something more than tabloid fodder; to play with it, to make it real, to investigate its value. His performance here isn’t as singular or nuanced as his recent work in “American Honey,” but it always feels like an act of reckoning.

If anything, LaBeouf is so compelling as himself that it’s easy to forget he’s playing someone else (it’s genuinely jarring when he receives a note to addressed to “John McEnroe”). In a movie that contradicts its overbearing morals and offers only the most ambivalent conclusions about the right way to win at Wimbledon, it’s gratifying to watch one of Metz’s leads prove the story’s primary lesson: Focus on the things you can control, because it’s the only way to deal with the things you can’t.

If not for LaBeouf, “Borg/McEnroe” would have nothing to offer that you couldn’t get from simply watching a broadcast of the 1980 Wimbledon Men’s Final. The event bookends Ronnie Sandahl’s screenplay, which opens with an Andre Agassi quote (“…every match is a life in miniature”) that it immediately proceeds to ignore, the story relegating the climactic duel to the last few minutes in order to race through the formative moments of both players’ entire biographies.

We start with Björn Borg, and for a long time it seems like McEnroe is only going to matter when he’s standing on the other side of the court. American viewers may be accustomed to seeing one of their own as the hero, but this film was written by a Swedish man and made with Scandinavian money, so Borg is unfortunately the closest thing it has to a leading man. While “Borg/McEnroe” does a fine job of underlining the bond between these athletes (and toppling the rivalry manufactured for them), the movie’s structural imbalance remains a problem.

The biggest reason for that: Despite Sverrir Gudnason’s impeccably stoic portrayal, Borg is written to be even more boring than sports fans were ever led to believe. The gentleman to McEnroe’s rebel, Borg was always depicted as a machine, human only for his superstitions. His image resulted from (and reinforced) the Ingmar Bergman stereotype of an impossible severe Swede, and his unflappable demeanor helped to cement his brand. That whole even-keeled hard worker thing can be interesting, but there’s a reason we don’t have a Tony-winning musical called “Burr.”

The begrudging scenes between Borg and his fiancée (Tuva Novotny, a dead ringer for Noomi Rapace) don’t help, as the couple’s private hopes of getting married on their own terms, away from the paparazzi and all the other pressures of fame, only underscore the extent to which the film is trying to get blood from a stone. Copious flashbacks to Borg’s surprisingly brash teenage years further distract from the task at hand, especially because the relationship between the player and his coach (Stellan Skarsgård) is never as rich as it needs to be, and the beat where young Björn is taught to bottle up his emotions is unconvincing to the extreme. The other key reason why privileging Borg doesn’t work is because Sandahl’s script doesn’t commit to the bit. “Borg/McEnroe” is a story of parity, both men share top billing, and the film recognizes that people only loved to watch them play because they were such perfect foils for each other. And yet, one satisfying character arc would have been preferable to two extremely compromised ones. For all that LaBeouf brings to his role, McEnroe’s flashbacks are a confused mess, offering dull glimpses of a polite child math prodigy who — for reasons that are never dramatized — grows up into a human firecracker. We spend almost as much time watching Borg and McEnroe’s adolescent years as we do watching them fight their way to the Wimbledon finals, and absolutely nothing is made of the idea that these two men seem to have switched personalities mid-stream.

The tennis creates plenty of conflict to hold your attention as you watch the film rally between the two players, but even “Battle of the Sexes” does a better job of shooting the sport, and that movie is about an exhibition match, not the Wimbledon Finals. After 90 minutes of placing his shots as carefully as Roger Federer, Metz — an accomplished documentarian who’s making his narrative feature debut — finds himself overwhelmed by the possibilities of capturing a five-set war of attrition, skipping between looks as if at random.

Like someone shooting a martial-arts movie with a cast of untrained celebrities, Metz is forced to cut around the fact that neither Gudnason nor LaBeouf is ready for the WTA, but his relentless volley of medium close-ups and cringe-worthy cutaways sucks the energy right out of the arena. An electric postscript in which Borg and McEnroe actually talk to each other is so good that you wish Metz would have done away with the tennis action altogether.

What we’re left with is a staid little movie that races around the court and rallies itself to exhaustion, a historical drama that enshrines the narrative underpinnings of all great sports stories without doing anything to upend them. If Metz’s film were as serious with its characters as it is with its tone — as flawless as Borg and as fun as McEnroe, rather than the other way around — perhaps it could have amounted to more. As it stands, we’re left with a movie that double faults away most of its advantages. Still, in a fittingly perverse touch for such a confused project, it took playing John McEnroe for Shia LaBeouf to learn how to harness his anger.

“Borg/McEnroe” premiered at the 2017 Toronto International Film Festival. Neon will release it in 2018.

This Article is related to: Film and tagged Borg/McEnroe, Reviews, Shia LaBeouf, TIFF 2017