The Oscar winner–turned-filmmaker discusses her first feature, and why she hopes its genuine message will push other creators forward. 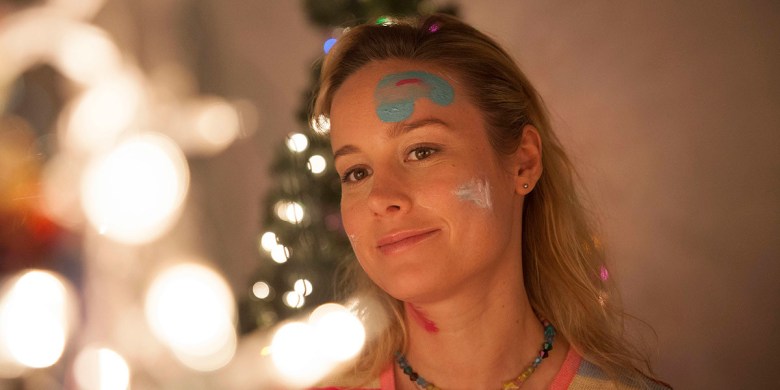 But what she’s always wanted to do is direct. For Oscar-winning actress Brie Larson, moving behind the camera wasn’t the sort of career change she envisioned only after years in the business — it was something she grew up doing. Her own opportunities just had to catch up to her first.

“I’ve just made movies my whole life,” Larson recently told IndieWire. “Every summer, I would write and direct a film that I would direct my cousins in. It mostly took place in the garage, and I would just hang up different sheets and use our storage containers as different heights for things. I had a disco ball that I put outside the garage door, and when I turned it on, it meant we were rolling.”

She added, “I guess this has been part of my way of expressing myself for a very long time.”

Larson also stars in the charming new feature as recent college grad Kit, a failed artist who believes the only way to succeed is to shed her creative dreams and become an entirely different person in the process. While her parents (Bradley Whitford and Joan Cusack) are heartened by what they perceive as perennial kid Kit finally growing up, she suffers — in often drily amusing fashion — to discover the kind of person she really wants to be. Oh, and then Samuel L. Jackson shows up and offers Kit her very own unicorn, as long as the conflicted character can prove herself worthy. Straitlaced Kit? That’s not going to cut it.

The film is Larson’s third trip behind the camera, having previously co-directed the shorts “The Arm” and “Weighting,” which bowed at Sundance and SXSW, respectively. Those films helped fuel not just Larson’s relentlessly creative expression, but her sense of self. It seems only right that “Unicorn Store” tackles those same themes.

“Doing shorts was part of my way of taking control back from waiting around to get the next job,” she said. “Anything that I could do to make me feel like I had a life outside of acting, so that when I didn’t get jobs, it didn’t feel like my whole world was over. It just felt like one piece was kind of ending.”

Larson initially auditioned to star in the film about five years ago, but the production, later set to star Rebel Wilson and be directed by Miguel Arteta, never got off the ground — and the actress never really got it out of her head. When it was offered up to her after her big Oscar win for her turn in “Room,” complete with a directing gig too, she knew it was finally right.

“I always felt like I was supposed to tell that story,” she said.

She worked on the script for a year alongside scribe Samantha McIntyre, further fleshing out characters and readying it to share with potential producers. Larson, who has worked in the industry since she was a kid, was prepared for a long wait when it came to financing. “I thought, ‘well, we’ll put it out there, it could be years before I actually end up doing it and start wrapping my head around this,'” she said.

24 hours later, it sold. (Larson produced the project alongside the District’s David Bernad and Ruben Fleischer, Paris Kasidokostas-Latsis, Terry Dougas, and Lynette Howell Taylor.) Larson worked on the earliest pieces of pre-production while filming Destin Daniel Cretton’s “The Glass Castle,” a process made easier by the fact that both films shared a number of department heads, indie synergy at its finest. That doesn’t mean that she was quickly able to shake off first-time nerves.

While she acknowledges the creative process that goes into her acting, directing “Unicorn Store” tapped into something deeper, and perhaps something scarier. “I do understand why we don’t have a ton of new voices,” she said. “Because it’s really hard for new voices to get through this process, getting a financier, getting the right cast, getting the right team, selling it, getting it into a festival. It’s a very difficult process. It’s a very hard on you mentally.”

But plenty of good things happened along the way.

Larson’s starry cast came together with surprising ease, and co-stars like Whitford and Cusack were “the perfect people for it” and signed on after early offers. Jackson actually approached her first, while they were filming “Kong: Skull Island,” offering her a point of view and passion that Larson wanted to see reflected in the final film. “The hardest part for me was wondering if people would trust me to do this,” Larson said. “And realizing how much as an actor, it’s an act of trust to sign on to any film.”

Another actor who trusted Larson from the jump: Mamoudou Athie, best known for his work on the series “The Get Down” and the recent Sundance hit “Patti Cake$.” For the role of Virgil, a hardware store employee first roped into Kit’s getting-ready-for-unicorn process who becomes someone even more important to her, Larson wanted to snag a fresh face to portray a different sort of masculinity.

Athie sent in a tape after hearing about the part from fellow “Get Down” star Yahya Abdul-Mateen II (who had already recommended him for his “Patti Cake$” performance), one that was apparently good enough to get him a Skype interview with Larson.

“I was a little bit nervous about how it would go,” Athie admitted. “She had just won an Oscar! And she was so cool. Immediately, I was like, ‘Oh, this is one of my people.’ We had a conversation. I feel like we went through the gamut, we talked about stereotypes and the industry, hope and humanity. We talked for like 45 minutes.”

The connection between the pair was immediate, and once Athie got the part, he was pleased to see that their bond carried over on set. “It just felt kind of innate,” he said. “Just, ‘Oh, we understand what this is.'”

As an actress, Larson was struck by Kit’s “uniqueness, and her inability to let go of her uniqueness.” The film follows Kit’s early attempts to live the kind of straitlaced life she believes is expected of her – complete with office job and buttoned up suit – but it never quite sticks, and the film is as much about Kit’s coming of age as it is about her staying herself. Larson loved that, but she also related to it.

“I know that the film isn’t for every person,” she said. “But I hope that for the people that I did make it for, it resonates with them as a way of saying, ‘We need these voices that are unique and different.'”

But Athie didn’t mince words about his experience on set with the fledgling director. “She is one of the best directors I’ve ever worked with,” the actor said. “Just extraordinarily generous, but also so clear, so succinct with her directions…I don’t know how she actually, how? Just insane. I didn’t understand how she was able to vacillate from being so vulnerable and emotionally available [while acting], to being so precise [as a director].”

Larson, who has long been outspoken about the need for diversity and respect in the industry, is eager for the film to inspire others, though perhaps in not the exact way most would expect. “My hope was, whether the movie is good or not, it’s another piece on the board,” she said. “People can look at and either go, ‘This movie is amazing, I want to do that,’ or you can go, ‘This is the worst thing I’ve ever seen, if she can do this, then I can definitely make a movie.'”

She added, “Through that, my hope is that we have more women, more people of color, people of different sexual orientations telling their stories, because that’s what we need. We need just more. We need more of different.“

Larson understands that audiences might be tempted to dismiss the film as something quirky or whimsical, but she knows there’s more to it. “Obviously, the film is a little off-kilter, and a little surreal, but I think that the world we live in is surreal,” Larson said. (Athie compared its outlook and tone to “Eternal Sunshine of the Spotless Mind.”) The unicorn store might be metaphorical — or not — but Larson sees it as emblematic as the biggest and best of dreams.

As she put it, “We should all be allowed to have our dreams, even if they make us look a little crazy.”

“Unicorn Store” had its world premiere at the 2017 Toronto International Film Festival. It is currently seeking distribution.