The directors of "Death in the Terminal" sought out to make a movie about a victim, but eventually realized that they were the real subjects instead. 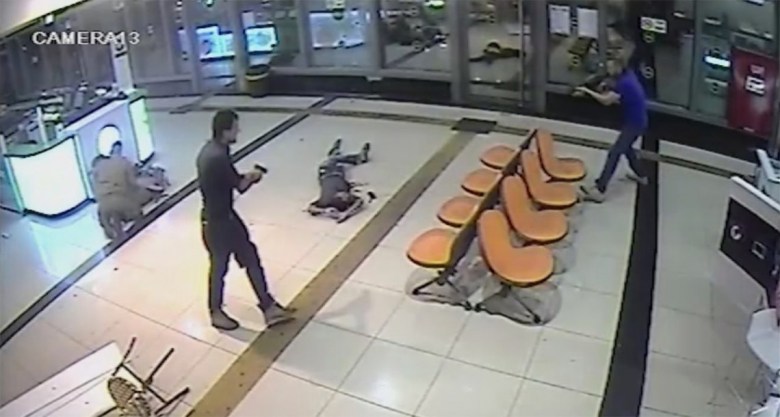 “Death in the Terminal”

The tension was unbearable. Israel was in the midst of the “individual’s intifada,” a new kind of uprising that replaced the more familiar dangers with seemingly random stabbings and vehicle attacks. Suddenly, every person on the street was a potential threat, every car a potential weapon. Mundane activities—walking the kids to school, taking the bus to work—now seemed perilous. People wanted the government to protect them, and the government appeared helpless. Israel’s security minister advised citizens who owned a gun to carry it with them. Old ladies carried kitchen knives and rolling pins in their bags.

And each day the headline news provided a drumbeat to the growing collective fear: three stabbings in one day, or maybe a shooting just down the street, in a place you thought was safe.

That fall, we got a call from Guy Lavie, the commissioning editor of yesDocu, Israel’s documentary channel. “We have to do something about the whole situation,” he said. “You have to make a film about it.”

The latest attack, in a bus terminal in Be’er Sheva—a city in southern Israel—had brought new horrors. A man identified as the terrorist had been shot and brutally beaten by an angry crowd. “Everyone is shooting and stabbing,” Guy said. “There is blood everywhere.”

The terror attack in the bus terminal seemed to encapsulate the tragic “madness” of the situation. It was a microcosm of the pressure cooker that our country had become.

Minutes after the initial attack, contradicting information began to trickle out. First we heard a soldier was shot and killed by a terrorist, and many others were wounded. Then we heard there were in fact two terrorists involved—one shot dead by security forces and the other captured alive.

An hour after the attack, cellphone footage from inside the station began to circulate: images of a man labeled as the second terrorist, swimming in a pool of his own blood. He had been shot many times, and was surrounded by a frantic crowd of people who were shouting, cursing, spitting. From time to time, someone kicks him in the head or the body.

An older man—maybe 50 or 60 years old—tries to protect him. He places a bench between the man and the crowd, but it’s not a sufficient barrier. The beating continues, and the footage is incredibly difficult to watch. Still, you tell yourself: he was a terrorist. He came there to kill. You hear yourself say “In times like these, in times of war and survival…” He died on his way to the hospital.

Then, a few hours later, surprising news: the second terrorist that was captured alive in the terminal was not a terrorist after all. He was a 27-year-old Eritrean asylum seeker on his way to work, waiting for a bus. And now the word “lynch” is thrown into the digital air. And then: “animals,” “criminals,” “murderers.”

So we decided that this was going to be our film: A story about an innocent man who is brutally killed by savages. We headed south with our camera to meet the animals. To shed light on the evil dark violence of the southern province.

But that idea fell apart on the first day of shooting, and “Death in the Terminal” is an entirely different film. Our initial storytelling instinct was: go with the victim. Let the story of Habtum—the man mistaken for a terrorist—lead us to the truth. But we quickly understood that the film is not about the victim, it’s about us.  It’s a self-portrait of a society under the influence.

When we began to speak with the eyewitnesses, the line between hero and villain began to blur. And the panic and fear inside the station—the raw nerves—came into focus. What did people see? What did they think they saw? Some of the same people doing the beating were the ones who ran into the station when they heard the shots. They ran in to help. How did they end up killing an innocent man? We began to ask ourselves how we might behave in those moments after the gunshots. What would our instincts be? Do they line up with who we think we are?

We decided to try to recreate those moments—to put the audience inside the station.

We fought to get our hands on the security footage—which Israeli authorities never release to the public—and that footage is the center of the film, juxtaposed with interviews with those people who ran inside. We edited the film so that the story unfolds in real time. We wanted to make the audience feel what the eyewitnesses felt. Without orientation. Without explanation. We wanted the story to be revealed slowly, and never fully. Just like it was.

The lesson we learned along the way was a familiar one, but one we keep forgetting nonetheless: that none of us is any better, or any more righteous, than anyone else.

Stream the Topic Original Documentary “Death in the Terminal” for free starting September 6, only on Topic.com and Buzzfeed News.

This Article is related to: Toolkit and tagged Death in the Terminal, Documentary, Israel