Jamie Bell and Annette Bening are both aces in a tawdrier, more tragic, but similarly superficial noir riff on “My Week with Marilyn," which premiered at Telluride 2017. 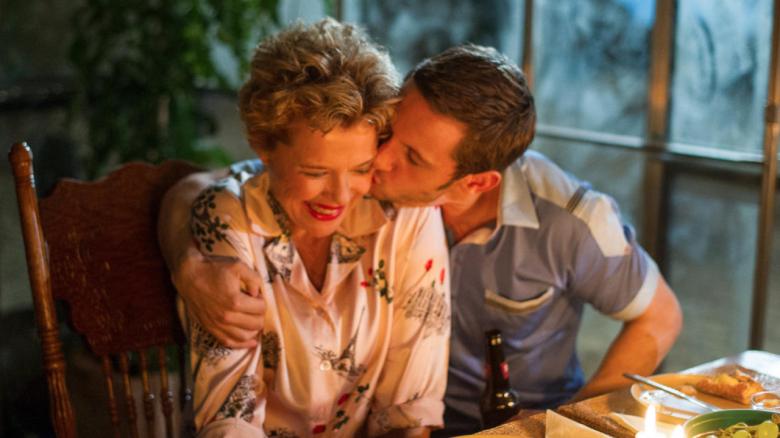 The public can’t seem to resist stories about the private lives of movie stars. We’re fascinated by who these beautiful flickering gods might be off-screen, and that fascination is exacerbated a thousand times over by the fact that these beautiful flickering gods don’t want us to know. It’s a recipe for infatuation and disaster. It’s also a recipe for some very bad movies. The truth may be stranger than fiction, but it’s awful hard to bridge the gap between the two.

“Film Stars Don’t Die in Liverpool” is a tawdrier, more tragic, but similarly superficial “My Week with Marilyn,”  devoted to the dying days of an actress who always lived in Monroe’s voluptuous shadow. By the time it ends, that darkness has grown so complete that it’s hard to tell whose story we’re even watching.

Gloria Grahame was born for black-and-white. From the arch of her brow to the bridge of her nose, her face seemed divinely engineered to allow for as many shadows as possible (not that her natural beauty ever stopped her from making adjustments). Watching her work in classics like “The Big Heat” and “The Bad and the Beautiful,” it seems as though it was impossible to light her without drawing more attention to the darkness left behind. Grahame was only in the limelight for a little while, as her career began to nosedive when Technicolor became the next big thing. She didn’t handle it well. Preoccupied with her fading youth, she began to act less often on screen and more erratically off it. Her affair with the 13-year-old stepson she was raising with director Nicholas Ray started a series of events that ended in electroshock therapy. Of course, Peter Turner (Jamie Bell) didn’t know any of that when he crossed paths with Grahame in a Liverpool flophouse more than a decade later. To him, she was just the flirty older woman next door, an eccentric stranger who danced a little too close when they grooved around her living room to the “Saturday Night Fever” soundtrack. That was in 1979, when Grahame could still hide the heartache that had driven her across the pond. This slippery drama, however, starts on a rainy night two years down the road. Directed by Paul McGuigan (“Victor Frankenstein”), and adapted from the memoir that Turner eventually wrote about his affair with the tarnished icon — but told without an iota of the intimacy that such a backstory might imply.

The film opens on Grahame as she sits in the dressing room of a Liverpool theater and gets into character. She’s in town to star in a run of “The Glass Menagerie,” but the way that Annette Bening plays her — with a slight coo in her voice, and an anxious pair of eyes that are always on the alert for affirmation — Grahame is clearly more preoccupied with performing herself.

Perhaps that’s for the best, as she collapses before she ever makes it to the stage. Peter is summoned to take her to the hospital, but Grahame insists she be taken to the Turner house instead. She doesn’t have anywhere else to go — she’s… in a lonely place. Peter obliges, and the heartfelt welcome the actress receives from the young man’s family suggests that she’s been there many times before. And so we skip back to the beginning of the end, McGuigan seamlessly moving between the years by changing sets on the fly; at times, this destabilizing device makes it seem as though Peter is watching a movie of his own memories. At other times, McGuigan’s rear-projected backgrounds evoke the unreality of Grahame’s noir masterpieces, as though Peter isn’t watching his own movie so much as he’s living one of hers. It’s in these moments, too few and few between, when the film hints at its dormant potential, using the language of film itself to express how the medium can fog up the lens through which we see the world and ourselves reflected in it. More often than not, however, Matt Greenhalgh’s script is far too straightforward for such a sordid affair, and the specificity of the drama’s first half (highlighted by two great scenes in a cinema) rots away as the story gets over the hump and begins its inevitable comedown. Eventually so generic that it might as well be about anyone, “Film Stars Don’t Die in Liverpool” creates a foul tension between the paint-by-numbers quality of its approach and the uniqueness of its affair.

Bell and Bening are left stranded in the middle, holding onto each other for dear life. Bening isn’t much of a chameleon, and she doesn’t try to disguise herself in the role. On the contrary, she understands that her performance will create a kind of double-vision, that people will see her out of one eye and Grahame out of the other, and she weaponizes that fact to her advantage. Bening delights in the occasional bit of hand-me-down noir dialogue (“I like habits, especially bad ones”), but more often than not she plays Grahame as a beautiful woman who feels betrayed by her body, who’s too preoccupied with how people are looking at her to ever be herself. Bening plays her as though that preoccupation has become who she is, but the film fights both actresses every step of the way, insisting that Grahame is just an insecure fifty-something who was haunted by the version of herself who was frozen and immortalized on celluloid. There was more to Grahame than that — there’s more to anyone than that — but “Film Stars” never tries to find it.

On paper, Bell has the more thankless role of the two, but he also finds a way to endow a frustratingly flimsy character with a singular sense of purpose. His Peter is raw and empathetic and always in the moment; Gloria is the most interesting thing that has ever happened to him, and he seizes on the opportunity with the myopic ardor of a man in love. One terrifically realized scene finds Peter, oblivious to the world, visiting Gloria in Los Angeles and eating dinner with her mom and sister (Vanessa Redgrave and Frances Barber, respectively). A naïve stranger in a cynical world, it’s touching to watch the way that Bell narrows his eyes and bobs his head as each of Gloria’s skeletons are dragged out of the closet and thrown on the dining room table. It isn’t often that you seen actor doing so much with so little.

“Film Stars Don’t Die in Liverpool” is filled with veteran British talent, and the lot of them are forced to make a mountain out of a molehill. Of the film’s many underwritten threads, the most egregiously frayed of them all is the friendship that Gloria supposedly develops with Peter’s parents (Julie Walters and Kenneth Cranham). This movie is absolutely brimming with mommy issues, and it occasionally pays them lip service in every sense of the phrase (“a son always needs his mom,” says Gloria to Peter’s, her mouth still wet with his kisses), but it never digs any deeper.

Like everything else about McGuigan’s largely forgettable misfire, this subplot earns our interest only to spite us for it. Gloria Grahame starred in too many great movies to be the subject of one this bland. As Dixon Steele once said of his time with her: “I was born when she kissed me. I died when she left me. I lived a few weeks while she loved me.” This film has nothing to add to that.

“Film Stars Don’t Die in Liverpool” premiered at the 2017 Telluride Film Festival. Sony Pictures Classics will release it in theaters on December 8th.