Jolie's immersive drama about a child surviving the Khmer Rouge is her finest directing effort yet. 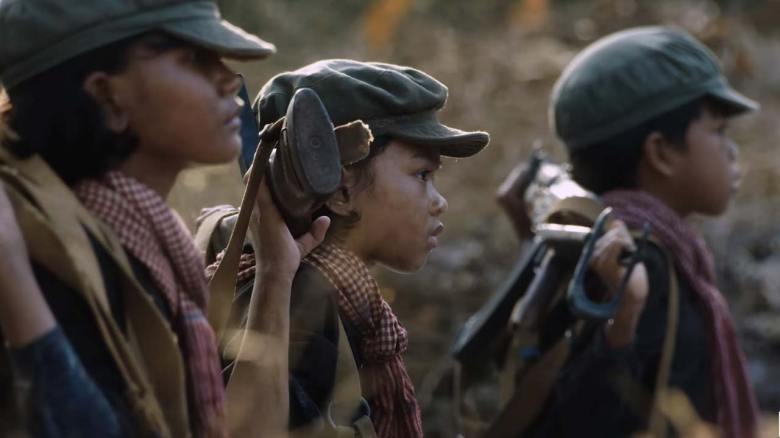 “First They Killed My Father: A Daughter of Cambodia Remembers” is the movie that Angelina Jolie has been working toward for the duration of her short filmmaking career. With each directing effort, Jolie has dismantled any semblance of the glossy stardom that burdens her reputation. Her slick 2011 debut “In the Land of Blood and Honey” was a grim tale of star-crossed lovers set against the Bosnian war, while 2014’s survival saga “Unbroken”  had the scope and visceral intensity of a WWII epic. “By the Sea” was an uneven expressionistic romance in which she co-starred alongside then-husband Brad Pitt, but it hardly glamorized the couple’s insular world.

Now comes a more focused, involving work than any of her earlier efforts, a taut wartime tale about surviving the Khmer Rouge that’s rooted in a child’s perspective rather than a simplistic, westernized gaze. Despite a few missteps, it’s the clearest illustration of her filmmaking talent to date.

Regardless of the heavyweights behind the camera — along with Jolie, the movie features competent work by veteran cinematographer Anthony Dod Mantle (“Slumdog Millionaire,” “Dogville”) and composer Marco Beltrami (“Logan”) — much of the movie resists the presumptuous overstatement that could topple its potential. Adapted from the memoir by Cambodian activist Loung Ung, who shares a screenwriting credit with the director, “First They Killed My Father” follows five-year-old Long (newcomer Sreymouch Sareum) as her family is torn from Phnom Penh to endure a dangerous nomadic life under the Pol Pot regime. The Khmer Rouge forces her through a series of work camps until she’s left to wander the wilderness of her own, bearing witness to relentless persecution that she can only comprehend in bits and pieces.

Jolie establishes this conceit with a masterful opening montage, hurtling through a collage of early ’70s archival footage in which Richard Nixon denies the secret bombing of Cambodia before withdrawing troops and leaving the menacing Khmer Rouge to take charge. As the Rolling Stones blare over the soundtrack, it seems as though “First They Killed My Father” will offer little more than a bird’s-eye view of the conflict at hand. Moments later, Jolie shifts to a shot of young Long’s reflection in a vacant television screen in her childhood home, and the media filter melts away. It’s 1975, and despite the encroaching regime, Lou exists in a bubble of idyllic juvenilia that’s about to be tested.

While it clocks in at 136 minutes, “First They Killed My Father” eschews complex plotting in favor of staying close to Loung’s limited perspective. Blithely singing along to a pop song on the radio, she overhears her parents worrying about the incoming Khmer Rouge invasion even as she fails to comprehend its ramifications. Moments later, she’s marching through the streets in a mob of thousands, her parents eager to escape the advancing troops.

As the unwieldy title implies, it’s only a matter of time before the family finds themselves at the mercy of gun-wielding soldiers, and Long’s father becomes the first victim in a slow process that forces the young girl out of her passive state. Eventually fleeing to a children’s camp, she’s exposed to aggressive propaganda and the prospects of dire punishment for disobedience, only to wind up dodging further gunfire as Vietnamese forces face off with the regime’s soldiers. Throughout she barely says a word, propelled by terror and resolve. Jolie’s filmmaking constantly pushes forward with rapid-fire editing to suggest the passage of time, but nothing tells the story more than Sareum’s face. Few contemporary movies rely so heavily on a single ongoing reaction shot to tell their stories. Non-professional actress Much comes across less as a performer than a placeholder for the events, a conceit reminiscent of silent film. That’s a tricky proposition (and one that’s exacerbated by reports of a controversial casting exercise), but the movie remains enthralling because it returns so often to Loung’s gaze.

The subtitle — “A Daughter of Cambodia Remembers” — implies that the movie exists primarily as a single, protracted memory. Lacking the maturity to respond to her world, all Loung can do is watch and process, and the movie becomes a meditation on witnessing history without having the tools to comprehend it. The only moment she understands in full is the trauma of saying goodbye to a loved one, and it arrives as an appropriately devastating crescendo.

Not everything works. As Loung wanders the dusty landscape witnessing executions and torture at every turn, the roaming plot threatens to become a grim theme-park ride through a dark chapter in history. Jolie occasionally pushes too far with the sentiment, and a closing title card celebrates the movie’s very existence with a not-so-humble pat on the back. But such shortcomings are marginalized by jarring shootouts and tense close encounters. One especially powerful scene finds a village ablaze at night while Jolie’s camera captures Long at the center of the mayhem, frozen in fear and devoid of language to assess the chaos destroying her world.

The result is relentless and involving even when it stumbles. Jolie may not be a full-fledged auteur yet, but she unquestionably possesses a singular aesthetic that courses through her work and exists completely apart from her high-profile acting career. Her movies unfold almost exclusively within the confines of claustrophobic circumstances, with characters overwhelmed by events spiraling out of control; in the process of battling through the confusion, they triumph simply by living through it.

“First They Killed My Father” premiered at the 2017 Telluride Film Festival. It premieres on Netflix on September 15.

This Article is related to: Film and tagged Angelina Jolie, First They Killed My Father, Telluride Film Festival