By Kate Erbland and Dana Harris-Bridson 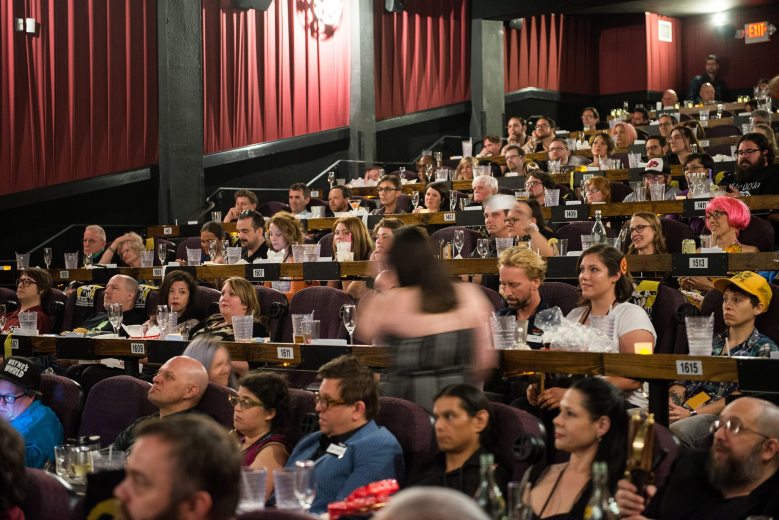 Alamo Drafthouse’s 20th anniversary party, held May 25, 2017 at the Ritz location; Jasmine Baker is third from left in seat 1609

Editor’s note: The above photograph of Jasmine Baker has been used with her full knowledge, cooperation, and consent.

An Austin-area woman said Ain’t It Cool News founder Harry Knowles sexually assaulted her at an Alamo Drafthouse event — but the reason she’s speaking out now is she believes change is coming.

“Harry Knowles groped me, opportunistically, on more than one occasion,” said Jasmine Baker. “I cannot just stay silent. I am not interested in remaining silent.”

In 1999-2000, Baker was familiar with Knowles and his website, as they often attended the same Drafthouse events. Baker was at a Drafthouse event when Knowles allegedly rubbed up against her buttocks and legs in a way that made her feel uncomfortable. While she was initially willing to consider it an accident, she said that on a later occasion he rubbed up against her again; she confronted him about his behavior, and made it clear that he did not have her consent to touch her in any manner. “He just giggled about it,” she said. On at least one occasion, Baker alleges that he also put his hand under her shirt.

IndieWire spoke with two friends of Baker’s who confirmed that she had shared stories of the incidents, and that Baker told them of multiple occurrences in which Knowles touched her without consent.

Reached by phone, Knowles responded to the charges: “I categorically deny it.” Knowles said they were friends and “she treated me like a confidante.” He said their friendship ended in 2002, shortly after Knowles and a mutual friend broke up.

The reason she’s speaking up now, Baker said, is she’s hopeful that attitudes are changing toward what’s considered acceptable behavior and how people address accusations. Baker said when she originally told mutual friends about the incident, they shrugged it off.

“That might be the boys’ club that [former Alamo Drafthouse programmer] Todd Brown is referring to [in his statement], that type of mentality of, ‘Well, what are you gonna do?’” Baker said referring to the statement by the former Fantastic Fest programmer who publicly resigned last week. “Twenty years ago, 18 years ago, women routinely were encouraged to just watch their own behavior and other people who wanted to do inappropriate things or say inappropriate things and be inappropriate and leer and be lecherous without your permission, without your consent, the air in the room was more on the side of, ‘Well, you should watch what you do,’ not, ‘Don’t touch people without their consent. No means no.'” Baker, who later worked for Drafthouse 2003-2007, said she met and became friends with Drafthouse founders Tim and Karrie League shortly after they opened their first theater in 1997. When she told the Leagues about the incidents soon after they occurred, Baker said, they “thought it was horrifying, but also didn’t know what to do.”

At the time, “their suggestion was, ‘Just avoid him,’ she said. “And I did that. In light of all that has happened for them publicly, today they might make a different choice about how to handle someone they did business with. But at that time, they were trying to bring inclusiveness to everyone and also didn’t want to confront a business partner.”

Although Knowles and Tim League went on to become two of the Fantastic Fest cofounders in 2005, in 1999 the Drafthouse started hosting the Butt-Numb-A-Thon, Knowles’ annual screening event.

Earlier this week, IndieWire reported that AICN was no longer a sponsor of this year’s Fantastic Fest, and Knowles acknowledged he wouldn’t attend the festival he co-founded. The Leagues, who declined comment through a rep, are also not participating in the festival this year.

Baker said she still considers herself an active member of the Austin film community, and believes change is coming in the wake of ongoing fallout from the Devin Faraci controversy. And while the Leagues’ initial response still upsets her, she sees change coming there as well.

“I’m not saying that the Leagues have done things correctly, or always done the right thing when problems or improprieties were brought to their attention,” she said. “However, it appears that they are really trying to do something now, the right way.”

Update: This post has been updated to better reflect the timing of when Baker first brought her allegations to the Leagues.