The Oscar winner finally gets the chance to let loose in a massive studio blockbuster, and she (obviously) does not disappoint. 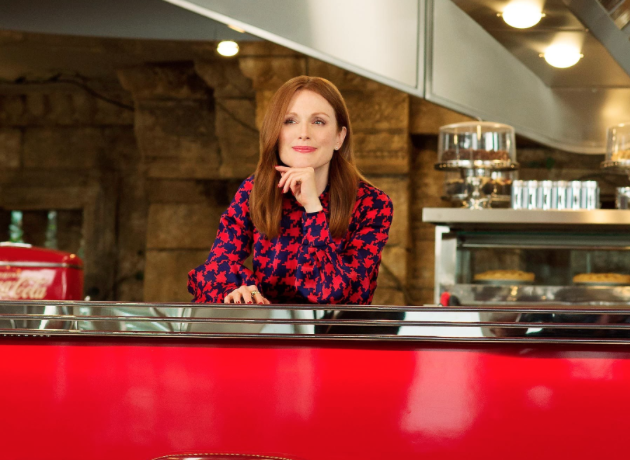 You probably want to go see “Kingsman: The Golden Circle” because you enjoyed the 2014 original, but there’s only one reason why you should actually go spend upwards of $12 to watch the sequel, and her name is Julianne Moore. Sure, Matthew Vaughn’s action scenes remain dazzlingly choreographed and new cast members Halle Berry, Pedro Pascal, and Channing Tatum are welcome additions, but Moore owns the entire movie as a scene-chewing sociopath. Sorry, Colin Firth.

The Oscar winner embraces her dark side as Poppy Adams, a global entrepreneur who wants to legalize the drug trade so that her multimillion dollar empire can operate freely in the United States. Poppy has a fetish for 1950s Americana kitsch, and Moore basically plays her as if her housewife from “Far From Heaven” were a diabolical and demonic James Bond villain — think Martha Stewart with horns. Poppy is sweet, squeaky-clean, and maternal, but she’ll throw you into a meat grinder and cook a delicious hamburger out of your guts if you don’t follow her instructions.

Poppy is far removed from a majority of the characters Moore has played across her career. The villain falls comfortably into the idiosyncratic section of her filmography, which is populated by the likes of Maude Lebowski (“The Big Lebowski”) and Havana Segrand (“Maps to the Stars”). Similar to these characters, Poppy allows Moore to flirt with a kind of madness that becomes addictive to watch. She is too good of an actress to simply go overboard and let her villain be defined by craziness, so she straddles a line where Poppy could lose it at any second.

The thrill of watching Moore as Poppy is all in the tease. Poppy is a sociopath, sure, but Moore doesn’t play her as if she’s well past the point of a psychotic snap. The actress keeps her character right on the edge, and the possibility of seeing her absolutely go nuts forces the viewer right into Moore’s palm. Moore did the exact same thing with her Cannes-winning performance as Segrand, and roles like these prove just how much control she has as a performer. At 141 minutes, “The Golden Circle” is often a bloated and numbing spy spectacle, but it’s Moore who makes it all worth it. By refusing to go over-the-top in her personality, she offers up a different brand of lunacy than Samuel L. Jackson in the original, one that is more refined and dialed back. You can tell from the opening scene that Moore interprets the character as a pragmatic lunatic. Poppy is insane, yes, but her thoughts on America’s criminalization of marijuana may not be totally crazy to some viewers. Moore goes nutty but she never goes so outlandish as to make Poppy a joke. Poppy’s got a real message, and Moore sells it with delicious authority.

“No one is having a better time in Matthew Vaughn’s ‘Kingsman: The Golden Circle’ than Julianne Moore,” IndieWire’s Kate Erbland wrote in her B- review of the movie. “She’s having the time of her life, and she gleefully zips her way through every wacky scene.”

The last time Moore went blockbuster as President Coin in “The Hunger Games” franchise, she was a reliable ensemble player who fit effortlessly at the table Francis Lawrence set. In “Kingsman: The Golden Circle,” Moore is the whole damn feast. More dramatic actors should be having this much clever fun when they have the chance to go blockbuster. If the Oscar winner is going to continue to go the studio tentpole route, then let’s make sure her roles are as movie-stealing wonderful as Poppy.

This Article is related to: Film and tagged Julianne Moore, Kingsman: The Golden Circle, Matthew Vaughn