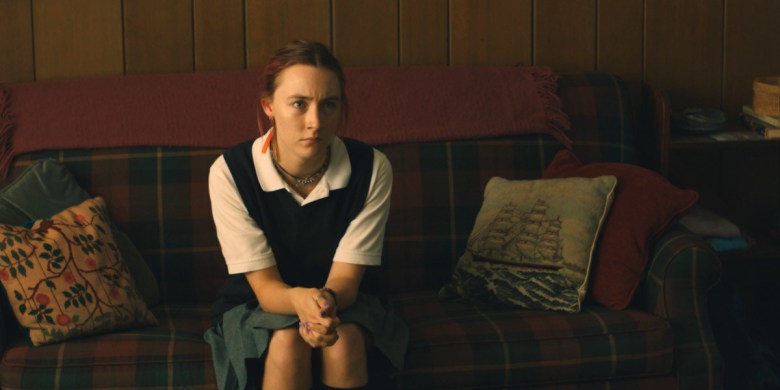 In “Lady Bird,” an angst-riddled teen copes with her restrictive Catholic high school, bickers with her doting parents, endures her first heartbreak, and dreams of escaping to a far-off place. There’s nothing fresh about that premise, but writer-director Greta Gerwig’s semi-biographical riff on her Sacramento upbringing elevates it to a new wavelength beaming with wit and insight. Anchored by Saoirse Ronan in a spunky lead role that registers as her very best, the movie confirms that Gerwig’s plucky screen presence translates into a richly confident filmmaking voice.

“Lady Bird” is both snarky and sincere — a touching, markedly feminine ode to growing up that never takes its familiarity for granted. Gerwig earns the ability to make this rite-of-passage saga her own.

“The only thing exciting about 2002 is that it’s a palindrome,” moans Christine McPherson, though she prefers the moniker Lady Bird, as her mother Marion (Laurie Metcalf) rolls her eyes while the pair ride into town. Much about Lady Bird’s attitude echoes that ambivalence. When the 17-year-old isn’t spending her time goofing around with best pal Julie (impressive newcomer Beanie Feldstein), munching on communion wafers behind the faculty’s back, and cracking wise about cute boys, she’s setting her sights on East Coast colleges that her parents assume they could never afford. While her nurse mother urges Lady Bird to think practically, her father (Tracy Letts, in a warm-hearted turn) entertains the notion of helping her obtain those goals.

In the meantime, Lady Bird’s enduring the more pressing challenges of amateur high school plays and ramshackle love affairs, pivoting between ill-advised romances with the good-natured Danny (Lucas Hedges) and chic rocker Kyle (Timothée Chalamet, a world apart from the gay teen in “Call Me By Your Name”). As Lady Bird argues with her mother time and again, their dynamic crystallizes into a passive-aggressive centerpiece that gains momentum as the story moves along. It’s ultimately a showdown between two women who both think they know what’s best for Lady Bird’s future, and just how far they’re both willing to go to make that point. Along the way, Gerwig’s delightful screenplay radiates with Lady Bird’s caustic outbursts against her surroundings (Sacramento’s “the midwest of California”) and the ephemeral highs of unruly parties, high school proms, and awkward bedroom antics. Music cues ranging from Alanis Morissette’s “Hand in My Pocket” and Dave Matthews’ “Crash Into Me” round out the period details to a remarkable degree without downgrading the material to a nostalgia trip; they merely enhance the self-contained universe of sights and sounds, emboldening Lady Bird’s youthful desire to escape her surroundings.

While it hints at melancholic details percolating throughout the McPhersons, from her father’s depression to her mother’s parental insecurities, “Lady Bird” avoids the tropes of a downbeat family drama with continuing flashes of comedic inspiration. The opening sequence is one for the ages, a deliberately paced mother-daughter fight that involves both women tearing up to “The Grapes of Wrath” on tape followed by a sudden, violent punchline that conveys the essence of the movie in a matter of minutes: smart, edgy, and unpredictable just when you think you’ve figured it out.

Though Gerwig technically co-directed the scrappy 2008 romantic drama “Nights and Weekends,” that project registers as little more than a footnote to the mature production values on display here. Elevated by Sam Levy’s intricate cinematography and Jon Brion’s soulful score, the movie presents a complete vision of angst-riddled youth in cinematic terms while remaining wholly focused on the story at hand. While it occasionally bumps up against reminders of its formulaic beats — the biggest family spats and friendship breakups arrive right on schedule — they’re rarely this polished, and energized by the naturalism of such a compelling lead performance.

Ronan’s been a major screen talent for the better part of a decade, but has never crackled with such authenticity before. At the center of every scene, she’s a feisty, insuppressible presence simultaneously at odds with her surroundings and keen on dominating them whenever she can. Undeniably reminiscent of Gerwig’s turn as a twentysomething wander in “Frances Ha,” the new movie may as well be its prequel.

But that reading hardly does justice to the real accomplishment of this wise, nuanced work. “Lady Bird” consolidates the style and sensibility of a generation caught between the last gasp of the 20th century and post-9/11 disillusionment like nothing else before. It looks back on that moment less to relish memories of a bygone era than to commune with its impact on young adults today. For Gerwig, it’s indisputable proof of a shrewd storyteller at the top of her form. The movie may capture a woman in transition, but there’s no question that its director has come of age.