The strange, octagonal, Victorian house is the true star of "mother!," and was inspired by a house laid out like the human brain. 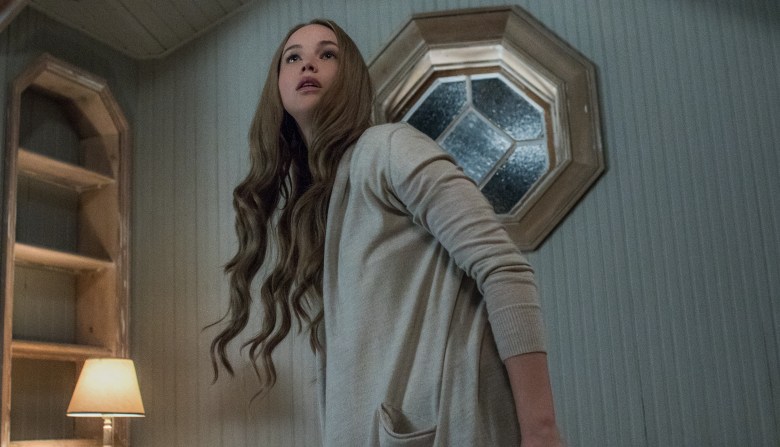 Despite the postmortems for Darren Aronofsky’s critically-polarizing and commercially disastrous “mother!,” there’s no denying the power of the extraordinary Victorian house at its center. It’s a pivotal character that pits Him (Javier Bardem) against Mother (Jennifer Lawrence) in the allegorical battle for the planet’s survival.

For production designer Philip Messina (“The Hunger Games”), creating the octagonal house offered the most unique experience in world building. “What was amazing to me was how, more than any other film, it was a symbiotic relationship between camera moves and set,” said Messina, who collaborated closely with Aronofsky’s long-time cinematographer Matthew Libatique.

“I’ve never done theater, but it reminded me how the staging of actors and sets worked,” Messina added. “This was all one environment and I knew what the camera would be doing.”

The Meaning of “mother!”

However, even though Aronofsky has been open with the press in describing “mother!” as a Garden of Eden allegory, he was never symbolically literal with Messina, which the production designer actually found empowering. Instead, the director merely asked Messina about his interpretation before hiring him.

“Jennifer is the spirit of Mother Earth, Bardem is God, the house represents the planet, and the people that come into the house are humanity,” Messina said. “Darren often said this is about the environmental impact of humanity and what we are doing to the earth. This was his framework. Bardem creates man and Ed Harris shows up; then he creates woman and the next morning Michelle Pfeiffer shows up.” While renovating the house, Mother experiences a strange symbiotic relationship, including visions of a beating heart; Him suffers writer’s block as a famous poet until the couple’s presence inspires him to writer his magnum opus about love. But then, as more and more people are drawn to the house, everything goes straight to hell in a “fever dream” of anarchy and destruction.

Interestingly, Messina’s only required viewing from Aronofsky was Luis Buñuel’s surreal Mexican classic “The Exterminating Angel” (1962), which concerns dinner guests incapable of leaving a house and the chaos and madness that ensue.

Aronofsky and Messina scouted Victorian homes in upstate New York and were immediately drawn to an octagonal design by a doctor who studied phrenology (the cranium). His house was laid out like a human brain, which seemed perfect. Aside from it being odd, it offered a unique staging opportunity.

They built two sets: A house with the entire first floor and a staircase in Montreal for daytime sequences, and a full three-story version on a soundstage for night sequences. They even played with VR (virtual reality) during prep. “I loaded a model within the Oculus system and Darren went through the 3D model with a Nintendo controller and made suggestions,” said Messina, who designed the installations for Alejandro González Iñárritu’s immersive VR experience about intense refugee border crossings, “Carne Y Arena” (“Flesh and Sand”). The interior design was a pastiche of Victorian, Gothic, shinhwa, and neo-classical designs. To prevent a sense of claustrophobia, the production designer created immense spaces with large windows, and because of the octagonal design, you could enter rooms obliquely and circle your way back to where you began. The walls were bare so the vibrant green outside the windows provided the artwork, and the characters filled in the color palette. The house was comprised of organic materials and the furnishings were all natural except for a vintage wall-mounted phone in the kitchen.

“From the very beginning, Darren said the camera’s going to be always on Mother, 360 degrees, and we broke that rule a couple of times when she occupies the house by herself and we go wider,” Messina said. “I thought about how the house could be laid out to support her point of view and I started coming up with these labyrinthian mazes with no dead ends.” Messina’s design was spatially compatible for Libatique, who shot on Super 16mm film, snaking through the house from Mother’s POV, relying on close-ups and over-the-shoulder perspectives. “Matty made the house look absolutely real when it needed to be and completely unreal when it needed to be,” Messina said.”The discussions about where it went visually were always sequential, built on visual and narrative decisions previously made. It was loose and structured at the same time.”

Aronofsky describes the wild, anarchic third act of wanton destruction as Mother’s “fever dream.” That’s when Messina’s eclectic mix of geometries, materials, and furnishings come together in sharp contrast to the violence.  They aged, burned, and destroyed the house in a Biblical apocalypse filled with fire, blood, flooding, human sacrifice, cannibalism, and even a frog. “In our discussion about staging the fever dream, Darren said there would be Molotov cocktails and then riot police and then people crashing through the window,” Messina said. “He was adamant that we stay within the confines of the house…we were going to live within the world that we built.”

This Article is related to: Awards and tagged Darren Aronofsky, Jennifer Lawrence, Mother, Top of the Line