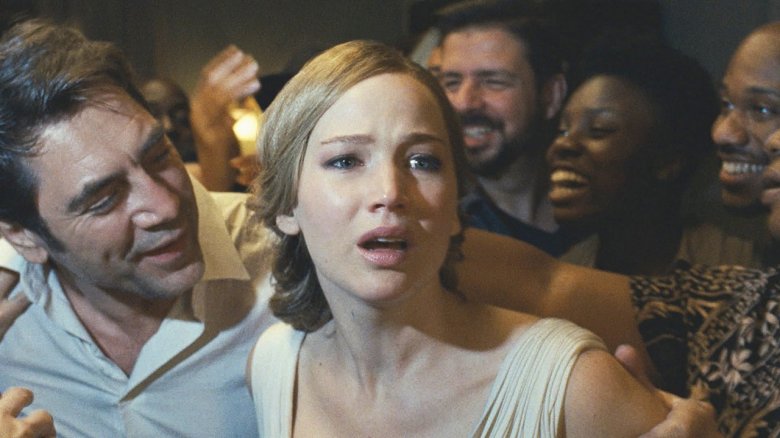 Darren Aronofsky didn’t only want to rattle audiences out of their comfort zone with his seventh feature, “mother!” He also wanted to create a challenge for his team of long-time collaborators by shaking up his approach. “We had been doing the same thing for a long time and I wanted to try a different process to see what would happen to the team if we did something where it wasn’t so much pre-production,” said Aronofsky in an interview with IndieWire.

After writing the script in what the director called a five day “fever dream” and casting the film – the pieces quickly falling together once Jennifer Lawrence signed on as the lead – Aronofsky developed the story during a secret three month rehearsal in a Brooklyn warehouse. The director started the process with Lawrence and co-star Javier Bardem in an effort to flesh out their characters and find the “real emotions” that would drive his allegory.

“From the beginning, I was like, we’re making a fully subjective movie, more than I ever had,” said Aronofsky. “I was telling the movie of mother earth. I was telling the story of people showing up and how they treat her without really being aware of her. I wanted the audience to be in Jennifer Lawrence’s character’s head the entire film and to go through that experience.” DP Matthew Libatique on the set of “mother!”

Aronofsky’s longtime cinematographer Matthew Libatique said that Aronofsky’s camera movement has increasingly become more subjective since making “The Wrestler,” but the strategy for “mother!” was more extreme: The camera would stay physically connected to the mother character the whole movie. The language of the film would essentially be limited to three types of handheld shots that followed Lawrence around the house: singles on mother, over-the-shoulder (connecting mother to her surroundings), and point-of-view shots showing what mother sees.

Like the director’s previous films, “mother!” is like a tea kettle slowly being brought to a boil as Aronofsky mounts the pressure with clockwork-like precision. Considering the self-imposed constraints of the film’s strict subjective and handheld style, this made the warehouse rehearsals vital.

“I wanted to get [the cast] the feeling of walking through the house because the house is such a big character in the film,” said Aronofsky. “And I wanted [Matty] to figure out how we were going to deal with those challenges.”

The floor plan of mother’s house – the film’s sole location – was taped out on the floor of the warehouse as Lawrence and Libatique synchronized their choreographed movement.

“There is an extreme preciseness in Darren’s language – there isn’t really this freedom you normally associate with handheld, it’s more an aesthetic he gravitates toward,” said Libatique. “That’s one reason the rehearsal was so essential. You don’t want to anticipate things when you are operating. When Jen moves, you move and it’s to the point you don’t feel like you’re just with her, you don’t feel the camera movement because everything is in sync.” The choreography was only one aspect of the subjective camera movement that would need to be pre-determined, as Aronofsky and Libatique quickly discovered how the self-imposed limitations would impact blocking, composition and editing.

“We started to realize we had to be clever blocking-wise and how close we wanted a subject to be [to Jen], because within our rules, we didn’t have traditional coverage of the other actors, so they had to exist within mother’s POV or over-shoulder,” said Libatique. “That was where we started to learn if we wanted to have a wider shot [of the other characters] we would have to stop mother earlier [and further away from the other characters].”

For example, in one scene where Lawrence’s character runs out of the kitchen to share a piece of news with her husband, Lawrence’s mark for where she needed to stop had to be pulled back to frame a shot of Bardem standing in the doorway the way Aronofsky wanted it.

Maintaining the audience’s spatial orientation was vital as the camera flowed through the house with Lawrence – something that pays huge dividends in the film’s surprising and unorthodox third act – so figuring out not only where the 180-degree line (which is used to maintain screen direction and consistent spatial understanding for the audience) would be, but which side of it they wanted to be on wasn’t always obvious. In many ways, it was like solving a puzzle.

In the last two weeks of the three month rehearsals, Aronofsky and Libatique would shoot a practice version of the entire movie with the cast, without costumes or a set, in a warehouse filled with tape marks. Editor Andrew Weisblum then quickly assembled the footage into a 110-minute cut that was screened for the crew. Darren Aronofsky on the set of “The Wrestler”

“It was definitely a useful tool for me and Matty because the camera is moving around so much, as soon as it settles knowing what side of the line to be on was very important, because that would then trigger the next shot,” said Aronofsky of the practice version. “Sometimes we’d end up going down a few shots and run into a dead end and we’re like, ‘oh shit, we really should be on the other side.’ So we would have to backtrack four master shots to figure out how to get there.”

Libatique said their instinct throughout rehearsal was to extend every shot as long as possible, but that with all of the change of directions as Lawrence scurries around the house in an increasing panic, he and Aronofsky started seeing the need to establish cut points.

“Because we had limited language we had to make sure editorial we were covered in terms of what can we go to if a moment was taking too long,” said Libatique. “What do we go to if we need to gain more urgency and get over her shoulder quicker? We would need a cut point, so we started to pick and chose when we wanted to do those things.”

Even having allowed for pre-determined transitions, it was Aronofsky and Weisblum’s longest and most challenging edit since they started collaborating on “The Wrestler.” The story, which took five days to write, would need 53 weeks to edit. Lawrence’s serves as the emotional anchor for the film, and she appears in close-up for a full 66 minutes of the 121-minute running time. But since the film’s rhythm keeps changing, he needed to be inventive about how she shaped the film without the normal coverage options.

“Editorially, Darren and Andy found a nice balance so that the movement is still in the film,” said Libatique. “It’s a delicate balance – all the language and atmosphere we intended is there, while the film builds full blast to the intensity of the payoff. That’s not easy.”