No matter how old you are, this is the kind of movie that your parents would like (but they're going to need a Netflix account). 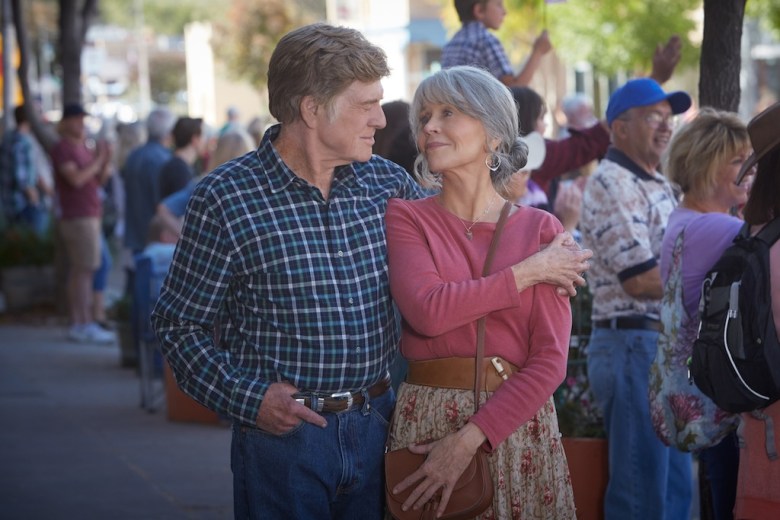 “Our Souls at Night”

Told with with the gentle touch of a partner taking your arm on an afternoon stroll, Ritesh Batra’s “Our Souls at Night” is a wise and wistful drama about life after death; regardless of how old you are, this is the kind of movie that your parents would like. It begins with the folksy twang of a guitar and shots of streetlights blinking awake as night falls on a small Colorado town. A widower named Louis Waters (Robert Redford) sits alone in the kitchen of a house that was clearly meant for two. This is the only sort of night that he has. At least, until it isn’t. There’s someone at the door — his neighbor, Addie Moore (Jane Fonda), also on her own — and she wants to know if Louis might be interested in sleeping with her. Literally sleeping with her. It’s not about sex, it’s just about “getting through the night.” They both agree that nights are the worst.

Although, it’s easy to understand how it could be about sex: Redford is 81, Fonda is 79, and both of them still look better than most of us ever will. Their posture is so obscenely perfect that the movie feels like it could veer into science-fiction at any moment. There’s something palpable simmering between them, and it’s crucial to a story that requires you not to pity its characters. On the contrary, this unfailingly polite film only works so well because it never others the old people, it never severs the line between your life and theirs. “Our Souls at Night” has all the narrative momentum of a semicolon, and the only thing that keeps it lumbering forward is the belief that getting into bed together every night gives Louis and Addie enough reason to get out of bed every morning.

Based on the last novel that Kent Haruf wrote before he died in 2014, and adapted to the screen by “(500) Days of Summer” scribes Scott Neustadter and Michael H. Weber (who handle the material with a sensitivity that belies their youth), “Our Souls at Night” finds people still fumbling their way through life even as the sun is going down. Louis and Addie are great foils for each other, though the film is subtle enough not to make a big deal out of it. He has already internalized the fact that he’s given up; he’s found purgatory on Earth. Louis wears virtually the same thing every day — he has a closet that’s full of nothing but blue plaid shirts — he stills sports his wedding ring, and he only goes out to grab a bite with his buddies at the local coffee shop.

Well, they’re not that close; these men, even in their limited screen time, seem to feed off their collective misery. The most vocal member of their group is a guy named Dorlan, and he’s played by Bruce Dern (in case you didn’t take the thing about the guitar twang seriously, this is a movie in which there’s a grouchy character named Dorlan who’s played by Bruce Dern). Redford could do this kind of thing in his sleep, but he doesn’t. He’s fully present for every moment, and while Louis isn’t an outwardly sentiment man, you can sense the legendary actor feeling his way through every moment, absorbing the pain and trying to push through it.

If it weren’t for Addie, Louis certainly would have continued eating his dinners alone until someone found him dead in his kitchen one day. If she’s not his opposite, then at least she’s trying to be. She’s the one who offers her bed to Louis, and she’s the one who insists that he use the front door, regardless of what the neighbors might gossip (the film doesn’t dwell on the idea that people limit their happiness because they’re afraid of what the world is going to think of them, but it correctly identifies that as its own kind of death sentence). Fonda, whose role on “Grace and Frankie” has served as excellent practice for this part, does a phenomenal job of threading the needle between eagerness and desperation.

Unfortunately, the film doesn’t always give Fonda the support she needs. The guilt that Addie supposedly feels about a terrible accident from her past is never adequately addressed, and the decision to cast Matthias Schoenaerts as her beefy, troubled, perceptibly European son is borderline disastrous (who the hell was the kid’s father, Dolph Lundgren?). So far as the side plots are concerned, Addie’s grandson is a much less enervating presence. Played by Young Sheldon himself (Iain Armitage), little Jamie helps to galvanize Louis and Addie into something of a couple. All he has to do is bop around them and be a child and it’s enough to suggest that love can be a nurturing force at any age — a sharp contrast from movies like “Grumpy Old Men,” which treat it like a distraction before death.

“Our Souls at Night” is a small film, and it’s often such a placid one that it feels like it’s standing in place. Batra is a competent director, but he frames every boring shot of this story with the plainness of someone who knew that it almost exclusively be screened on iPhones (Netflix’s approach to narrative features never really makes any sense, but it’s very hard to overlook that this one is targeted at the one demographic that still reliably goes to the cinema). Still, all that gentleness is deceiving, as Addie and Louis’ relationship ultimately confronts a number of difficult topics head-on, from the difficulty of fixing mistakes to the even greater difficulty of living with the ones that you can’t. The ending may be strained, but it works its way to just the right sentiment. Nights are the worst, but they don’t have to be so bad.

“Our Souls at Night” will be available to stream on Netflix on September 29.

This Article is related to: Film and tagged Netflix, Our Souls at Night, Reviews, Robert Redford